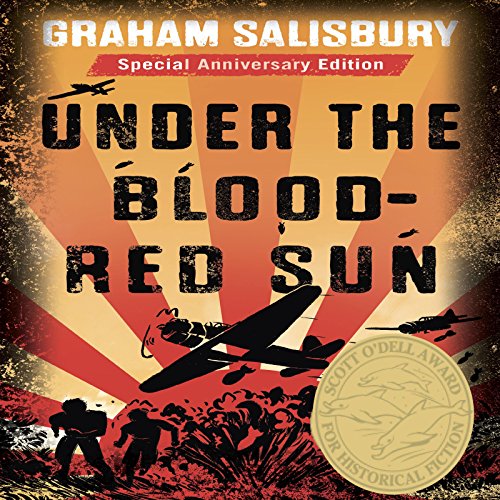 Under the Blood-Red Sun

By: Graham Salisbury
Narrated by: Greg Watanabe
Try for £0.00

Tomi was born in Hawaii. His grandfather and parents were born in Japan and came to America to escape poverty. World War II seems far away from Tomi and his friends, who are too busy playing ball on their eighth-grade team, the Rats.

But then Pearl Harbor is attacked by the Japanese, and the United States declares war on Japan. Japanese men are rounded up, and Tomi’s father and grandfather are arrested.

It’s a terrifying time to be Japanese in America. But one thing doesn’t change: the loyalty of Tomi’s buddies, the Rats.

Winner of the Scott O’Dell Award for Historical Fiction. An ALA Best Book for Young Adults. A Booklist Children’s Editor’s Choice.

What listeners say about Under the Blood-Red Sun

I read this ALA notable book when it first came out and loved it. The story starts shortly before the bombing of Pearl Harbor and opens the life of a young Japanese American, Tomikazu and his family living near the harbor. After you "see" his normal life with racing pigeons, baseball, school, deep sea fishing, friends & family... the bombs fall and we then watch as his family is torn apart and he steps up to help. Covering material similar to "The Corner of Bitter & Sweet" and "Tallgrass," this is aimed for a younger audience... I'd guess 6th to 9th grade.

The book opens slowly and the narrator has a slow "Hawaiian" pace... I was antsy at first, but after the bombs fall and the plot picked up I didn't notice it as much. I'd be tempted to increase the speed if I read again. This would be a good book to listen to with a child... opening topics for discussion like history, war, loss, discrimination, patriotism, fear, courage, change and bullies. These kinda hard topics aren't as much fun as some fiction but still needed for a well rounded education. Older teens/adults would enjoy "Tallgrass."

What would you do if your country hated you? Could you display honorable behavior or not?

These are questions that young Tommy (pronounced toe-me must struggle to answer for himself in order to find his place in the world around him. Why because the year is 1941 and the United States is at war. Ordinarily, this wouldn't be a big problem for someone this boy's age given that they probably be busy with school and other things but Tommy well he has a slight problem. What problem you ask, if you'd like to know that I highly recommend you begin reading under the blood-red sun by Graham Saulsberry it's the first book in a four-book series of historical fiction books suitable for readers of about 12 or so. Why 12 kids well because then you'll be roughly around the same age as the boy in the story. It's time for an indenture. Happy reading to all, PS. The name of the series is prisoners of the Empire for those who would like to know

Enjoyable story, although I wish it had gone deeper into the injustices they faced.

When you read the book itself it is really long. It goes really slow to but over all it is a good book

It wasn't quite what I thought.... But I like to hear about the the Japanese American families in Hawaii during ww2. Good book.