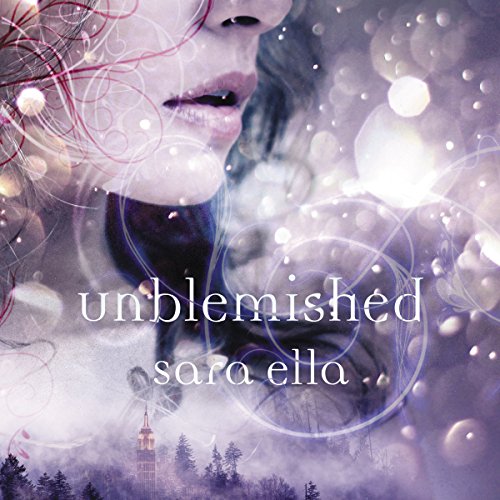 By: Sara Ella
Narrated by: Hayley Cresswell
Try for £0.00

"A breathtaking fantasy set in an extraordinary fairy-tale world, with deceptive twists and an addictively adorable cast who are illusory to the end. Just when I thought I'd figured each out, Sara Ella sent me for another ride. A wholly original story, Unblemished begins as a sweet melody and quickly becomes an anthem of the heart. And I'm singing my soul out. Fans of Once Upon a Time and Julie Kagawa, brace yourselves.” (Mary Weber, award-winning author of the Storm Siren Trilogy)

Eliyana can't bear to look at her own reflection. But what if that were only one Reflection - one world? What if another world exists where her blemish could become her strength?

Eliyana is used to the shadows. With a birthmark covering half her face, she just hopes to graduate high school unscathed. That is, until Joshua hops a fence and changes her perspective. No one, aside from her mother, has ever treated her like he does: normal. Maybe even beautiful. Because of Joshua, Eliyana finally begins to believe she could be loved.

But one night her mother doesn't come home, and that's when everything gets weird. Now Joshua is her new, and rather reluctant, legal guardian. Add a hooded stalker and a Central Park battle to the mix and you've gone from weird to otherworldly.

Eliyana soon finds herself in a world much larger and more complicated than she's ever known. A world enslaved by a powerful and vile man. And Eliyana holds the answer to defeating him. How can an ordinary girl, a blemished girl, become a savior when she can't even save herself?

"Self-worth and destiny collide in this twisty-turny fantasy full of surprise and heart. Propelled into a world she knows nothing about, Eliyana learns that the birthmark she despises is not quite the superficial curse she thought it was - it's worse, and the mark comes with a heavy responsibility. With charm and wit, author Sara Ella delivers Unblemished, a magical story with a compelling message and a unique take on the perils of Central Park." (Shannon Dittemore, author of the Angel Eyes trilogy)

"Unblemished is an enchanting, beautifully written adventure with a pitch-perfect blend of fantasy, realism, and romance. Move this one to the top of your TBR pile and clear your schedule - you won't want to put it down!" (Lorie Langdon, author of the Amazon best-selling Doon series)

"Unblemished had me from the first chapter - mystery, romance, and mind-blowing twists and turns that I so did not see coming! The worlds Sara Ella builds are complex and seamless; the characters she creates are beautifully flawed. [Listeners] are sure to love this book and finish it, as I did, begging for more!” (Krista McGee, author of the Anomaly trilogy)

What listeners say about Unblemished

Possibly ok if you're a young teen

This is not one of those YA adults that works well for adults. To be fair I only got about halfway through and I just couldn't take it anymore. Maybe the author miraculously made the main character semi-interesting and less whiny and I missed it. Not finishing a book is seriously rare for me. I listened to the audiobook which had a good narrator but even she couldn't save this.

This book is written in present tense which is irritating all on its own. There is no real character development. Everything in this book is quite superficial. The birthmark of the main character is her defining trait. It's the reason she thinks she has never had friends. Seriously? Maybe if the author would have given her some other factor to determine her personality besides appearance she would have met people who wanted to spend time with her. I wouldn't want to be around someone who complained about being ugly so often either. We don't know if she's kind if she likes animals or children or helping others, or if she particularly talented at anything. There was mention of her singing but I don't know if this was a regular thing. It was as close as we came to her having something that would have potentially made her a bit interesting.

The main thing we hear is whining about her birthmark. A LOT. So much so that she is still focused on it even at her mom's memorial. She seems more upset by here &quot;ug mug&quot; as she puts it than by the death of her mother who was her best friend. The number of times this girl complained about her appearance was extremely aggravating. I get that it's the main point of the story, but the neverending &quot;poor me, I'm so ugly&quot; crap got old fast. It seemed odd how much time the author spent describing physical appearances of things but not personality or anything else that might make you like any of the characters much. There is a lot of repetition in the descriptions as well. I'm not sure how many times we need to be told she is wearing tan ugg boots for example.

This next thing would not likely bother you unless you're a musician. The author used an abundance of music metaphors. As a musician, I would normally love this. When it's done well it can create a beautiful tone. SO many of the terms the author used were wrong. I just kept thinking &quot;I don't think that word means what you think it means&quot;. This is one of my lesser complaints about the book considering most wouldn't likely notice it.