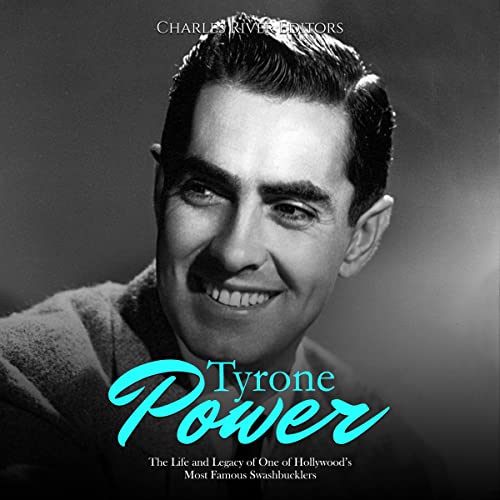 By: Charles River Editors
Narrated by: Steve Knupp
Try for £0.00

"Tyrone Power was the god of my adolescence. I would return to see his pictures over and over again. I would go first thing in the morning and stay through the last showing at night." (Sophia Loren)

Hollywood has never lacked leading men who could captivate viewers with dramatic performances that depict them as suave romantics or dashing heroes, especially during the Golden Age of Hollywood, when stars like Humphrey Bogart, Clark Gable, and Cary Grant graced screens. But in the mid-20th century, one of the most popular stars was a man who’s been frequently overlooked.

At the time, the studio system was still in full force, so rather than signing contracts on a film-by-film basis, actors and actresses signed long-term contracts with individual studios and remained under the authority of the studio head during that period. These men not only dictated which film roles one could accept, but many aspects of an actor’s personal life as well. A legion of talent scouts remained occupied with finding and developing young talent, so not even the star of the studio could rest easy or make outlandish demands for fear of being eventually replaced. For an actor to pursue a separate project, he was required to be “loaned out” by his studio in either an artist exchange or some financially advantageous arrangement.

Some actors were recruited based on their appearance alone, signing contracts before taking screen tests or ever having been on a stage or set. Others became overnight sensations, darlings of the public for decades. Only a few of these turned out to be excellent actors, but one of them was certainly Tyrone Power, one of Hollywood’s leading men from the 1930s into the 1950s. With a career spanning over 50 films, Power did not have to work through the system, rising to the top almost immediately at the age of 22.

Power was named “King of the Movies” for three straight years (1939 -1941) by fans, and while critics claimed that his success came from his good looks, today he is acknowledged as a good actor, among the most underestimated of this era. Power starred in a variety of film genres, and at least some contemporaries made note of his “remarkable acting range.” This included several musicals such as Alexander’s Ragtime Band, Second Fiddle, Rose of Washington Square, and The Eddy Duchin Story. He also made appearances in several dramas, including Johnny Apollo, Witness for the Prosecution, Crash Drive, and The Razor’s Edge. Power was even known for a good comedic sense in films like The Luck of the Irish, That Wonderful Urge, and Love is News.

For most viewers, however, Power was the best swashbuckler in the business, the perfect heir to Errol Flynn and the Fairbanks men. The Mask of Zorro has been immortalized in Hollywood history alongside The Black Swan, Prince of Foxes, The Black Rose, and Captain from Castile, and thanks to his “seemingly charmed life,” Power appeared with the best actors and actresses of his era and was directed by some of the biggest names in the business. He “traveled in circles of influential filmmakers, was loved by moviegoers, and was recognized as King of the Fox lot." Within six months of his first breakout role, imprints of his feet and hands were placed in cement at the famous Grauman’s Chinese Theatre. The inscription bore a tribute to the theatrical legacy of his family: “To Sid – following in my father’s footsteps.”

What listeners say about Tyrone Power