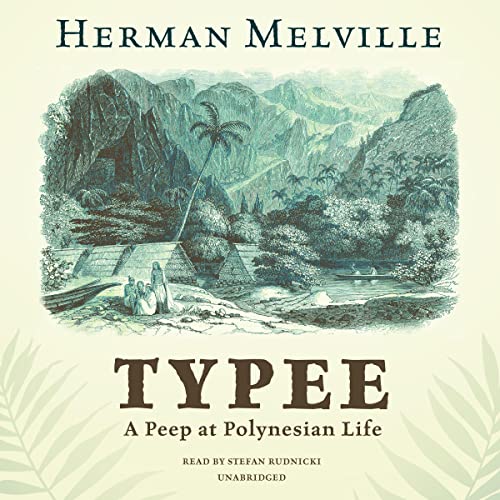 By: Herman Melville
Narrated by: Stefan Rudnicki
Try for £0.00

“I may truly pronounce the Typees to be as polished a community as ever the sun shone upon.”

Herman Melville’s first novel, Typee: A Peep at Polynesian Life, is a fictionalized account of his time in the South Pacific Marquesas Islands, and it was his most popular work during his lifetime.

Tommo has been aboard a whaling ship for six months of grueling travel when he decides, with his friend Toby, to escape and hide on a wild island. They are not alone on Nukuheva. The island is home to a tribe called the Typees known for being cannibals. But when Tommo breaks his leg, they can no longer avoid the valley the Typees call home. They venture down into the tribe’s territory, but instead of the violence they have been expecting, the Typees greet them happily with food and shelter. Tommo and Toby quickly become accustomed to life in the tribe and even prefer aspects of island life to their life in so-called “civilized” society, but they are unable to squash their fear of the rumored cannibalism.

Even with Tommo and Toby’s fears of the island and its people, Melville’s novel acknowledges the hypocrisy of the violence of English and American missionaries on these communities when confronted with their own terror of unfamiliar customs.

What listeners say about Typee