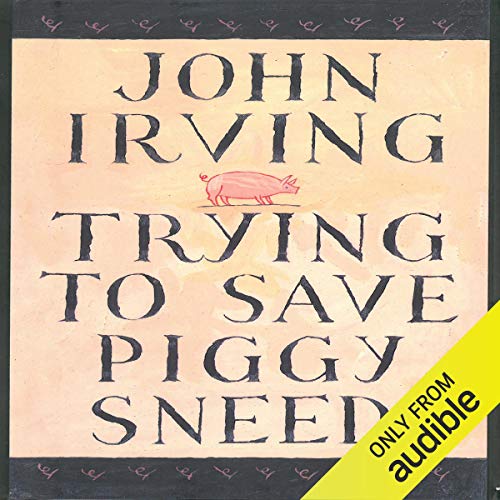 Trying to Save Piggy Sneed

By: John Irving
Narrated by: Joe Barrett
Try for £0.00

Trying to Save Piggy Sneed contains a dozen short works by John Irving, beginning with three memoirs, including an account of Mr. Irving’s dinner with President Ronald Reagan at the White House. The longest of the memoirs, The Imaginary Girlfriend,” is the core of this collection.

The middle section of the book is fiction. Since the publication of his first novel, Setting Free the Bears, in 1968, John Irving has written 12 more novels but only half a dozen stories that he considers finished”: they are all published here, including Interiors,” which won the O. Henry Award. In the third and final section are three essays of appreciation: one on Gnter Grass, two on Charles Dickens.

To each of the 12 pieces, Mr. Irving has contributed his Author’s Notes. These notes provide some perspective on the circumstances surrounding the writing of each piece - for example, an election-year diary of the Bush-Clinton campaigns accompanies Mr. Irving’s memoir of his dinner with President Reagan; and the notes to one of his short stories explain that the story was presented and sold to Playboy as the work of a woman.

Trying to Save Piggy Sneed is both as moving and as mischievous as readers would expect from the author of The World According to Garp, The Cider House Rules, A Prayer of Owen Meany, A Widow for One Year, and In One Person. And Mr. Irving’s concise autobiography, The Imaginary Girlfriend,” is both a work of the utmost literary accomplishment and a paradigm for living.

What listeners say about Trying to Save Piggy Sneed

Loved this series of memoir essays from John Irving. His final essay charting his earlier life as a competitive wrestler (My Imaginary Girlfriend) is compulsive listening. Joe Barrett's reading style is perfect for the world according to Irving.

Much to enjoy - but where are his novels?

My indifferent 3 star rating is because these shorts cannot compete with the brilliance of his wonderful 5 star novels. John Irving is one of the USA's greatest living novelists, has rarely written short stories, and this is the only collection published. So I listened partly through curiosity, partly out of frustration that audible UK doesn't make many of his novels available. Publishing wrangles maybe?

First published in 1996, the collection is quite a mixed bag and has aged well. The same sly wit that illuminates his novels is well in evidence both in the stories and memoirs. Each piece is followed by some interesting "author's notes" which give extra context. Narration is good. Overall, I think existing Irving fans will find much to enjoy, but anyone else should probably start with one of his novels.

John Irving is always a joy to read / listen to

Loved this series of essays / chapters about various writings, writers, family members, experiences. Irving is always wonderfully honest, has such a fantastic eye, warmth and wit and I love Joe Barrett's reading which is so intertwined with Irving now that I can't imagine his voice separated out from the work.

A collection of memoirs, short stories, and literary criticism essays. Despite this audiobook being described as unabridged, the longest of the memoirs, "The Imaginary Girlfriend,” the core of this collection, is missing from the audiobook. I will never be able to hear this "work of the utmost literary accomplishment and a paradigm for living." The other dozen (minus one) short works by John Irving were okay. I enjoyed Irving's essay "The King of the Novel" the most.

First off. I like some John Irving novels, some very much, But this was like watching the greatest Magician show you a trick and then explain how it’s done and then make you feel stupid for not having figured it out, while at the same time telling you how brilliant he was for coming up with such an amazing trick.

Some of the shorts were good, some okay and some long winded and self serving to show you how we’ll read the author is.

Joe Barrett is great, but could not save you from the self grandiosity of Irving’s s writers notes.

started with cruel story...I never got passed that

I wanted to like this book and I tried to finish but just never really got passed how much I disliked the first story, even though the next few were a little better. I finally gave up when I realized listening was just becoming tedious.

I expect all Audible recordings to be unabridged. This one is missing a section in the author’s comments on wrestling. Having read the book, I was disappointed by this gap. Otherwise a splendid recording. Joe Barrett is marvelous.

Sometimes it's better not to know about political views of your favorite author. I wasn't happy to learn how snobbish and non tolerant the author is((((

Little too dark for my taste and a real downer. Most of Irving stuff I really love and see some healing through the hard stuff. This one just left me feeling icky.

Excellent For A Fan Of John Irving

I very much enjoyed this entire book. From his hilarious roasting of Dan Quayle to his defense of his love for Charles Dickenson. I loved all the fictional stories included as well. if you're a long time fan of his work, you'll love it.

I just love all of John Irving's work and his comm

course I love this book Memoirs comments dissertations and by John Irving and other great authors writers people dogs et. all!!!