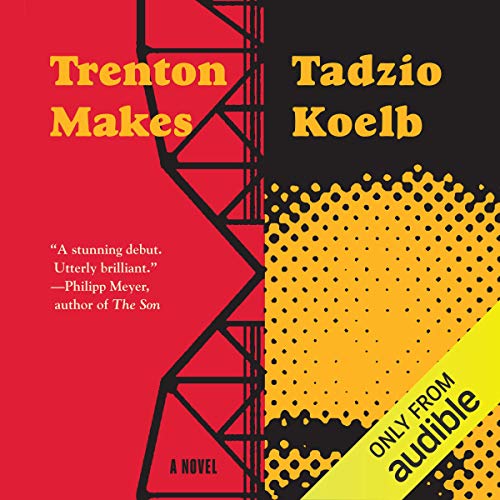 By: Tadzio Koelb
Narrated by: Patricia Rodriguez
Try for £0.00

A vivid, brutal, razor-sharp debut about a woman who carves out her share of the American dream by living as a man.

1946: at the apogee of the American Century, the confidence inspired by victory in World War II has spawned a culture of suffocating conformity in thrall to the cult of masculine privilege. In the hardscrabble industrial city of Trenton, New Jersey, a woman made strong by wartime factory work kills her army veteran husband in a domestic brawl, disposes of his body and assumes his identity.

As Abe Kunstler, he secures a job in a wire rope factory, buys a car and successfully woos Inez, an alcoholic dime dancer. He makes a home with her, but for Abe, this is not enough: to complete his transformation, he needs a son.

1971: a very different war is underway. The certainties of midcentury triumphalism are a distant, bitter memory, and Trenton's heyday as a factory town is long past. As the sign on the famous bridge says, 'Trenton Makes, the World Takes'. The family life Abe has so carefully constructed is crumbling under the intolerable pressures of his long ruse. Desperate to hold on to what he has left, Abe searches for solutions in the dying city.

Written in brilliantly stylised prose, this gripping narrative is a provocative and incisive exploration of the nature of identity and a disturbing portrait of desperation. Tadzio Koelb has crafted a slim gut shot of a novel that heralds the arrival of a writer of startling talent and imagination.

What listeners say about Trenton Makes