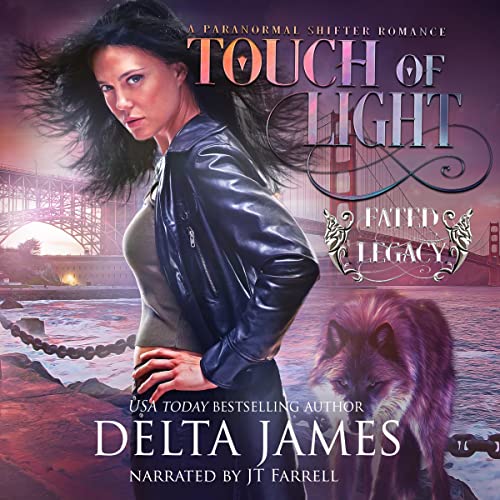 The Darkness has risen and has a new host in its grasp.

I have known Jed Steele my whole life. It isn’t until he sees me walking in the family's vineyards in Tuscany that he decides I am his fated mate.

I have my life planned, and it does not include a fated mate. A job offer in San Francisco combined with an invitation to visit New Orleans for a friend’s restaurant opening gives me the perfect excuse for leaving home. He can’t claim me if I am not here.

The trip was supposed to be the beginning of something new and exciting. Instead, it has turned into a nightmare. Evil was waiting for me, and its powers are growing. Only a force greater than evil can stop what’s coming next.

An ancient evil is on the rise. Will they be able to work together before the evil extinguishes the light?

Author note: Touch of Light is a friends-to-lovers supernatural romance with steamy heat in and out of the bedroom. Includes a protective fated mate who refuses to give up on his mate even when the darkness possesses her.

What listeners say about Touch of Light

This is a great book in the Fated Legacy series. It takes place in our future. The evil from the previous book is looking for a new host body. I am looking forward to finding out how Ms. James wraps up this evil. JT Farrell did his usual outstanding job with the narration. I received this free copy audiobook at my request and have voluntarily left this review.

This series gets better and better! The blackness moved on to Kat, and she’s scared. She doesn’t know how it happened or if it’ll kill her. She tried to send Simon away to protect him but you know how that ended!
Delta has such a gift sand JT is a master of voices!

I love this new series this is the next Generation to the wayward mates series !!!
I love that we get to see what happens with them
what a tantalizing tingling read it was sizzling hot with some action, there was a heart pounding love story between too amazing characters this was Fresh, vibrant and sensational..”

JT did a fantastic job narrating this sinful Masterpiece!!!!!!