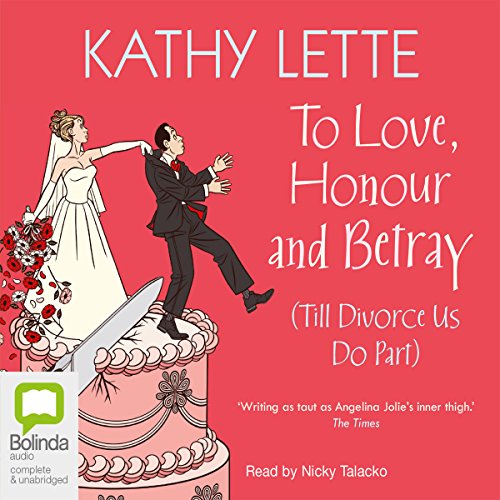 To Love, Honour and Betray

By: Kathy Lette
Narrated by: Nicky Talacko
Try for £0.00

Forty-two-year-old Lucy has read articles about the effect of divorce on teenage children. So when Lucy’s husband leaves her, Lucy’s counting on her daughter blaming herself. That’s just the kind of twisted wit that that fills this barbed comedy by Australian ex-pat Kathy Lette.

Lette, whose previous book is called How to Kill Your Husband (and Other Handy Household Hints), specializes in outlandish but plausible scenarios and comic zingers. Performer Nicky Talacko is up to to the task - especially when she voices Lucy’s petulant and annoyed teenage daughter. Part Nora Ephron, part Carl Hiaasen, this is a comic fiasco not to be missed...unless you don’t like to laugh.

Here's the latest hilarious listen from the one and only Kathy Lette.

When Lucy's husband of 18 years runs out on her, she'll do anything to win him back. Including climbing out of her bedroom window at one in the morning wearing her daughter's mini skirt. Jasper has left Lucy for her best friend, the chic and thin interior decorator Renee. To make matters worse, her teenage daughter Tally, blames her mum: "Dad left because you've let yourself go, you're overweight and you nagged him. No wonder he buggered off."

While Tally is busy trying to find a loophole in her birth certificate so she can put herself up for adoption, Lucy's tries to accept that a child is for life and not just for Christmas. Although a signed-up member of Underachievers Anonymous, in Lucy's quest to win back her husband she learns to be a surf life saver, loses weight, and gets a job. She also falls in lust, finding herself torn between an older and a much younger man.

But it's not until Lucy makes the Freudian discovery that her toy boy is also dating her daughter - and that he's been paid to do so by her conniving ex as ammunition for a custody battle, that she finally learns to stand on her own two stilettos.

What listeners say about To Love, Honour and Betray

What would you do if after being relocated to Oz by your husband with your two children you discovered he had committed the ultimate betrayal and left you for another woman, a woman who you thought you knew well.This is the dilemma which meets our unfortunate heroine in this stonking listen.The charaters are well written and the story is well narrated,if your ok with Austrailan accents.There are a few twists to the plot which are refreshing, after all how many time can you write a story about being ditched for another woman and manage to inject something new and less predictable to the plot. I think this has been successfully achieved and the ending was satisfactory without being in the slightest bit mushy. Go Kathy !

I know I'm not meant to be the target readership for Lette's books, but my dislike of this book is less to do with its chick-lit catchment and more to do with the fact the author has written this by numbers. Take an excerpt from any of her last half dozen books and see if you can tell them apart. With the exception of the book's scenery, there is nothing new here and nothing worth reading. I wonder what the next book will be about: take one sharp witted, gag-firing, downtrodden, dysfunctional woman with a useless man in her life, throw in as many 'battle of the sexes' gags as a page can bare, and you've got her next plot.

Does what it says on the tin

I download books to listen to whilst marathon training. I therefore pick books which are relatively 'easy listening' - with a simple narrative which is quite easy to follow and it doesn't matter if I "miss bits" if I get distracted. I usually go for autobiographies but this time I decided to go for a "beach read".

I found the narrator's voice incredibly grating (although she didn't have much to work with!) The protagonist was nauseating and repetitive - if she gave any more self deprecating comments in the form "I'm so x, I'm y" I was ready to throw myself into oncoming traffic!

That said, it was exactly what it said on the tin. Very easy listening and easy to follow - a predictable love story (although with a slightly surprising twist!).

Would you recommend To Love, Honour and Betray to your friends? Why or why not?

Would you be willing to try another one of Nicky Talacko’s performances?

Probably not - I found her voice quite annoying (although that could be partly the material she was working with). She did differentiate the characters well though,

Sadness (the way Natalia treated her mother early on).


Some originality would have helped a great deal I loved her book How to Kill Your Husband and other household hints, it had me laughing out loud but this book was a huge disappointment. It was writing by numbers just a different setting and although I carried on reading it by the end I'd lost the will to live and I didn't care about what happened to any of the characters in the book - no effort made at all.

What was most disappointing about Kathy Lette’s story?
No effort at all to make it different or original....she can write so much better than this

How did the narrator detract from the book?
Didn't like her voice - it just became quite irritating but that may be because the book was so painful to listen to.

What character would you cut from To Love, Honour and Betray?
All of them no originality, downtrodden wife, horrid hormonal, rebellious teenager, sensible friend, expensively dress but emotionally vacant beautiful mistress and menopausal ok yah husband....

Any additional comments?
Go back and use her imagination and be original and not churn out formulatic rubbish like this book

To Love, Honour and Betray

From start to finish this is excellent!. A well written, and particularly well read book that follows on in the humorous and engaging style of Kathy Lette. I would certainly recommend this.

Worthy of your "Credit"

very entertaining - enjoyed it very much and Nicky Talacko is still the best narrator in my book (pun intended)!!! I would listen to any book she narrated!

Way too many not-so-funny one liners!

Although the story was a nice, light read, I was tired of the one liners by chapter 3. It seemed the author was trying too hard to be funny, slipping somewhat humorous quips in just about every paragraph. It made it very difficult for me to get through the book without being annoyed and rolling my eyes. Too much!

Would you try another book from Kathy Lette and/or Nicky Talacko?

No.This is the first novel I've read by Kathy Lette and it will be my last. The story is poorly constructed and so predictable.

Has To Love, Honour and Betray turned you off from other books in this genre?

No, it hasn't put me off the genre. I've read some excellent novels in the past by other authors and I'm sure I will again.

Would you be willing to try another one of Nicky Talacko’s performances?

The narrator's performance was abysmal and when narrating the parts of the Australian characters the accent used was grating to listen to. I will be avoiding books narrated by Nicky Talacko in the future.

None that I can think of.

What Woman would allow this?

I have a really hard time imagining that any woman would put up with a man like this and still want him back. For that reason I could barely get through this book. I was so frustrated with this woman. And the disrespect from her daughter was utterly riduculous. I was not impressed by the writing in this book; I found it very un-realistic.