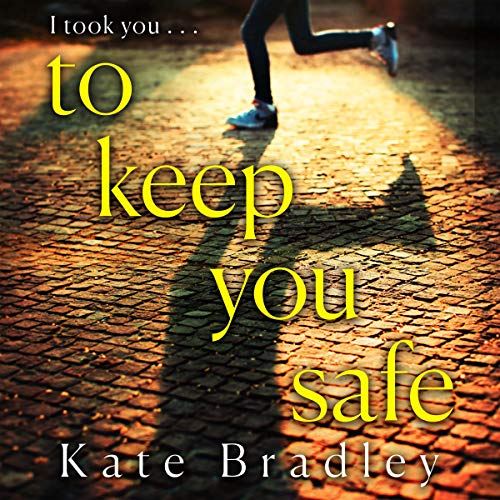 To Keep You Safe

By: Kate Bradley
Narrated by: Lucy Dixon
Try for £0.00

For fans of Clare Mackintosh and B. A. Paris comes a thrilling new voice in suspense writing.

With social services and the police not taking the threat seriously, Jenni does the only thing she can think of to keep Destiny safe: she takes her.

But the men that are after Destiny are close behind them. What can Destiny know that would make them hunt her? And can Jenni keep her safe?

But what if what Jenni thought she saw isn't the truth at all? What if the truth is much darker than either of them want to face? Their journey will take them both to unexpected places, but both are survivors and each will surprise the other in ways they could never have imagined.

What listeners say about To Keep You Safe

I loved this book, well crafted, easy to follow but not predictable. Loved the characters, believable and alarming. Highly recommend. 5 stars

Addictive, never wanted it to end!

I loved listening to this book, the characters were so well written and gave you great incites into their worlds.

never wanted this to end!

Back it goes! Not wasting a credit!

I found this book quite strange! a female teacher has concerns over a pupil who is involved with some dodgy men! The girl is under social services but the teacher - who was in the army prior to being a teacher...thought I would mention that because it was referred to constantly in the book takes it upon herself and gets all involved with the girls situation?? the next minute the teacher is driving the girl to her aunts house (a really long drive away), buying the girl new clothes, fast food and then saying she wanted to pay for the girls financial upbringing!!?? Hmmmm there are names for people like her and she should not have been working at a school. Also at the beginning of the book, although she taught the girl in her class, the teacher didnt know the girl existed, then a few chapters later all of the above unfolds! the story didnt flow at all and the characaters were not at all likeable! it made me feel uneasy as it came across to me like the teacher had other motives, it was strange! very strange and random! I did not want to know how it all ended! there were random chapters where someone else seemed to be telling a totally different story, I had no clue who he was or what he was talking about! it probably would have become clear but by this point I couldn't listen to anymore! The narrator kept stopping, I had to keep checking that my phone was working as it sounded like it was cutting off.

Totally Bizarre and belongs under a different genre!!