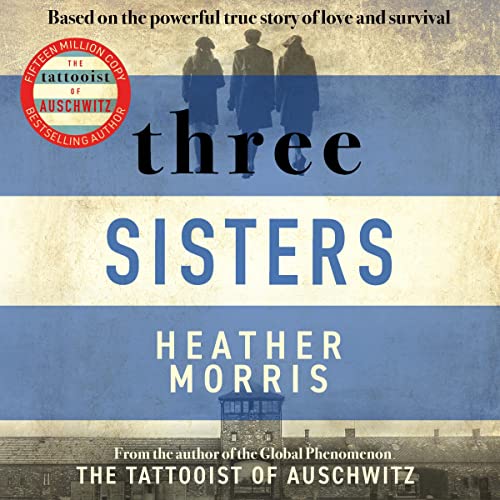 By: Heather Morris
Narrated by: Finty Williams
Try for £0.00

Based on the incredible true story of the Meller sisters, as told to Heather Morris. Including exclusive material from interviews with Livia Ravek and her family.

Their story will break your heart.

Their journey will fill you with hope.

You will never forget their names.

When they are little girls, Cibi, Magda and Livia make a promise to their father - that they will stay together, no matter what. Years later, at just 15, Livia is ordered to Auschwitz by the Nazis. Cibi, only 19 herself, remembers their promise and follows Livia, determined to protect her sister, or die with her. Together, they fight to survive through unimaginable cruelty and hardship.

Magda, only 17, stays with her mother and grandfather, hiding out in a neighbour's attic or in the forest when the Nazi militia come to round up friends, neighbours and family. She escapes for a time, but eventually she too is captured and transported to the death camp.

In Auschwitz-Birkenau the three sisters are reunited and remembering their father, they make a new promise, this time to each other: That they will survive.

Three Sisters is a beautiful story of hope in the hardest of times and of finding love after loss. Two of the sisters are alive in Israel today, surrounded by friends and family. They have chosen Heather Morris to tell their story in Three Sisters.

What listeners say about Three Sisters

Could not carry on. Narration sickly sweet. Did not like this at all so unfinished.

This is a wonderfully written account of how three sisters survived the horrors of Auschwitz Birkenau.
Deeply moving and, ultimately, uplifting.

Great 3rd installment of these books. If you liked the other two, this one is written in the same style which is easy to listen to. This book in particular has less information about what actually happened in the camp, but is interesting to hear what happened after they left. If you've read all 3 books, it's really interesting to see how different all of their journeys are.

For a person who is very interested in this genre this was one of the best audiobooks so far. Did read the tattooist a long time ago and really liked it. Three sisters is different but still a very interesting story to listen to.

Very well written and read, therefore a good listen for a non native English person like me 😊

after reading Tattooist of Auschwitz I was expecting equally strong storyline, but it felt quite predictable and way stretched out especially last 2 hours. this is more like biographical rather than novel. I skipped last hour to the end.

Heather Morris has once again captured the perfect balance between abject horror and the triumph over adversity. I simply couldn't put the book or the audio down.

Not only is this an important story to be told, it's also a very well written, sad, Inspirational and affirming story.

A Story That Needs To Be Retold

A fantastic story that needs to be told. This kind of deed happens far too often and it is so good to know that after all of the heartache The Three Sisters managed to come through all of the awful things that happened to them.

The narrator was irritating which unfortunately had a big impact on the story. I skipped the end, her sickly voice was to much!

This incredible story was so powerful that it made me cry. Ive read all the books that has come from survivors, and I will say this is the second best with much details about their life before, in and after Auschwitz, and the strong will of three young girls!

An amazing book of courage and love.
livvy narrator voice came across as petulant and made her sound too young.