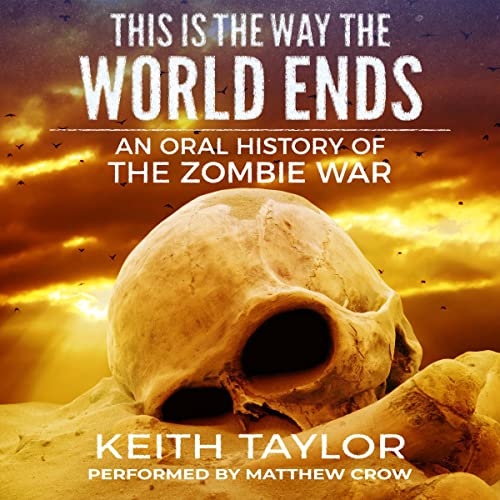 This Is the Way the World Ends

By: Keith Taylor
Narrated by: Matthew Crow
Try for £0.00

For thousands of years the virus lay dormant, trapped beneath the Siberian permafrost. Then we decided to dig in the wrong place.

FEBRUARY, 2031: The global population stands at just 400 million, and the scattered survivors bear the scars of our decade-long struggle to defeat an enemy few once believed could exist. Some nations have emerged from the war stronger than ever. Others hang by a thread. Some no longer exist at all.

In the aftermath of the zombie pandemic Keith Taylor, noted pre-war author of post-apocalyptic fiction, traveled the world to interview survivors from every walk of life, culture and stratum of society, ranging from American political leaders to Scottish oil rig workers, from Mongolian miners to members of India's homeless underclass, each with their own tale of survival against an enemy that feels no remorse, fatigue, fear or mercy; only insatiable hunger.

These chilling eyewitness accounts chart the course of humanity's most brutal war. They lead us from the emergence of the virus in the Siberian wilderness to the visceral, horrifying Shibuya footage, through the panic and chaos of the evacuations to the disastrous consequences of the UN's sweeping refugee amendment. They end with us battered and broken, diminished but not defeated, in the fragile peace we now enjoy.

Together these interviews represent the most illuminating and complete commentary to date of humanity's loss.

From these candid accounts emerges an image of early 21st century civilization as it truly was: imperfect, divided and wholly unprepared for a disaster on such a scale. This Is the Way the World Ends: an Oral History of the Zombie War takes an unflinching, uncompromising look at the world we had and lost; a look at the pain we suffered due to our inability to accept a single, simple truth:

What listeners say about This Is the Way the World Ends

A decent alternative to World War Z. The different chapters reflect different character's experience of the zombie virus and the quality of each tale differs wildly. Some bits are thrilling and some are a bit dull. Still, a very good listen overall. The narration is good except for the inconsistency in attempting accents. Clearly they didn't think they would get away with an Irish accent so just don't bother trying it, but they do try a Scottish one which is okay, but the regional English accent is just comical to anyone from the UK. The word "boodget" (budget) just took me out of the story completely.

I'm halfway through but I have to say I love this book, world war z left me craving more stories told that way amd this book delivers and then some

I really enjoyed this. It’s not like all the other run of the mill zombie books. It’s more of a documentary. Very well written. The narration was spot on from Matthew crow as always. He always delivers. I would recommend this book

This was amazing so unusual what a take on the genre. I really got into the stories and it just kept developing and getting better. The narration was sublime - honestly you could not tell it was only Matthew narrating. It all flowed so well. I got so addicted I had to keep listening to it.

For fans of World War Z

An entertaining homage to WWZ and certainly worth listening to if you're a Max Brooks fan. The use of "interviews" to tell a story lends itself so very well to the zombie apocalypse genre and Keith Taylor nails it here. My two favorite interviews were chapters 16 and 19 but each story has merit due to the near tangibility the characters evoke.

Matthew Crow's narration is crystal clear with no noticeable dips in quality. His character voices generally have subtle accents rather than stereotypical over reaching you find with some narrators. Overall he's very easy to understand and delivers the prose well.

for all the people comparing this to world War Z, they seem to have missed the point that the author himself says at the beginning that this story is an homage to world War Z and dedicates it to Max Brooks.

that being said, this is an excellent homage to the way world War Z was written but they completely different take on the virus as well as how humanity handles it.

the story is good and the characters are well written. Matthew Crow's narration is excellent as always.

This was such a great audiobook. I’ve listened to maybe hundreds of zombie books for the last 15 years and most of them are just not great for one reason or another. This THIS BOOK WAS AWESOME. i would love love love hearing more in a continuous series or a whole new one. I loved this book so so much. Thank you.

A great story with compelling characters. As the author states, this is a wonderful tribute to the book WWZ

This is a very unique way of telling a 'Zombie' story, by using interviews of survivors. It gave a different voice to the survivors and the victims alike.
I listened to the audiobook version of this book and Matthew Crow is one of the best narrators out there. His voice, the timber, is one I really enjoy listening to, but his ability to tell the story in the narration and then become the different characters is amazing. I never get tired of listening to his narrations.

I love a good zombie book

I received a free copy of this audiobook and I have to say that it was very interesting and a different take on how the world ends. I have listened to several books by this author and I like them all. I am a sucker for an end of the world book so I can be prepared when the shit goes down-when that happens I will have the author to thank along with many others. I know I am not the best reviewer but I did enjoy this book and look forward to listening to more by the author. The narration was great as usual.

This has been by far one of the best zombie stories ever told. An accounting of what happened is all you ever need.

Not your average zombie novel

This is not your average zombie novel. This is a approach I have never read before but it was great! Give it a listen! I received a free copy and left my honest review

As a former diehard lover of all things Zombie the market has become a bit saturated.

I bought this because Matthew Crow is an amazing Storyteller!

This book is different!

If you like anything at all to do with The Zeds listen to this book!!!

The author calls this an homage to World War Z in the foreword. That is an apt description. It has some fresh takes on various aspects of the zombie apocalypse, which is cool. The format is much like WWZ: author interviews with people around the world.

The narrator is not great at accents. He didn't do a good job shifting between characters and narration. That would've been hard for anyone, though. The audio book would have benefitted from an ensemble cast like WWZ. The thing that really bothered me about the narration is how often he mispronounced words. It's fine to not know how to pronounce "Oaxaca, Mexico," but if your job is to narrate an audio book with that chapter title, you should look it up. It wasn't just proper nouns, either. Editors need to do a better job of catching and fixing mispronunciations before release.

The book is well done and is a great tribute to Max Brooks’ WWZ. I bought the audiobook because I loved the physical book so much. The narrator is articulate and enthusiastic, his accents are almost non-existent. He sounds like an American male at all times. His female voices don’t sound female at all. The voices from characters in the UK sound nothing like that, one sounds like he could have been from the UK as a child and immigrated to the US young but that’s as close as he gets; the character from an oil rig off the coast of Shetlands, the narrator doesn’t even try to sound anything but American besides throwing in a couple of UK colloquialisms. Don’t even get me started on the characters from the rest of the world… horrid. You can however tell the different characters apart. The story itself carries the whole thing.