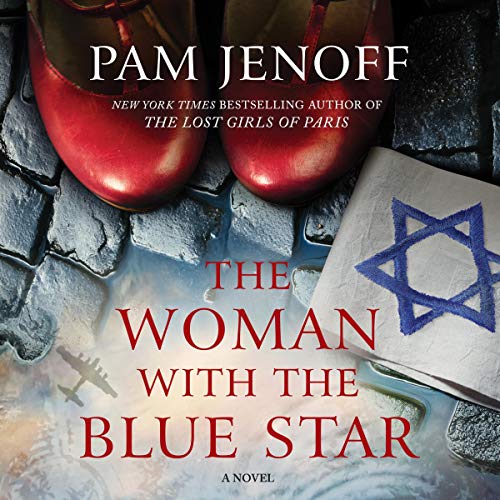 The Woman with the Blue Star

From the author of The Lost Girls of Paris comes a riveting tale of courage and unlikely friendship during World War II - now a New York Times best seller!

1942. Sadie Gault is 18 and living with her parents in the Kraków Ghetto during World War II. When the Nazis liquidate the ghetto, Sadie and her pregnant mother are forced to seek refuge in the perilous tunnels beneath the city. One day Sadie looks up through a grate and sees a girl about her own age buying flowers.

Ella Stepanek is an affluent Polish girl living a life of relative ease with her stepmother, who has developed close alliances with the occupying Germans. While on an errand in the market, she catches a glimpse of something moving beneath a grate in the street. Upon closer inspection, she realizes it’s a girl hiding.

Ella begins to aid Sadie and the two become close, but as the dangers of the war worsen, their lives are set on a collision course that will test them in the face of overwhelming odds. Inspired by incredible true stories, The Woman with the Blue Star is an unforgettable testament to the power of friendship and the extraordinary strength of the human will to survive.

What listeners say about The Woman with the Blue Star

I’ve listened to several stories written by this author and I’ve never disappointed with any of them so far. The narrator was engaging as was the storyline. Would certainly recommend this as a great listen with excellent storyline of courage and determination although sad in parts it high light man’s in humanity to man! Can’t wait to listen to the next story by this author!

Sadly based on real events

The research must have been painstaking. This story breaks in a few places - but I loved it! The ending - nice twist.. And sadly hopeful.
I'll keep this story in my mind for a long time

The Woman with the Blue Star

I have read & listened to many books written in relation to the persecution of Jews during WWII and I was particularly interested in the content of this novel which centred on the families living in the sewers to escape capture. The story plot was good and kept me interested until the end. I did however almost give up half way through due to the whining and continual angry narration for the character of Sadie. The narrators voice was very grating and took my concentration away from the storyline. I did not consider the narrators voice was truly representing a Jewish woman trapped in such appalling circumstances. I appreciate this is fiction but it presents a false picture of the appalling horrors the character would have experienced. I did finish the book and I am glad I did as I do not like to abandon authors because of the choice of narrator - otherwise I recommend the novel. Ann in Hertfordshire

I like this author
but the story was too long and very slow. The ending did have a good twist.

A Story of Love, Friendship and Courage

This was a truly touching book about friendship, courage and the strength of the human spirit. Truly beautiful! My father and his parents were in hiding during the Holocaust and I have heard many a story from him. It is, therefore, incumbent on me to address a review written by Emily, who suggested that the conversations between Ella and Sadie were ridiculous. You must understand that the humans can only withstand so much devastation. When one is living in squalor; dealing with starvation and under constant threat of death; sometimes one needs to forget one's dire circumstances for a moment and talk about "normal" life. After all, it is that sort of optimism that often can get us through such tragedies. I encourage Emily to do some more reading about the Holocaust. As she does, she will find that even those who were imprisoned, beaten, starved and tortured in the camps were able to find joy and humor and even the desire for intimacy. The comment Emily made was ignorant and insensitive. I encourage everyone to read this book and disregard Emily's review.

The book was amazing and I would highly recommend it. It is one of those stories that reinforces one's faith in humanity. I give it 5 stars!

I really enjoyed listening to this book. It was about ordinary people just trying to survive. It showed both sides of the struggle for people under the Nazis. Friendship could you get you killed in an instant but some people couldn't look the other way. Even though this is a fiction I could believe this probably happened many times in many places. A beautiful story that was beautifully narrated.

If you were hiding in a sewer during a war, wouldn’t you want to know news about the Allies or how things were going? Not the main character— no, she and her friend talked about their boyfriends. The conversations were trite and ridiculous. I really wanted to like this book, but I struggled to finish it.

I enjoy Pam Jenoff's books and have read most of them. while this story was interesting, Sadie's voice was overly melodramatic. I found it hard to listen to her voice and almost gave up. and bought the physical book instead.
The story itself was good but it was hard to get past the narration to judge the book fairly.

I have read a lot of Holocaust fiction and this is one of the best that I have read. The narration was great.

What a whiney, overly dramatic performance!!! The story was written for spoiled teenage girls. I would not recommend this to anyone. After just a few chapters, I will move on.

This book kept me on the edge of my seat from the beginning. Even my husband became interested while he caught bits and pieces while I was listening.

A new story of survival... in the sewers. The most brave hero’s and survivors of a most atrocious war.

Enjoyed the book very much: it kept my interest all the way through! Loved going back in forth between the 2 girls and the suspense and surprise ending!

The woman with the Blue Star is a 5 ⭐️ listen!

I was immediately engaged in the story & enjoyed non stop listening throughout! I pre ordered the audible book & Pam Jenoff did not disappoint!
I highly recommend this book based in part on a true story taking place during WW ll. The epilogue explains how the characters survived & lived after the war. Fans of WW ll will love this audible book!