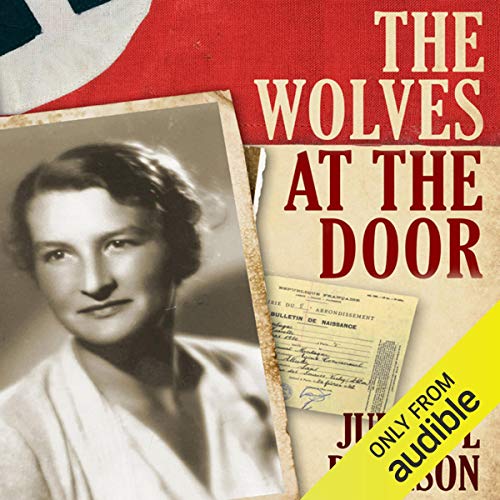 The Wolves at the Door

By: Judith Pearson
Narrated by: Patrice O’Neill
Try for £0.00

The remarkable story of one of WWII's greatest spies.

Virginia Hall left her comfortable Baltimore roots in 1931 to follow a dream of becoming a Foreign Service Officer.

After watching Hitler roll over Poland and France, she enlisted to work for the British Special Operations Executive (SOE), a secret espionage and sabotage organization. She was soon deployed to occupied France where, if captured, imprisonment and torture at the hands of the Gestapo was all but assured. Against such an ominous backdrop, Hall managed to locate drop zones for money and weapons, helped escaped POWs and downed Allied airmen flee to England, and secured safe houses for agents. And she did it all on one leg: Virginia Hall had lost her left leg before the war in a hunting accident.

Soon, wanted posters appeared throughout France, offering a reward for her capture. By winter of 1942, Hall had to flee France via the only route possible: A hike on foot through the frozen Pyrnes Mountains into neutral Spain. Upon her return to England, the American espionage organization, the Office of Special Services, recruited her and sent her back to France disguised as an old peasant woman. While there, she was responsible for killing 150 German soldiers and capturing 500 others. Sabotaging communications and transportation links and directing resistance activities, her work helped change the course of the war. This is the true story of Virginia Hall.

What listeners say about The Wolves at the Door

This is a remarkable story of a most extraordinary woman, however the tone, emphasis and overall performance of the narrator would suggest we’re listening to ‘Little Ginny’s Day Out With The Pixies’ and even then a toddler would feel patronised.

The narrator is ruining the book for me

What disappointed you about The Wolves at the Door?

I think the story may be interesting but the narrator is SO BAD that I can not listen to it. She sounds like she is reading Nancy Drew to 10 year-olds. It is so overy dramatic I am expecting her to say "OK childeren, can you say Nazi". I am barely into the first chapter of what may be a good book but I can not get past this narrator's inflection.

Has The Wolves at the Door turned you off from other books in this genre?

No, but I will make sure I never read anything with this narrator

I am disappointed that I can't finish the book and insulted that the reading is so condescending.

This is a thrilling narrative. At least, I think it is. I found the narration to be too matter of fact or light or something. It would be perfect for Jane Austen; it did not work for true spies and nazi atrocities. Plus, much of the story takes place in France, so having the French names mispronounced was incredibly distracting. Surely that is something the narrators could be better prepared for by the producers?

This is a wonderful biography about Virginia Hall, an unsung WWII spy.
What courage she possessed!

Her story should be required reading for all Americans.

I cannot lie that I am very impressed with the woman this biography centers on. She overcomes extreme personal challenges of a physical nature and exemplifies heroism. The book provides enough historical background to make the story relevant with even just a basic understanding of the second world war. That said, I have a better than working knowledge of WWII and there were many interesting points that I was personally unaware of.

It is unbelievable to me that this lady is not known by more as a true world war II hero. Her life story truly is epic and should be told on the silver screen.

This was an amazing review of WWII history for me. I enjoyed the story very much. The narration, however, was wrong for the tone of the narrative. This narrator would be better suited for narrating juvenile fiction.

Reader was hard to understand at times. But the story was wonderful. Perhaps if a man had read the book it would have work to the stories advantage.

The Wolves at the Door pays tribute

Judith Pearson does a excellent job of telling the story of Virginia Hall a true unsung hero of the 2nd World War . The narration of this book was very good and I listened to this book in 2 days. when you learn the many difficulties she had to overcome with 1 leg and all she accomplished its most amazing a must read.

The audio was almost embarrassing to listen to. A childish voice slowly voicing the words. After 3 chapters I couldn't take it another minute. I'll read the book...sometime.

The narrator will make you want to die

I’ve tried listening to this four times now. Every time I get about 2 minutes in until I break my head phones. It’s like sitting in on a 3rd grade teacher reading The Chronicles of Narnia to her class. Every word that has an “S” in it comes across as a snake hissing.