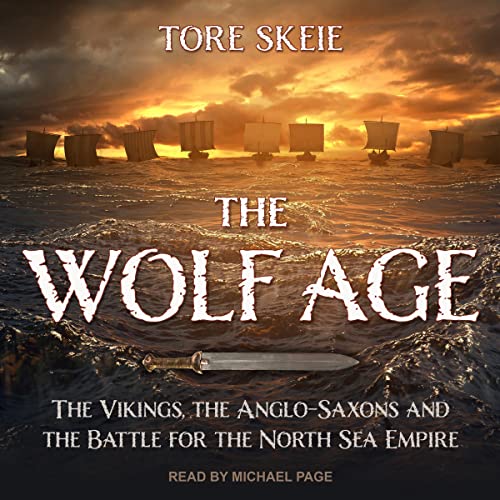 By: Tore Skeie
Narrated by: Michael Page
Try for £0.00

The first major book on Vikings by a Scandinavian author to be published in English reframes the struggle for a North Sea empire and puts listeners in the mindset of Vikings, providing new insight into their goals, values, and what they chose to live and die for.

The Wolf Age takes listeners on a thrilling journey through the bloody shared history of England and Scandinavia, and on across early medieval Europe, from the wild Norwegian fjords to the wealthy cities of Muslim Andalusia.

Warfare, plotting, backstabbing, and bribery abound as Tore Skeie skillfully weaves sagas and skaldic poetry with breathless dramatization as he entertainingly brings the world of the Vikings and Anglo-Saxons to vivid life.

In the eleventh century, the rulers of the lands surrounding the North Sea are all hungry for power. To get power they need soldiers, to get soldiers they need silver, and to get silver there is no better way than war and plunder.

This vicious cycle draws all the lands of the North into a brutal struggle for supremacy and survival that will shatter kingdoms and forge an empire . . .

What listeners say about The Wolf Age

I loved the book, but the narrator destroyed every namn and place. As an Swede I would appreciate that if you are going to narrate something that has Scandinavian names in it, Do alittle research about pronunciation. Almost every Scandinavian name was miss pronounced...

I loved this book with its Scandinavian perspective, which for an English national, reorientates your understanding of the history we usually view from our nations' borders. Yes, there are names, dates, geography and other histories to get your head around but so worthwhile to get your head around. Essential reading and listening I would say if you love this period. Overall ? Excellent!
Narration? The narrator does an excellent job; most of my listening is done at a slower speed to make sure I catch the details, and as always when you switch from book to book you have to "tune you ear in" and by the end I was very comfortable with the narrator.

I bought the hard back copy of this book unsure of the correct pronunciation of the Norse words I purchased the audiobook.
Ok the Norse words may be correctly pronounced but my goodness the delivery is like an automated voice - I actually checked that it was a human reading it. It was. It makes Alexa seem almost human.
Flat monotonous voice, which does nothing for the densely packed facts.
Reminded me of the worst history teachers I ever had who somehow managed to make the subject dry and boring.

I gave the performance one star as it was good for my insomnia.

Interesting account of the invasions of England by Scandinavians around 1000.
Would have been helpful if there was a .pdf of maps and list of the players.

This is not story telling or history staring or insight provision. This is a list of dense facts into a book with no relief. May be for you, wasn’t for me.