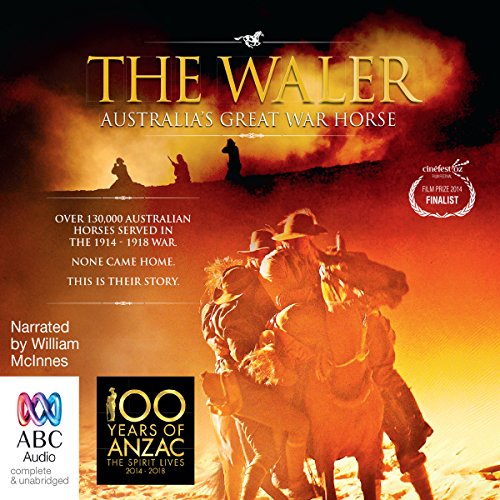 By: uncredited
Narrated by: William McInnes,full cast
Try for £0.00

When the first convoys of the ANZAC Expeditionary Forces sailed from Albany’s majestic King George Sound in November and December 1914, they carried with them hundreds of horses. Many had been loaded in ports elsewhere in Australia and New Zealand. Some came from unexpected places, including Juna Downs, a vast pastoral station in Western Australia’s remote Pilbara region.

This is the extraordinary story of Australia’s war horses - where they came from, where they served, and what became of those that had survived when Great War hostilities ceased in 1918.

What listeners say about The Waler

Not the story of the breed.

The title is misleading, this book is not about an amazing breed of horse now lost to us, but a general history of the Australian campaign in WWI. A depressing listen, not sure if I'm keeping it.

For any horse or history lover

Heartfelt and sorrowful. Truly a forgotten part of history. Animals did and do so much for us, but we do not repay them in kind. This story reminds me of the K-9's left behind in Vietnam, not a proud moment in military history. For the love of horses, thank you.