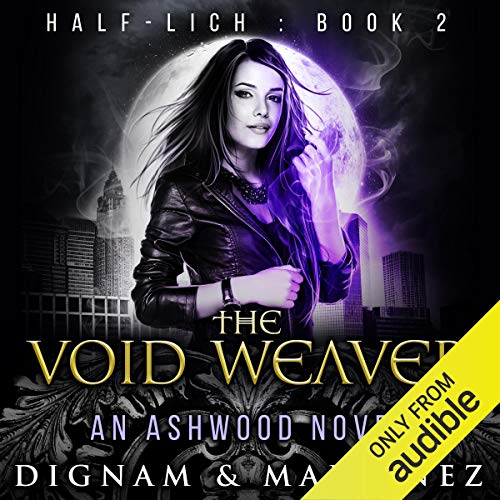 By: Lee Dignam,Katerina Martinez
Narrated by: Laurel Schroeder
Try for £0.00

Alice has lost her powers and her nemesis is getting stronger, but it's hunt or be hunted.

Alice is in hiding. Holed up in a magically-protected house without her main weapon, the supernatural bounty hunter wants nothing more than to hunt Nyx down before she becomes prey herself. But her enemy is in hiding too, and if Alice is to find her she'll have to get past the dangerous Pain Children first. When Alice learns that Isaac Moreau remains in Magistrate custody, she has no choice but to follow Nyx's trail without backup and without her powers. Her only chance at defeating Nyx may lie in Isaac's attempt to learn the dark, deadly secret of the Void, but his failure could get them all killed in the process. The Void Weaver is the second book in the Half-Lich series, a set of Urban Fantasy Paranormal Thrillers. If you like intriguing characters, supernatural monsters, and sizzling chemistry, then you'll love Dignam and Martinez' next thrilling installment that draws comparisons to Ella Summers, Ilona Andrews, and Patricia Briggs!

What listeners say about The Void Weaver

Book 1 I finished in a weekend and book 2 was a little over 5 days. The only reason it took so long was because I had to work. I found myself listen in the car, cleaning the house, and every where I had time. Love the plot twists and turns. There also a love story in the series who know.

I like the book. I listened to it on audible.

Interesting story line. The only thing is that I might have liked it even more if I had realized that it was the second book. It might have made a bit more sense if I had started with the first one.