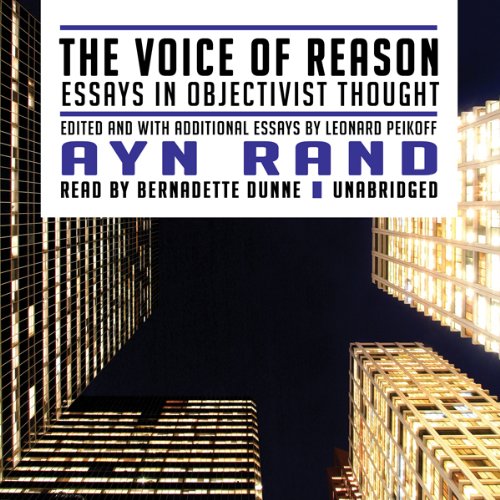 The Voice of Reason

By: Ayn Rand,Leonard Peikoff
Narrated by: Bernadette Dunne
Try for £0.00

In the years between her first public lecture in 1961 and her last in 1981, Ayn Rand spoke and wrote about topics as different as education, medicine, Vietnam, and the death of Marilyn Monroe. In The Voice of Reason, these pieces are gathered together in book form for the first time. Written in the last decades of Rand's life, they reflect a life lived on principle, a probing mind, and a passionate intensity. With them are five essays by Leonard Peikoff, Rand's longtime associate and literary executor. The work concludes with Peikoff's epilogue, "My Thirty Years with Ayn Rand: An Intellectual Memoir," which answers the question "What was Ayn Rand really like?" Important reading for all thinking individuals, this collection communicates not only Rand's singular worldview, but also the penetrating cultural and political analysis to which it gives rise.
©1989 the Estate of Ayn Rand and Leonard Peikoff (P)2008 Blackstone Audio, Inc.
Philosophy Political Science
Show More Show Less

What listeners say about The Voice of Reason

Nice long series of increasingly complex
explorations of her thoughts and theories, a great introduction.

Explains Everything Of Today

Amazing collection of her best work, read in a manner that ensured comprehension. I found myself nodding over and over as her predictions of outcome were manifested in today's news. Please give this book to your children. If I'd had it at 15 years of age my life would have been so much easier. The narrator was perfect. If you have struggled to understand Rand in written form, these Audible offerings will be your remedy as they were mine.

Where has this been all my life?

This woman was really sharp. I had never heard of Leonard Peikoff before so I was pleasantly impressed. While it's a lot to digest, it is prescient. (I will review it again as needed & envision a paper copy w/ tabs and marks in my library)
Funny, I had just finished the Communist Manifesto (again 😣). I struggled with Marx when I was young so went back into it and realized now in my 50s that it really was just a bunch of gobbledygook. My goodnes.

These essays are excellent and interesting. This should be listened to by anyone interested in learning and ideas.

This was an enjoyable and insight-laden compilation, and I found the essays by Rand and Peikoff with respect to concepts and concept formation particularly orienting and relevant today; I also benefited from the many evaluations and narrations of the concrete consequences of such abstractions in day-to-day affairs and institutions.

Yet most striking to me was the penultimate chapter, chapter 31, ‘Libertarianism, the Perversion of Liberty”, by Peter Schwartz. Schwartz brings up the interesting and true point that we can only be good or evil if we can choose, and that morality, therefore, depends on freedom.

From this observation that liberty, irrespective of any subsequent good or evil, is required for good, Schwartz —and here he did not make sense to me— vituperatively lambasts —in my estimation, misrepresents and libels— libertarianism as adhering to a ‘litany of irrationalities’, ’rejecting all values’ as ‘logically leading to nihilism’. He writes that ‘nothing matters to libertarians, not even the value of life itself… they [libertarians] want to be free to act without purpose reason, to achieve nothing in particular’, seeking ‘freedom from the demands of existence’. ‘Libertarians reject anything that tells them that there is something that they should not do, that there is something that will not yield to their emotions -that there is something; reality itself is the limitation they ultimately resent, it is from the universe as such that libertarians wish to be liberated.’

This book was a great read for people interested in the fundamental ideas that Rand promoted, and for those interested in freedom and morality generally. Chapter 31, however, was either sorrily out of place in this book, or a crucially important chapter whose point I failed to comprehend. I’ll read it again in a few months, and in the interim will read other defenses and elaborations on this pretty inflammatory chapter —perhaps I’ll come to see that Schwartz, in what seemed initially like rambling nonsense and misconstrued ideas, made a very useful critical point. ...The judge and jury will reconvene on this in future.

perfect to finish her legacy

great articles and letters to complete any collection of ayn rnads work. two thumbs up

Loved to hear words of reality, thanks you. The only thing I don’t like is that I can’t meet Ayn Rand :(

If you are familiar with objectivist literature, there is some repetition here, but many new things as well, and most of it is really good. Very good material for a person who would like to have happiness on earth.

If you are new to Ayn Rand, this will give you some insight in some of her perspectives.

Was good till the end when Miss Rand contradicted herself, Liberty, and attacked Murray Rothbard.