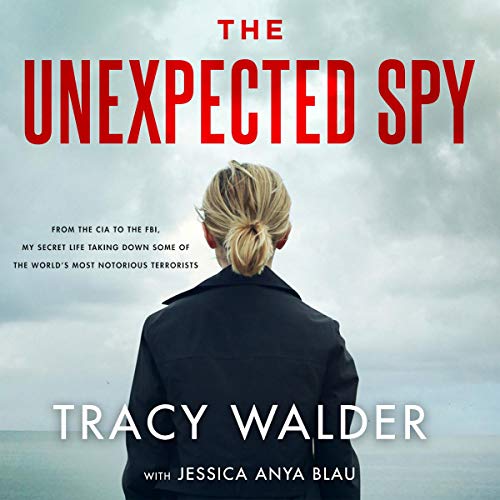 A highly entertaining account of a young woman who went straight from her college sorority to the CIA, where she hunted terrorists and WMDs

When Tracy Walder enrolled at the University of Southern California, she never thought that one day she would offer her pink beanbag chair in the Delta Gamma house to a CIA recruiter, or that she’d fly to the Middle East under an alias identity.

The Unexpected Spy is the riveting story of Walder's tenure in the CIA and, later, the FBI. In high-security, steel-walled rooms in Virginia, Walder watched al-Qaeda members with drones as President Bush looked over her shoulder and CIA Director George Tenet brought her donuts. She tracked chemical terrorists and searched the world for weapons of mass destruction. She created a chemical terror chart that someone in the White House altered to convey information she did not have or believe, leading to the Iraq invasion. Driven to stop terrorism, Walder debriefed terrorists - men who swore they’d never speak to a woman - until they gave her leads. She followed trails through North Africa, Europe, and the Middle East, shutting down multiple chemical attacks.

Then Walder moved to the FBI, where she worked in counterintelligence. In a single year, she helped take down one of the most notorious foreign spies ever caught on American soil. Catching the bad guys wasn’t a problem in the FBI, but rampant sexism was. Walder left the FBI to teach young women, encouraging them to find a place in the FBI, CIA, State Department or the Senate - and thus change the world.

"The Unexpected Spy will get wide attention, and deserves it. It will give readers a different, more vivid, and more human idea of the actual work of spying, counter-intelligence, and dealing with terrorism. It will be especially important to young women who are considering this kind of career." (James Fallows at The Atlantic, author of Blind into Baghdad)

"A well-written, engaging memoir, a serious and candid inside view of two enigmatic and significant institutions from a woman's perspective." (Booklist)

"Tracy Walder's The Unexpected Spy is an engaging and thoughtful story of service that will inspire generations of young women to come. Tracy's story is particularly moving because it provides a candid but often untold account of the challenges of serving one's nation amid tumultuous times. As a woman in national security, Tracy offers a glimpse into the rewards and risks of actualizing a dream in a male-dominated space." (Lauren Bean Buitta, founder, Girl Security)

What listeners say about The Unexpected Spy

This book is fantastic!! Written really well and is genuine really interesting.
Only thing slightly annoying is the sections that are redacted. But this is not the authors fault it is just operational security.

some parts of the book was interesting, lots of sections about the lady who wrote the book and her feelings on colleagues etc. not much about the war on terror.

Pretty frustrating- just omit all the redactions for Pete’s sake - didn’t anyone listen to this before release?

I was pleased to hear the Author loves this country and wanted to protect it. I wish I wasn’t surprised at how much the author used her gender to claim victimhood everywhere. I am glad she had a daughter because too many boys have been emasculated by victim mothers.
Also wanted Buch tried for Treason? Really the President hanged? Wow. The FBI was described as a bunch of egomaniacal clowns . Not surprised. Wish I was. I won’t get those 8 hours back but at least It was documented most FBI and a lot of the CIA are POS’s.

way to much redacted . If i wanted to read redacted stuff i would order the 9/11 files.

Kind of a disappointment

I went back and forth about getting this book and I'm sorry to say it disappointed me. If it wasn't for all the this, that, and the other being redacted by the CIA all the time, I think it would have been much better. Those "redacted" statements (constantly) really messed with the flow of the book. I found myself getting distracted by them and missing what was said for the next several sentences.
I was hoping for a lot more from this book.

I feel this was too much redacted interrupted parts which was annoying to listen to. Also too liberal for me.

Never made it past chapter 1. I just got tired of hearing “section redacted by cia” Detracting at best. Poor writing at worse

The redactions are a little distracting at first, but easy to get over.

Huge disappointment! A caricature of a serious story that turns on a feckless feminist perspective that is an utter waste of time.

The time frame of her experiences is around 9/11/01. It really brought back a lot of memories of that period of time, and the following many years. A new CIA analyst during this period of time was obviously so challenging. Tracy is clearly a strong, dedicated and intelligent woman. I was really impressed with her insight and knowledge.
I was a bit disappointed by the level of anger & accusations against the Bush admin. I had hoped it wouldn’t get “political “, but it did. She has a good amount of bitterness about what happened to her work as it was passed on.
I am extremely disappointed & was at times frustrated with “Redacted CIA review “. There is a lot of it. It leaves the impression that the review is not done and some redactions may disappear? No answers available for that question that I could find.
Overall it was well written, the narrator did well. I would like to revisit if the CIA allows Tracy to “use her words”.

LOVE TO SEE IT

Timely, one-of-kind journey alongside the compelling life of a brilliant, rugged, and inspired American who just happens to be a woman, and a DG to boot.