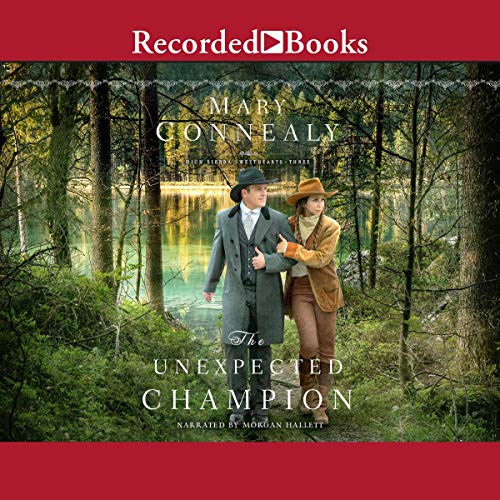 By: Mary Connealy
Narrated by: Morgan Hallett
Try for £0.00

City-dweller John McCall never expected to be out in the High Sierras of 1868 on a wild-goose chase to find the Chiltons' supposedly lost grandson. But now that he's out here, things have gotten even more complicated, mostly due to wildcat Penny Scott. She's not like any woman he's ever met - comfortable in the woods, with a horse, and with a gun.

When Penny and John are taken against their will by a shadowy figure looking for evidence they don't have, both realize they've stumbled into something dangerous and complicated. With their friends and family desperately searching for them, Penny and John must make a daring escape.

When they emerge back into the real world, they are confronted with a kidnapper who just won't stop. They must bring a powerful, ruthless man to justice, even as this city man and country woman fight a very inconvenient attraction to each other.

What listeners say about The Unexpected Champion

Author's books are always well written and I see the story unfold as if I was in the middle of the story.

Great conclusion to the series, yet it is a book which can also stand alone.

I was thrilled to find a third book in this series. This there was a fourth. #1 and 3 are my favs

Getting to know more of Penny’s story was delightful. The duo of John & Penny was well-matched and pushed each other to be better. I loved watching them learn to work together and respect each other’s talents and strengths.

The themes of justice, revenge, and mercy continue through this book. Many lingering questions from the series are answered while a few more are posed. It’s a good wrap up without completely killing the story.

I was did not like this book as much as the others , it started out ok but the drama of having to get married in that circumstance was not believable , it was to farfetched .

What a tale! Never a dull moment. Disguises, escapes, secrets, mystery. It's all in one story.

I love this book

I absolutely loved this book !!! It’s a really good series and I hope there is more coming with Adam and Utah in it 💙💙.