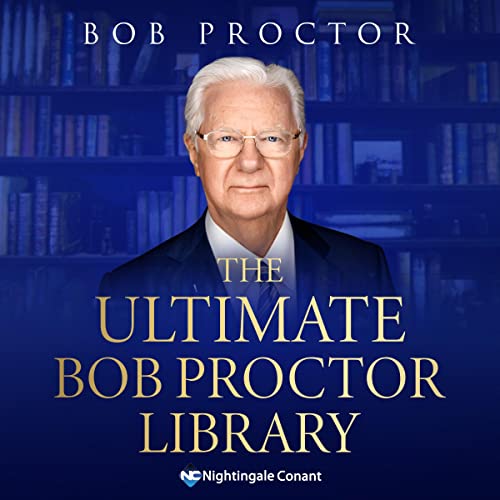 This is The Ultimate Bob Proctor Library with legendary personal development philosopher, speaker, and teacher, Mr. Bob Proctor. We welcome you to this unique collection of great ideas in sound from a truly inspirational human being, a world-renowned expert on the mind, human potential, and success— whom I was also proud to call a friend and mentor. Bob Proctor, who passed away in February of 2022, packed more accomplishments and transformed more lives in his 87 years than most people ever contemplate.

It’s certainly not the life that Bob thought was even possible during his childhood years growing up in Ontario, Canada. Bob routinely shared with his audiences how he was a child with a poor self-image and little ambition. Bob dropped out of high school, had a great deal of difficulty finding a job, and had no clear plans for his future. Then, at age 26, he was handed the book Think and Grow Rich by Napoleon Hill. It’s a book he would read repeatedly, and the spark of wisdom that Bob credits will alter the trajectory of his life and lead him on his own quest for the “secrets of success.”

It was then that Bob’s lifelong connection to Nightingale-Conant was established—as Bob’s quest led him to Earl Nightingale, the famed “Dean of Personal Development,” who soon became Bob’s colleague and mentor. Proctor moved to Chicago, where the time he spent with Nightingale yielded him much inspiration and shaped him to be a better person in general. His coaching changed his life forever and made him greatly prosperous. He climbed ranks quickly at the Nightingale-Conant, working directly with Earl Nightingale and his co-founder Lloyd Conant, and soon Bob became Vice President of Sales.

As Bob was inspired by the work at Nightingale, which was all about teaching personal growth and development, Proctor got the idea that he should open up his own seminar company to deliver motivational lectures on self-help to others. So from then on, Bob Proctor has been making efforts to get people to recognize their inner selves and then excel at what they wish to do. His company brought in many students from the US and Canada, who soon started to climb up in their lives.

Ultimately, Bob then met his future business partner, Sandy Gallagher, a very successful attorney, at one of his three-day seminars. Those days transformed her life, and eventually, she joined forces with Bob to create the Proctor-Gallagher Institute.

Bob Proctor worked with business entities and individuals worldwide as a speaker, author, consultant, coach, and mentor. He instilled the mental foundations of success, the motivation to achieve, and the actionable strategies that empower people to grow, improve, and thrive in this ever-changing world. And in the process, Bob left behind his wisdom in scores of recorded seminars, audio programs, and books.

What listeners say about The Ultimate Bob Proctor Library

Simply put, this is the only audio anyone could possibly require to obtain the required inspiration / realisation / awareness in whatever field you are seeking the wisdom. Each time you listen, not just to hear but to understand and apply...then your life will become amore fulfilling place!

If I was to offer one piece of advice before listening, is to go into each listening with an intention

Bob at his best

There is nothing like this out there. Business and spirituality. if you ain't got both then that's why you are struggling.

Loved everything about this. Listening over and over to change how I think and feel

The man has worked it out. He knows the secret. He also knows how to teach it.
You HAVE to listen to this book.

My only issue, and it is MY issue, is that it's live and you have to deal with the 'laugh out loud' paople and even 'whoopers.' You can tell his audience is American and drunk.

The sound is terrible

Unfortunately, this in particular is awful. The recording has damaged the content of the audio and I am very disappointed. I really would love to return this audiobook

Worth every minute of your time. It gives you lots of good things to think about.

This is one of the best books ever. Bob Proctor is amazing. He changed my life. Highly recommend.

THANKING GOD AND THE UNIVERSE FOR BOB PROCTOR

I AM ANTHONY L PARKER. I WOULD LIKE TO THANK GOD AND THE UNIVERSE FOR BOB PROCTOR! 🙏😇🙏 HE IS, AND WILL ALWAYS BE ONE OF MY MOST CHERISHED MENTORS!!! MR. PROCTOR HAD, AND WILL ALWAYS HAVE "THRUOUT ETERNITY" THE MOST POWERFUL GIFT OF MAKING DIFFICULT TO UNDERSTAND AND EXPLAIN SUBJECTS, SEEM SIMPLE!!! I PRE-ORDERED THIS BOOK AND WAS EXTREMELY EXCITED WHEN I OPENED MY AUDIBLE.COM APP THIS MORNING TO SEE BOB'S PRECIOUS GIFT READY TO BE UNWRAPPED AND DOWNLOADED. 😁👌 THANK YOU TO THE NIGHTINGALE CONANT FOUNDATION, BOB'S BEAUTIFUL WIFE LINDA, AND HIS FAMILY, FOR MAKING THIS BOOK "ALONG WITH HIS FUTURE PUBLICATIONS" POSSIBLE!!! THANKS AGAIN. ANTHONY L PARKER 😎👍ENJOY MY FRIENDS!!! [ LOOKING FORWARD TO "THE SECRET SCIENCE OF GETTING RICH" BY BOB PROCTOR ON JUNE 21 2022 ] MAY HIS SPIRIT LIVE ON FOREVER THRU ALL OF US!!! 😇👍

Top 5 all time. A must for every library.

I have listened to or read hundreds of books on the subject. Bob has provided what I have been missing. Wow!

Get this book it will change your life. well put together Bob Proctor Simplify age old wisdom so we can apply to our every day life. Thanks Mr. Proctor for all you did.

The late Bob Proctor gives the listener classic principles of Financial Success in this audio compilation. Things that have been proven in previous Eras to work for him and thousands of others. Some of his teachings might clash with the Beliefs of The Christian Conservative, but nevertheless, most of his teachings are in alignment with Biblical Scriptures. A good compilation of teachings on financial Success that have worked for Generations and might actually be timeless!

What do you want from life!

I listen everyday and I enjoy the self motivation this brings me. I only wish I had learned about him earlier in life. My favorite chapter is,
What do you really want!

Great content for personal development, Bob get us wanting to hear more and more and to come back many times over, to capture nee information each time.

Sound is not the best

I found it very similar, almost repetitive, to what there is in Change your paradigm, change your life. The sound was not the best either.

I would highly recommend listening to this book. Anyone, no matter where they are at in their life could benefit from the information here. I will continue to reference this book as a permanent guidance for success in all aspects of my life.

We are so lucky to be able to listen to Bob Proctor after his passing. Changed my moms life, and look forward to applying this knowledge to my own life.
Listen to this!!
Your dream life is waiting for you, go get it!