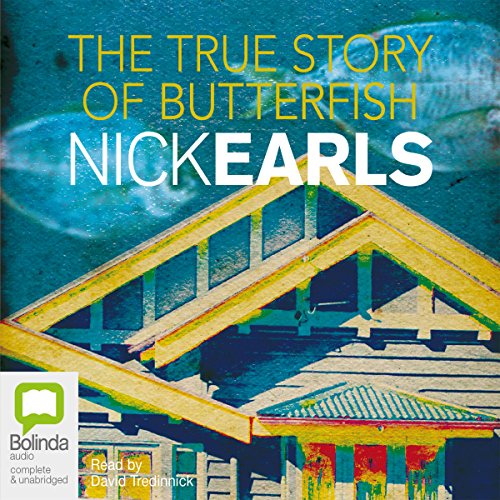 The True Story of Butterfish

By: Nick Earls
Narrated by: David Tredinnick
Try for £0.00

Former rock star Curtis Holland moves to an Australian suburb to escape fame; however, he can't quite find the quiet life he seeks. Nick Earls presents a simple but absorbing storyline with no real climax. The well-depicted characters, nevertheless, carry this work. David Tredinnick's performance is pitch-perfect. His relaxed, contemplative voice suits the tone while he easily handles the complex characters and their quirks. Listeners will particularly enjoy hearing an uncommon audiobook set outside of the U.S. or the U.K.

When Annaliese Winter walks down Curtis Holland's front path, he's ill-prepared for a 16-year-old schoolgirl who's a confounding mixture of adult and child. After years travelling the world with his band, Butterfish, he's not used to having a neighbour at all. So when Curtis receives an invitation to dinner from Annaliese's mother, Kate, he is surprised when he not only accepts but finds himself being drawn to this remarkably unremarkable family.

He's drawn even to 15-year-old Mark, who is at war with his own surging adolescence. Curtis soon realises that with Kate divorced, Annaliese and Mark need a male role model in their lives, but it's hard for him to help when he's just starting to grow up himself - and harder still when Annaliese begins to show an interest in him that is less than filial. Filled with acute observation, humour, and tenderness, Butterfish is Nick Earls at his very best.

"It is a tender, funny tale of a man finally coming to terms with adulthood that is touching without ever being saccharine." ( The Daily Telegraph)

What listeners say about The True Story of Butterfish

Nick Earls specialises in story telling about characters who are complex, believable and loveable in spite of - or perhaps because of - their flaws. Like Jane Austen, Earls is able to take ordinary events and everyday exchanges, and convert them into an extraordinary and engaging tale. Like all his books, this one left me feeling warmly amused, affectionately joyful, and hopeful... I can't put it into words. It's gold.

The True Story of Butterfish is about Curtis Holland, a mid-30s guy who has returned home to settle in the suburbs of Brisbane after living for a few years with international fame and touring in a rock band called Butterfish. Curtis is reconnecting with real life: a suburban house, his family, and real people, particularly the two teenagers and their single mum next door.

Tredinnick does a great job reading. He uses a moderately broad Australian accent that works just fine with the story. His vocal representation of the characters is brilliant; he does a better job than my own imagination when I read the paper-book! His performance enhances the listener's experience and allows us to soak up the images evoked by Earls' choice of words and ride the amusing story to its satisfying end.

It's a shame that (as I write this review) there aren't more of Nick Earls' books available on Audible.

Having just come off a jag of science, history and 'serious' fiction listens, this book seemed like a pleasant interlude. And it was. The over-the-hill rocker protaganist is likable and endearing as he assesses the mess he has made of his life and relationships. The dialog is smart, true-to-life, and slightly humorous without being over the top. I think many readers will view the characters in the book with affection and recognition--of themselves, their teenage kids, out-of-touch friends, and former spouses. None of them are perfect, but all are decent people trying to make the best of the places they have landed in their lives. If you liked Ron McClarty's "Memory of Running" (an Audible original), I think you will like Butterfish as well. It has much the same feel -- an ending that is neither story-book nor heroic, but in the direction of affirmation and second-chances. I liked it enough that I am going to check out other titles by this author.

Laconic Australian story of the effects of fame

Would you listen to The True Story of Butterfish again? Why?

I love Nick Earls.His writing style is easy going and accessible. I listened to this withmy15 year old daughter and we both really enjoyed it. Yeah, we'd listen to it again.

What was one of the most memorable moments of The True Story of Butterfish?

Which character – as performed by David Tredinnick – was your favorite?