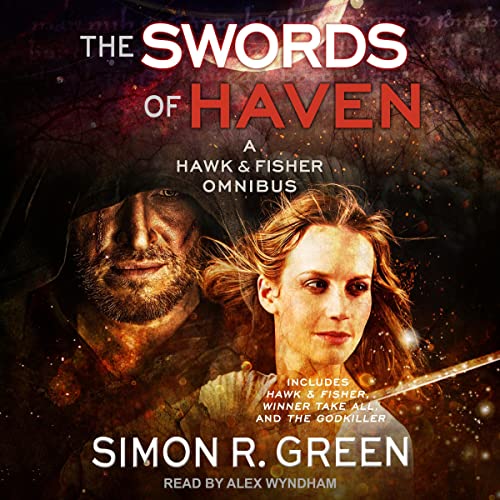 The Swords of Haven

A high-level city official is murdered during a dinner party and Hawk and Fisher have only a few hours to find the killer among the guests, including powerful spell-casters, cunning politicians, Haven royalty, and the victim's own wife.

Hawk & Fisher grapple with dark magics, devious politicians, and deadly assassins when they're assigned to protect James Adamant, a fiery young politician whose plan to root out Haven's corruption makes him very popular . . . as a target.

No one is safe in Haven, not even the Gods! When divine residents of the Street of Gods fall prey to a murderer, Hawk & Fisher must team up with an exclusive tactical unit to catch the killer before all hell breaks loose in Haven.

What listeners say about The Swords of Haven

Maybe better to read not listen?

I normally enjoy Simon R Green writing and have listened to a number of audiobooks written by him, however I just couldn't get into this one. The thing that really tripped me up was the cadence of the performer. I couldn't get past the weird drawl on the last word of most sentences. The story wasn't interesting enough for me to push past that annoyance.

I love the Fisher and Hawk characters and have read print copies ages ago. This version dire not disappoint. Slipping back into Haven and having their company for my commute was a pleasure. Definitely get this if you're already a fan. It would be a great introduction if you're new to Haven as well.

Tough cops on a tough beat.