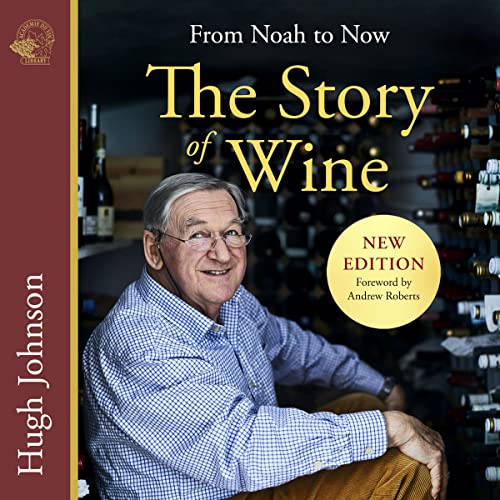 The Story of Wine

By: Hugh Johnson
Narrated by: Simon De Deney
Try for £0.00

When first published in 1989, The Story of Wine won every wine award in the UK, and the USA. It is widely regarded as Hugh Johnson’s most ambitious and enthralling book. Writing it, according to Hugh, was like trying to get "a quart into a liqueur glass". It is not just one story but a collection of many, scanning the wine world from Noah to Napa, from Pompeii to Pomerol, as illuminating to our understanding of civilization as it is to our appreciation of wine.

Chronicling the making, merchandising, and drinking of wine through millennia, this new edition is fully updated to include Johnson’s view of the evolution of wine over the past 30 years. As historian Andrew Roberts says in his foreword: “The genius of The Story of Wine derives from the fact that it is an adventure story, full of mysteries, art, and culture."

What listeners say about The Story of Wine

I listened to this for hours, mesmerized at how self-regarding the narration was, and never quite believing it. But it really is a spectacle. A voice actor so obsessed with a false cadence that the sense and enjoyment of Hugh’s prose is buried utterly.

i was drawn to this book

by hugh johnson's world of trees it is the best simon please make it audible u did good.