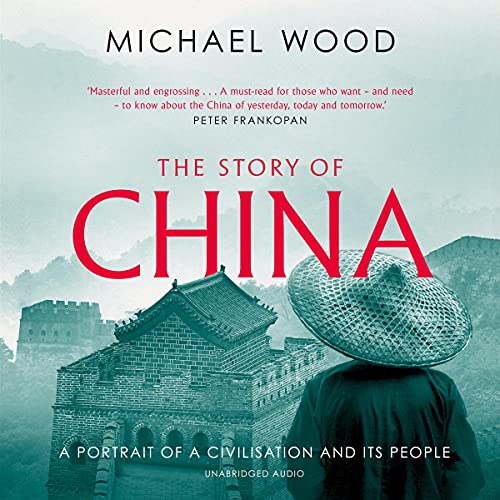 The Story of China

China’s story is extraordinarily rich and dramatic. Now Michael Wood, one of the UK's pre-eminent historians, brings it all together in a major new one-volume history of China that is essential listening for anyone who wants to understand its burgeoning role in our world today.

China is the oldest living civilisation on earth, but its history is still surprisingly little known in the wider world. Michael Wood's sparkling narrative, which mingles the grand sweep with local and personal stories, woven together with the author’s own travel journals, is an enthralling account of China’s 4000-year-old tradition, taking in life stationed on the Great Wall or inside the Forbidden City. The story is enriched with the latest archaeological and documentary discoveries, correspondence and court cases going back to the Qin and Han dynasties, family letters from soldiers in the real-life Terracotta Army, stories from Silk Road merchants and Buddhist travellers, along with memoirs and diaries of emperors, poets and peasants.

In the modern era, the book is full of new insights, with the electrifying manifestos of the feminist revolutionaries Qiu Jin and He Zhen, extraordinary eye-witness accounts of the Japanese invasion, the Great Famine and the Cultural Revolution under Chairman Mao, and fascinating newly published sources for the great turning points in China’s modern history, including the Tiananmen Square crisis of 1989, and the new order of President Xi Jinping.

A compelling portrait of a single civilisation over an immense period of time, the audiobook is full of intimate detail and colourful voices, taking us from the desolate Mongolian steppes to the ultra-modern world of Beijing, Shanghai and Hong Kong. It also asks what were the forces that have kept China together for so long? Why was China overtaken by the west after the 18th century? What lies behind China’s extraordinary rise today? The Story of China tells a thrilling story of intense drama, fabulous creativity and deep humanity; a portrait of a country that will be of the greatest importance to the world in the 21st century.

"A learned, wise, wonderfully written single volume history of a civilisation that I knew I should know more about." (Tom Holland)

"Masterful and engrossing...well-paced, eminently readable and well-timed. A must for those who want – and need – to know about the China of yesterday, today and tomorrow." (Peter Frankopan)

What listeners say about The Story of China

Ruined by the narrator

It’s a shame that a well researched book as this is , should be completely ruined by the narrator , we are treated to a succession of lip smacking and glottal swallowing that is nauseating , along with massive intake of breathe after every six or seven words . It’s difficult to find a competent narrator these days but it’s a mistake for an author unqualified in the art of narration to think that they are capable of doing the job. It’s a false economy to massage the ego in this way .

Maybe it’s his pace, maybe the excessive dramatisation he puts, or perhaps the great number of details and lack of a map to follow history of China and its details. I just couldn’t keep my attention and remember the details to move on with the history. Sometimes I felt there were gaps I just had missed and could not pick it up after. Maybe it’s just me, but I just couldn’t finish it.

Beautifully narrated, this gives a clear account of China's history, with tales of its leadership, its culture, and its extraordinary population of people, the character of whom can only spark admiration among Western readers. Highly recommended.

A slightly over enthusiastic narrator (great for TV, and no doubt for lectures, but somewhat tiring in an audiobook - it got better after the first too chapters). Contentswise excellent. Maybe we could have lived without some anachronisms about feminism and other thoroughly modern concepts being applied to premodern thinkers/poets, and focused on their views as they were in themselves rather than as baby steps towards liberal humanism. Then again this is popular history, and as quite good such. Extremely up to date and informative, it's a great summary of China's history, as well as a gateway drug for more specialized study. 5/5

I watched Michael Wood in a documentary years ago and found it to be excellent and this book is an amazing history of China, narrated very well and not any different to the professionalism I saw on the TV. Also, being a Kung Fu practitioner, I wanted to learn more about the history of the country that it came from. A great listen!

The book is not intended for a general audience. It is intensely detailed which I’m sure is interesting for experts in ancient history and archaeology, but I am not and it was hard to listen to. It didn’t really have takeaway insights for ordinary people to broaden their minds

I can't recommend this highly enough! For a book covering China from pre-history to summer 2020, there is a surprising amount of detail. Each chapter covers either a major dynasty or interregum and contains an overview narrative history accompanied by contemporary accounts of families caught up in the events or sketches of daily life.

I came to this with almost no knowledge of China's history or geography (although the basic layout of china is described, I would recommend having a map nearby) and learned a huge amount, but never felt overloaded with detail. In particular, I found the parallels to (or contrasts with) contemporaneous events in European history helped keep track of events.


The narration is delivered with enthusiasm and understanding of the material, although at times it seemed a little too fast.

I came into this with some trepidation but it was worth it!. Excellent allround work!

Michael Wood - reminds me why I love history