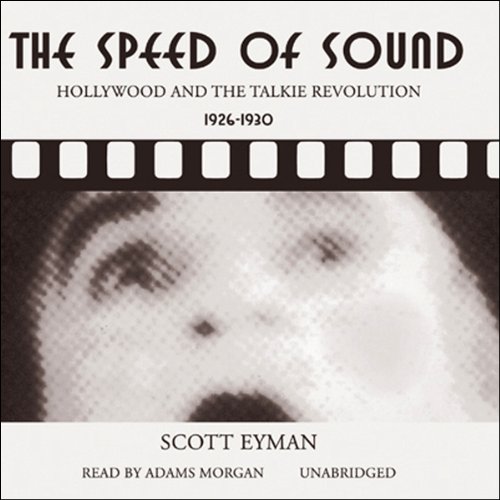 The Speed of Sound

By: Scott Eyman
Narrated by: Adams Morgan
Try for £0.00

It was the end of an era. It was a turbulent, colorful, and altogether remarkable period, four short years in which America's most popular industry reinvented itself.

Here is the epic story of the transition from silent films to talkies, that moment when movies were totally transformed and the American public cemented its love affair with Hollywood. As Scott Eyman demonstrates in his fascinating account of this exciting era, it was a time when fortunes, careers, and lives were made and lost, when the American film industry came fully into its own.

In this mixture of cultural and social history that is both scholarly and vastly entertaining, Eyman dispels the myths and gives us the missing chapter in the history of Hollywood, the ribbon of dreams by which America conquered the world.

"Eyman captures the tenor and the terror of the times....A fascinating account of what Eyman terms 'the destruction of one great art and the creation of another.'" ( Booklist)
"Eyman combines a historian's zeal for detail and context with a storyteller's talent for the perfect illustrative anecdote....A remarkable book that belongs in every film history collection." ( Library Journal)
"Eyman is particularly good at conveying the beauty of the fully developed art that was silent cinema....Eyman tells this story with wit and skill, detailing a surprisingly overlooked but crucial period in Hollywood history." - Kirkus Reviews

What listeners say about The Speed of Sound

What would have made The Speed of Sound better?

A slower speaker. this is a very interesting story but the narrative is so fast it is impossible to take the detail in.

Far too fast. May be OK for the American market but far too fast for the UK.

It's a great story but not for audible with that particular narrator.

Get an English narrator or an American that speaks more slowly. Remember that on audible we only have the voice to narrate the story!

This book was a fun read and with a total lack of any film history books available as audio book, it shines. Really enjoyed it and may listen to it again, where else can you here about the early days of Warner Brothers and the history of American Cinema. Great technical facts about early film processes, can't believe they used to sync records to films and thought that was a good idea!

If you enjoy the history of early cinema and Hollywood this is an essential pleasure. And, the narration is terrific.

If you like silent and early sound films (or are a general 1900s-1930s history buff) you'll enjoy this. It tells the story of how sound films were born, all the obstacles that had to be overcome, and the eventual triumph. It also busted some myths about this era, namely that countless actors were driven to ruin because of some oddity in their voice like a lisp or an accent.

My only gripe is that the author occasionally delves into critical analyses of some film that seems tangentially related to the story of sound pictures. Not a deal breaker; just kind of weird and seemingly off topic.

You'll learn a whole lot about silent as well as sound films, plus intriguing facts about pop culture, legendary stars and directors, and cinematic technique. The prose style informs and delights the reader, sprinkling in ironies and jokes here and there.

A great retelling of facts and stories of cinema’s painful bend from silent to sound. Told in a compelling narrative that keeps your attention to all the effort made to change the industry.

I could have wished Scott Eyman had delved even deeper, and make no mistake, this was already a deep dive.
I loved the technical stuff, the quotations, and the author's own mini critiques of the landmark movies mentioned.

I was just about to pre-order the audio-book version of Eyman's upcoming book on Cary Grant, but decided against it, as I fear he'll use Adams Morgan again as the narrator. In addition to a distractingly odd accent I can't exactly put my finger on, Morgan disappoints in two important issues: 1. Frequent mispronunciations. 2. A tendency to swallow the end of sentences.

The story was interesting and seemingly well-researched, but the overall feeling I am left with is quite negative and it can only be down to the narration.

What made the experience of listening to The Speed of Sound the most enjoyable?

I knew very little about early talkies when I began this book. All I knew was that Jolson's The Jazz Singer was the first talkie (and I was wrong about that). This book is full of well-researched details about the revolution that sound brought to film. Mr. Eyman's prose is precise and full of the kind interesting detail that comes from extensive research.

What other book might you compare The Speed of Sound to and why?

Most of Mr. Eyman's Hollywood books are similar in topic, extent of research, and curiousity about the film ndustry.

Have you listened to any of Adams Morgan’s other performances before? How does this one compare?

I do not recall this narrator reading any other books I have read. He has a beautiful voice and enunciates clearly. My only complaint is that he mispronounces some Hollywood names (SH-enk for SK-enk and Wang-ger for Wayne-jer). Unfortunately a lot of narrators of Hollywood books do this.

If Vocal Fry Is Your BAG...

There is no other subject that interests me more. This book was highly informative and exciting. The reader has heavy vocal fry which sounds to me like a cassette player on rewind heavy on the consonants and gravel. IF the person who cast this reader was trying to make a person feel the anxiety and annoyance of the first talkies audiences listening to the hiss pop of Vitaphone, they have succeeded. There is an ice pick in my kitchen. I have thought of stabbing my own ears while rewinding the performance over and over trying to understand certain words. NO air. NO vowels. I wonder if the reader was once a growling dog turned into a fancy human being by a frightened wizard?

Facinating look at an overlooked period in film

Fascinating look into a period of film that is all-too-often ignored. Eyman really brings the world to life with lots of memorable characters and anecdotes.

The narration is great, too.