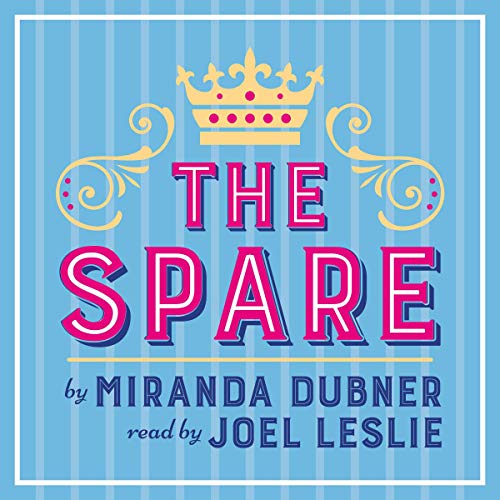 By: Miranda Dubner
Narrated by: Joel L. Froomkin
Try for £0.00

""I'm publicly bisexual now, I'll make all the musical theatre references I please. I'll belt Cole Porter songs prancing on top of this bar if I want to." (His Royal Highness Prince Edward Nicholas William Desmond, second son of Her Majesty Queen Victoria II of England and the Commonwealth)

Eddie Kensington had certain responsibilities, up until two weeks ago. Dress well, smile in public, uphold the family honor. Be straight. Never talk about being bisexual, or being in love with his bodyguard, Isaac Cole, for nearly 10 years. Protecting his mother and siblings from yet more tabloid scandal in the wake of his parents' high-profile divorce was always more important.

Up until two weeks ago, when he was outed by the press. Now he's in the midst of an unscheduled identity crisis, and his entire family seems to be joining in. His estranged father shows up. His sister flirts with the reporter hired to write their grandmother's biography. His older brother is more reluctant than ever to take up public-facing duties, and Her Majesty is considering going out on a date. Keeping calm and carrying on becomes impossible when Eddie learns Isaac might return his decidedly inconvenient feelings.

For any one of them to steal a happily ever after, the Kensingtons will have to decide what they really hold dear--the legacy they were born into, or the dreams they kept for themselves.

What listeners say about The Spare

Enjoyed this alternative to real life royal scandals, from the family’s POV looking out. Multiple storylines which gelled well, with the narrator doing his usual exceptional job with different accents. First time I realised the wonderful Joel Leslie works under another name.

Bodyguard story lines are a favourite of mine, although I was disappointed when the second half of the book kept the MCs apart. Lots of angst within the family, reconciliations, disposal of baddies and characters pairing off. Detailed back stories and in-depth soul searching conversations, amongst everyone else, left very short ending for our MCs, which makes this a 4 rather than 5 star for me overall. Throw away comments about their past relationship were buried in other character conversations, which I would have preferred to hear from them or built into their backstories instead of hinted at elsewhere.

Overall a promising start with great story line that seemed to somehow leave the MCs behind in favour of other family members telling their story. In fact very little conversation or uninterrupted interaction between the MCs throughout. An epilogue dedicated to them at least would have made up for this perhaps.

I have read thousands of books similar to this but have never wrote any review until now. The is a fabulous book. Made all the better by Joel Leslie and his amazing narration that brings every character to life.

This book is good. Some of the storylines are completed, others are not. Five stars for Isaac and Edward’s story. Five stars for Arthur’s story. One star for Alex’s unfinished story. One star for Victoria’s unfinished story.
The author tried to flesh out the auxiliary characters too much. One becomes very involved with them and it is jarring that they don’t get their HEA.

The writing was solid with well-considered characters, realistic social observations, and an interesting premise.

The plot was self-indulgent, veering off into perspectives and underdeveloped, random side romances that only distracted from the main characters. More so, those forays into irrelevant vignettes never went anywhere, making their inclusion make even less sense. The over-attention to details about clothing and hair probably could fill a whole two hours of this book.

The reason I gave the story three stars is that while there was a happily ever after, the author's straining to tie everything up neatly with a bow resulted in Edward, the prince we're all reading for, having a secret wedding out of the public eye, and he's whisked off with his love on an immediate honeymoon, meaning he's not even out at his (straight) brother's wedding. So the whole point of the book - Edward coming publicly into his identity - feels like another step back into the closet. Even with the promises of a public announcement, doing Isaac and Edward's wedding behind closed doors seems like just more of the image-pandering and shame that the royal family was learning to break free of.

I very much enjoyed Miranda Dubner's writing style, and the story was great. I loved all the characters and the glimpse into what royal life might be like.

What I did not care for were the myriad POVs. I enjoy the dual POV that many romances have, and I enjoy single POV. It gets confusing when you throw in more than two, and this book had at least six, and possibly seven POVs. This is where the editing should have happened. I cared that each character had a HEA, or a HFN, but I'd have enjoyed all the stories more if this massive 14 hour audiobook had been broken into smaller books so that each story could have been the focus, and fleshed out more. I understand why that might have been challenging, given one major plot twist, but even with Joel Leslie's almost miraculous gift of individualizing every character with unique voices, accents, and personalities, I still got confused as to whose POV was the focus of a chapter.

It's a lovely story, with lots of fun dialogue and humor, but it could have been amazing with a bit more story planning and a few more shorter books. I'd still recommend listening!

I loved this book it was well written and pulled you in so many directions that you are never sure if it will end the way you want.

I adored this novel so much, and can't wait to read other books by Miranda. Joel, per usual, does a splendid job on the narration.

A beautiful book just got better

I absolutely adore this book. I’ve read it at least a dozen times. But the audio book, narrated by the fantastic Joel Leslie makes it just stupendous.

The story, so relevant in today’s world, and yet there is a deep historical feeling that kept my interest and curiosity on a kind of edge that I don’t always feel while reading. This is almost a current historical fiction. Fascinating.

This is the first audiobook I've ever listened to and I loved it. Joel Froomkin did a fantastic job with the narration. I felt every burden, every regret, every wistful thoughts carried by the characters in this novel and shed my fair share of tears along the way.

The story is full of anguish and drama. More a story where everyone took their path to a reckoning to finally choose what they want in life than a romance. But the love was at the core of every decision, every thought that passed through the book.

Yes, there were two many side stories that perhaps overshadowed Eddie's and Isaac's story more than necessary. But I still loved hearing about them. One thing I couldn't get over was it sometimes felt like a self pity party of everyone involved including the royals and Isaac. Still, I loved the story and loved the narration. 100% recommend.

What a lovely little romp through a royal romance with a properly Shakespearean ending. So sweet. So fun. Like candy to my ears.