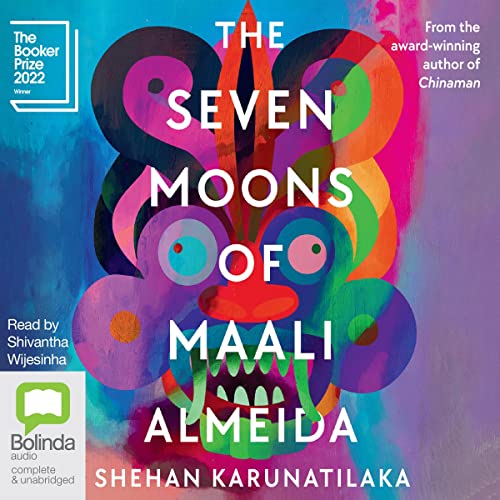 The Seven Moons of Maali Almeida

By: Shehan Karunatilaka
Narrated by: Shivantha Wijesinha
Try for £0.00

Colombo, 1990. Maali Almeida, war photographer, gambler and closet queen, has woken up dead in what seems like a celestial visa office. His dismembered body is sinking in the Beira Lake and he has no idea who killed him. At a time when scores are settled by death squads, suicide bombers and hired goons, the list of suspects is depressingly long, as the ghouls and ghosts who cluster around him can attest.

But even in the afterlife, time is running out for Maali. He has seven moons to try and contact the man and woman he loves most and lead them to a hidden cache of photos that will rock Sri Lanka.

"Karunatilaka has a real lightness of touch." (The Observer)

"Celebrate the arrival of the Great Sri Lankan Novel." (The Times)

… 'What the judges particularly admired and enjoyed in The Seven Moons of Maali Almeida was the ambition of its scope, and the hilarious audacity of its narrative techniques.

'This is a metaphysical thriller, an afterlife noir that dissolves the boundaries not just of different genres, but of life and death, body and spirit, east and west. It is an entirely serious philosophical romp that takes the reader to ’the world’s dark heart’ - the murderous horrors of civil war Sri Lanka. And once there, the reader also discovers the tenderness and beauty, the love and loyalty, and the pursuit of an ideal that justify every human life.’ - Neil MacGregor, Chair of the 2022 judges.
Explore the Booker Prize
The shortlist, longlist and winners from previous years.

What listeners say about The Seven Moons of Maali Almeida

Hard work. Not my thing at all

Sadly this book did nothing for me. The kind of book where you reread a paragraph 7 times and still neither know what happened in it, or care. Lots of the words are in Sri Lankan which I don’t speak, so much of the meaning is lost, the history is poorly illustrated so you find yourself making assumptions about what the book is talking about. I love reading. I did not enjoy reading this.

I really enjoyed it and didn’t want it to end … gutted !!! Very different from my usual reads and took me on a truly immersive journey. The narrator was the right fit and brought the book to life .

An engrossing story developing like the MA photographs as the storyline enfolds. Metaphysical and grounding

It’s unusual to find a completely unique story but ‘Seven Moons’ is just that. It was superb in every way.

Like majority of booker prize winners, it’s a great book to listen, finished it in 2 weeks!

So many layers woven together into a rich tapestry.
Beautifully narrated.
Didn’t want it to end.

I felt sad each time I had to stop listening. Best choice if a first time listener. I will follow this author. I loved the voice of the narrator.

I’ve never read anything quite like this. It took a chapter or two to get used to the style but I loved it! Unflinching in detail and feeling. I found the narrator to be masterful of the many voices and a pleasure to listen to. Wonderful book.

Loved this book. Such juicy intertwined characters and plots. I didn’t want it to end

This novel slowly unfolds and enchants you with its sumptuous imagery, intriguing characters and storytelling. Complex, rich and brilliant!

Moving but not easy to listen to

An exceptional combination of harrowing history, otherworldly images dark humor and a murder mystery. Something like a cross between The Sympathizer and Lincoln in the Bardo. Highly recommended.