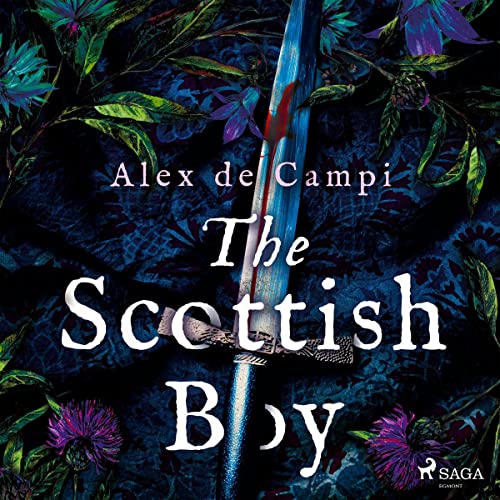 By: Alex de Campi
Narrated by: Richard Pearce
Try for £0.00

1333. Edward III is at war with Scotland. Nineteen-year-old Sir Harry de Lyon yearns to prove himself and jumps at the chance when a powerful English baron, William Montagu, invites him on a secret mission with a dozen elite knights.

They ride north, to a crumbling Scottish keep, capturing a feral, half-starved boy within and putting the other inhabitants to the sword.

But nobody knows why the flower of English knighthood snuck over the border to capture a savage, dirty teenage boy. Montagu gives the boy to Harry as his squire, with only two rules: don't let him escape, and convert him to the English cause.

At first, it's hopeless. The Scottish boy is surly and violent and eats anything that isn't nailed down. Then Harry begins to notice things: that, as well as Gaelic, the boy speaks flawless French, with an accent much different from Harry's Norman one. That he can read Latin too. And when Harry finally convinces the boy – Iain mac Maíl Coluim – to cut his filthy curtain of hair, the face revealed is the most beautiful thing Harry has ever seen.

With Iain as his squire, Harry wins tournament after tournament and becomes a favourite of the King. But underneath the pageantry smoulder twin secrets: Harry and Iain's growing passion for each other, and Iain's mysterious heritage. As England hurtles towards war once again, these secrets will destroy everything Harry holds dear.

Alex de Campi is a thriller writer with an extensive backlist of critically-acclaimed prose and graphic novels including Eisner-nominated heist noir Bad Girls (Simon & Schuster). Her most recent books were pulp horror graphic novel Dracula, Motherf**ker (Image Comics), sci-fi thriller Madi: Once Upon A Time in the Future co-written with Duncan Jones (Z2 Comics), and True War Stories, an anthology of soldiers’ deployment tales. She is on most social media as @alexdecampi.

What listeners say about The Scottish Boy

Loooved this! The performance is brilliant and really brings the story to life. Feels like a TikTok runaway success in the making!

There are no words to get the point across. It will make you laugh, cry, rip your heart out and then gently put it back in. I loved every second of it, and it will go down as the best book I’ve ever read.

I’ve got over 60 audiobooks under my belt in this app and I’ve left reviews for only a few. What an a absolute pleasant surprise. On the surface one might call this your “typical” MM romance (with the abundant and very descriptive sex scenes), however it was so much more. The story is phenomenal, steeped in history, the main characters very much well developed, and the pacing riveting. Now, I did notice some similarities to certain famous movies/tv shows that take place during the same time period, but it was mostly just amusing to listen to and fun to recall where I’ve heard certain things before. But as a whole, this is an absolutely refreshing and unique tale that quite honestly had me on the edge of my seat most nights. There were times when I thought certain scenes might veer towards cliche moments, only to leave me breathless when it went in a completely different direction!
The narration was excellent! Richard Pearce contorting his voice for all those characters made the immersion all the more complete. Bravo! 10/10 would recommend. Let’s get this story more reviews and downloads so we can get more like it!

Every character is fleshed out. The narrator is great. The story made me feel so full, then ripped my heart out, then ripped it out again, and then made me cry with happiness. Read it.

My first time with this author's work. The story was amazing and the narrator was absolutely perfect.

Great story, could barely stop listening. Richard Pearce is the best narrator I have listened to.

I loved everything about this audiobook. The story was so good and at times had me unable to stop listening and wondering what was going to happen. The narration was amazing. So glad I listened to it.

Took me a while to get used to his voice

It took me a while to get used to his voice. I didn’t mind the accent at all, just Harry’s voice. I got a little more used to it after the fifth or seventh chapter (thx god) and forgot all about my annoyances by the twentieth chapter so I guess alls well it ends wells

A refreshing story…would have been a great story without the explicit sexual descriptions. I want to know more about what happened next.

Spoilt by the present tense

That's it - it's spoilt by being in the present tense. It never ceases to be annoying.

Worth a dozen credits!

I listen to a LOT of audiobooks and rarely write a review. This is one of those books that stand out among the thousands I've listened to. It was so good I never wanted it to end! Use your credit now!!!