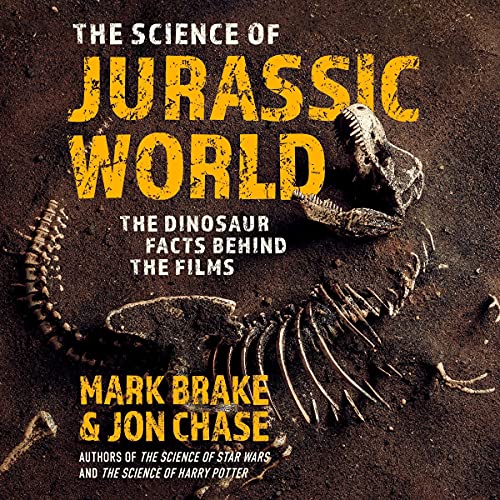 The Science of Jurassic World

By: Mark Brake,Jon Chase
Narrated by: David Doersch
Try for £0.00

A tale of some of the most amazing creatures ever to grace this tiny planet - unearth how the science fiction of the Jurassic World franchise inspired the evolution of dinosaur science.

It all began in 1993. Jurassic Park was a movie landmark in the development of computer-generated imagery and animatronic visual effects. Jurassic Park became the highest-grossing movie of that year, and the highest-grossing film ever at the time, a record held until the 1997 release of Titanic. The field of dinosaur science has blossomed by leaps and bounds and branched out in recent years, in no small part to this iconic movie series.

In The Science of Jurassic World, we experience the amazing story of the birth of the dinosaurs, how they evolved to world dominance, how some became gargantuan in size, how others grew wings and flew, and how the rest of them met an untimely end. Chapters include:

And so much more!

Discover how some of cinema’s most incredible creations do justice to the jaw-dropping evolution of these fantastic creatures.

What listeners say about The Science of Jurassic World

I enjoyed this but …

Palaeontology is such a big field, it worked really well to anchor the facts discussed to the Jurassic Park / World films.
However, much of the material seems to have been lifted from the excellent Rise and Fall of the Dinosaurs by Steve Brusatte. Notably the description of the Chicxulub impact and the anecdotal description of a pack of T. rex hunting.

I personally like mysteries and romances. with a little a little Sci Fi mixed in. But I finished a really great mystery and decided a little dinosaur facts would be good. Instead of listening to books I already have listened to (I've got Tyrannasaurus Sue in my Library), I decided to try a this book.

It was going along fine and then they started talking about what people used to believe in the old mostly religious times. Now, I know what they believed was based on silly ideas but they were honest in their opinions. The authors treated these people with disrespect and disdain. I thought we'd gone beyond this but it seems not. Then they started talking about other things.

Then they got to the part where they speculated on what President Trump would have done and said if he were dealing with the dinosaurs escaping into the world. I am a Republican. I am NOT a Trump supporter but they had a whole chapter on the Trump's handling of this crisis. It made me feel like they wrote this whole book just to make the President of the United State look like a buffoon! Let's talk about the current nonsense our President is letting happen in the middle east.

They had a some good opinons about what could/should have happened, if not for the two chapters that ruined the whole book. I usually only give a 3 to 5 stars review, I only gave the authors 1 star because I HAD to review this horrible book. I gave the reader a 4 star because he should not be zapped because he read the book perfectly.