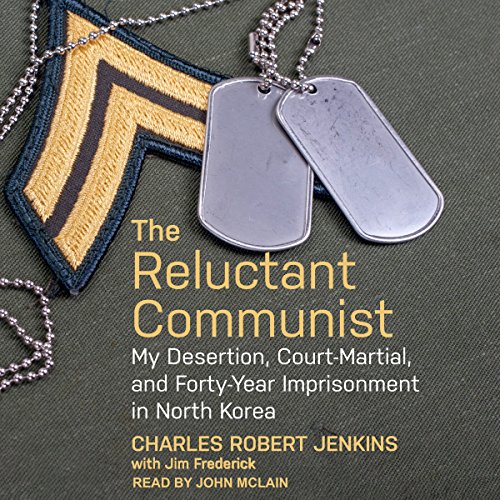 In January of 1965, 24-year-old US Army sergeant Charles Robert Jenkins abandoned his post in South Korea, walked across the DMZ, and surrendered to communist North Korean soldiers standing sentry along the world's most heavily militarized border. He believed his action would get him back to the States and a short jail sentence.

Instead he found himself in another sort of prison, where for 40 years he suffered under one of the most brutal and repressive regimes the world has known. This fast-paced, harrowing tale, told plainly and simply by Jenkins (with journalist Jim Frederick), takes the listener behind the North Korean curtain and reveals the inner workings of its isolated society while offering a powerful testament to the human spirit.

What listeners say about The Reluctant Communist

This is a great story but genuinely letdown by the narrator who constantly mispronounces 'Pyongyang'. Then there is the heavy accent which doesn't work effectively.
Redo the narration and this would be an amazing listen.

Been waiting ages for this to come out as an audio book. It was worth the wait.

I have read many books on North Korea, most of them very involving but this one is not. Not sure how the jurnalist author managed to make such a fascinating subject so boring.

A story of treason.

As an American I'm ashamed I spent money on this book. It's about a person who turned his back on America and has more excuses than Kim jong Un. I feel like vomiting.

Excellent historical perspective as well as a great human story. Super easy to stay engaged with this book. Great perspective on North Korea it’s relationship with the US, Japan and the world.

At first, I judged the author harshly for deserting his post, but now I see the human side of him.

The narration is so bad it’s distracting. Even if I speed it up, it becomes more comical but I still couldn’t listen to the story. This must have been an early recording before they realized that the voice matters. Check the sample, that isn’t just a comic stretch of bad reading. That’s the clowns voice.