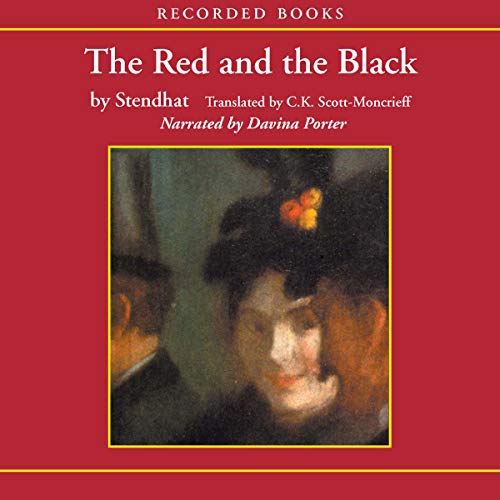 The Red and the Black

By: Stendhal
Narrated by: Davina Porter
Try for £0.00

Madame de Renal, a wealthy heiress who married the mayor of Verrieres, suddenly finds herself in love with handsome young Julien Sorel, her children's penniless but ambitious new tutor. After a lifetime of complying with all the social rules of French high society, the unassuming Madame de Renal has always regarded true love as the height of immorality, or the subject of fanciful novels. But after meeting the mysteriously charming Julien, both of their lives are transformed in unimaginable ways. Praised for its unflinching look at the hypocrisy of romantic conquests, Stendhal's The Red and the Black remains one of the 19th century's most affecting and passionate novels, and a major influence on modern fiction.
Public Domain (P)2011 Recorded Books
Classics Literary Fiction Historical Fiction
Show More Show Less

"Of all the instruments that have ever been used for sketching or writing, Stendhal's traces the most delicate line." (Andre Gide)

What listeners say about The Red and the Black

Stephen's review, while offering a general snipe at Stendhal, doesn't really give much information about this specific recording for those who may wish to know if it is a good audio version of the book or not.

I think Davina Porter is one of the best narrators I have ever heard- in an ideal world, every child would have a mother with a voice like this to read them bedtime stories. It may be a personal feeling, but you can check it out for yourself on the sample.

As for the text, it is also top drawer: I had to read the book in French for my degree, and I also read a Penguin edition when I wanted to reread it and was being lazy, and I bought this version for when I was being even lazier and wanted to 'read' the book while jogging etc. The point of this is that I concluded this translation was better than the Penguin one: it is more faithful to the original while at the same time being beautiful to read.

All in all, this version of this novel is a lovely experience and, in my opinion, twenty hours of your life well spent.

?...a psychosomatic illness that causes rapid heartbeat, dizziness, confusion and even hallucinations when an individual is exposed to art, usually when the art is particularly 'beautiful' or a large amount of art is in a single place. The term can also be used to describe a similar reaction to a surfeit of choice in other circumstances, e.g. when confronted with immense beauty in the natural world.?
Sorry to report that I didn?t suffer any of the above ? drooping eyelids, paucity of will to live, deadening of the buttocks?tempered with intermittent amusement.
Treat with a large dose of Zola followed by a course of Flaubert to be taken after Maupassant

In one sense, there's no denying this book is a masterpiece. It seems as though Stendhal set out to dazzle the reader with his incredible understanding of human nature, and that he did. However, looking back at the audiobook after a few weeks have passed, I find it difficult to remember the actual plot. So in that sense, I feel as though the novel could have been a better novel. Nevertheless, I would certainly recommend it for the sheer psychological depth. And, as audiobooks go, the narration on this one is top-notch.

As for the complaints about audio quality in some of the earlier comments: this has apparently been fixed, and the quality is perfectly acceptable.

I really wanted to listen to this book, but the audio quality was prohibitive...
I hope that audible will find a better recording at some point, as this is great book.

When I first purchased this book, I did not realize how poor I would find the sound quality...see my previous review.

However, now Audible.com has found a recording with the highest possible sound rating...a "4".
This is a vast improvement!

The Red and the Black is a true 19th. Century classic. I think you will find your time rewarded.

The audio quality is so poor that you cannot unterstand this audio book. it's a shame as I have always loved it and would love to hear it. Do not bother to download unless they redo it.

My download sounded just dandy. Davina Porter reads well, and her charming accent lends a delightful touch to this rendition of "The Red and the Black."

Of all the books I read in college, this is the most memorable. Although many of the reviews I read here are unflattering, do not be deceived. If you enjoy wit, intrigue, and have a taste for period pieces, you will not be disappointed.

As an early adopter of audio, I started when classics were most of what was available and it was fortuitous because it caused me to re-read most of the great books and realize how much more they had to offer than I had got from them in callow youth. Recently I realized this was one I had missed and I was excited, knowing many consider it the greatest French novel.

Having finally got through it, I must say I am disappointed. It wasn't a terrible book. It was probably quite advanced in its day, just like they say. It was one of the first to dramatise the inner life of a rather undistinguished person. Trouble is, so many have done that since and so much better, that doesn't score many points with a modern reader.

The hero, Julian Sorel, is a carpenter's son who aspires to elevate himself to the upper middleclass, mostly by sleeping with the right women. But he is not dashing or amusingly scoundrely, he is insecure, self-absorbed and generally unappealing. His chief assets are a freakish memory and matinee-idol looks. He does get on, mostly thanks to friends (especially women) who are a lot better than he is, but screws up all his chances due to his own weak character and lack of sense. By the time the book ends the reader is glad to see the end of him. The book is touted for its satirical view of 19th C. French society but that is very much in the background of the hero's struggle and not neary so vivid or amusing as in almost any novel by Balzac. I was throughly captivated by Pere Goriot and Cousin Bette, but found the Red and the Black a slog.

I didn't notice anything wrong with the quality of the sound or reading.

I found the audio and narration good. At the time of its writing this novel may have been groundbreaking but I did not find it compelling. Perhaps some people enjoy observing the thinking of the weak, self centered, and ineffective protagonist. I did not care about the characters nor most of the story. After about sixteen hours in there were some interesting bits and the ending is slightly satisfying. As a short story this could have been powerful stuff. Overall, there are so many other truly excellent classic novels I would not recommend this one.

Missing the Appeal of This One

I got this as a book club read and was glad to see the narration by Davina Porter as she's very good. Unfortunately, through no fault of Porter's, this book falls flat. Truthfully, no one in my book club much liked it and most of us didn't finish. The central character is a self-centered prat and the author doesn't do much to make the reader care about what happens to him one way or the other. This book is notable more as a "first" than an enduring classic: It's considered the first "psychological" novel, a book that's more character study and focused more on the protagonist's thoughts than on the action or plot. It's a style that doesn't appeal to me, but even if you do like it, you'd do better with other works like Madame Bovary, etc.

Audible should remove this from its sales list. It was not understandable enough to listen to.

Garrison Keillor said that "The Red & The Black" was his favorite novel, and he's a hero of mine, so I gave this a try, I really did. I'm a great fan of audio books; have read at least 400 of them from various sources, and have given up on only a handful. This is one of the handful. I realize that it's from another culture in time and place, so I knew it might not be a quick, easy read. But sheesh! Feels like slogging through mud. Too bad. Any study tips, Garrison? Or, perhaps later, in my dotage....