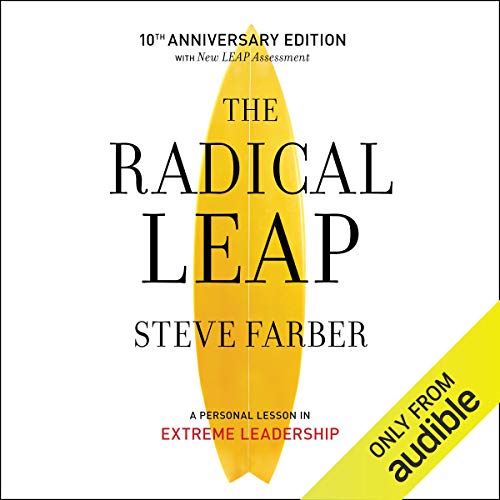 Narrated by the author. A new, tenth-anniversary edition of the leadership classic that was hailed as one of the 100 best business books of all time.

In his exciting and timeless business parable, The Radical Leap, Steve Farber explores an entirely new leadership model, one in which leaders aren't afraid to take risks, make mistakes in front of employees, or actively solicit employee feedback. His audiobook dispenses with the typical, tired notions of what it means to be a leader.

Farber's modern parable begins on a sunny California beach where he has a strange and unexpected encounter with a surfer named Edg. Despite his unassuming appearance, the enigmatic Edg seems to know an awful lot about leadership, and this brief interaction propels Steve into an unforgettable journey. Along the way he learns about extreme leadership - and what it means to take the radical leap:

Geared to people at any level who aspire to change things for the better, The Radical Leap is creating legions of extreme leaders in business, education, nonprofits, and beyond.

What listeners say about The Radical Leap

Yeah, this is the kind of book you either love or hate. The lessons in this book are valuable, but when it is told in a story format, it loses its gravity.

this is one of the best leadership books out. I'm changes by it and have grown because of it.... thanks.

Best book ever. Read it again for the 5th time. My son and I listened. Thank you!!

A must read for any position

This book is not a “how to”, although those books are very helpful but I’ve never read a such a life changing book written this way. This book is not only RICH in applicable prospective changing, life changing content but it also has an awesome story component with colorful, adoring, characters. I am so glad my mentor had me read this 💜

I really fell in love with the book from the start. The story that he uses to get his message across is absolutely endearing. I didn’t want it to end. I wanted to hear more about their adventures in here more lessons. This book gave me a ton of introspection and raised awareness to where I am lacking and succeeding in my own leadership. I highly recommend it!

The narrator was great and thought provoking. It took me about four sittings to complete the book within a five day period of time, mainly because of my busy schedule. I've sent an invite to my son so that he can take the LEAP. Hopefully he accepts.


This book reveals some of the biggest obstacles of a personal breakthrough in leadership. The fear of irrelevance and the intimidating establishment can stop us from changing the world at any level. we need to prove the potential of the leader in us at any level. Will pass it on!

Amazing! I loved this book. Will reread again!

I love the Narrator, it keeps the audio very interesting and the insight are priceless. one of my top 50 books for sure.