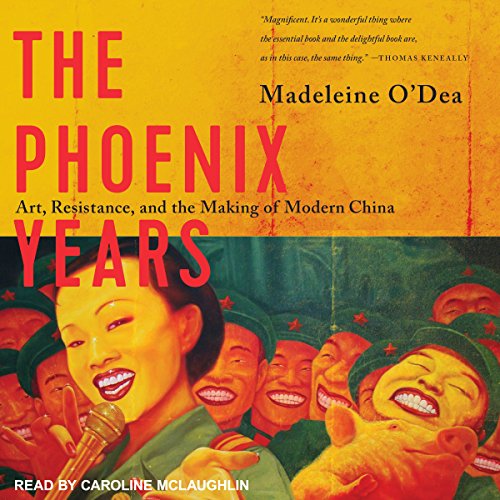 By: Madeleine O'Dea
Narrated by: Caroline McLaughlin
Try for £0.00

The riveting story of China's rise from economic ruin to global giant in the four decades is illuminated by another, equally fascinating, narrative beneath its surface - the story of the country's emerging artistic avant-garde and the Chinese people's ongoing struggle for freedom of expression.

By following the stories of nine contemporary Chinese artists, The Phoenix Years shows how China's rise unleashed creativity, thwarted hopes, and sparked tensions between the individual and the state that continue to this day. It relates the heady years of hope and creativity in the 1980s, which ended in the disaster of the Tiananmen Square massacre. Following that tragedy comes China's meteoric economic rise, and the opportunities that emerged alongside the difficult compromises artists and others have to make to be citizens in modern China.

Foreign correspondent Madeleine O'Dea has been an eyewitness for over 30 years to the rise of China, the explosion of its contemporary art and cultural scene, and the long, ongoing struggle for free expression. The stories of these artists and their art mirror the history of their country. The Phoenix Years is vital listening for anyone interested in China today.

What listeners say about The Phoenix Years

The story of how the art scene in China in the 1980’s is viewed by the government and how the artists use their art to show what’s in their hearts is both fascinating and chilling to hear. Madeleine O’Dea shows her deep understanding of the political situation and of the artists involved.
The narration was often very rapid and I had to concentrate hard to follow. I would have liked to have heard it in an Australian voice rather than American to reflect the authors heritage.

...and beyond, told from the perspective of artists, not political activists. a comprehensive, brilliant book