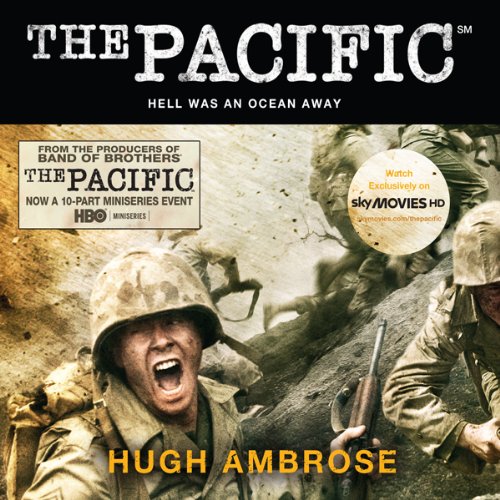 By: Hugh Ambrose
Narrated by: Mike Chamberlain
Try for £0.00

Historian Hugh Ambrose deepens the experience of the HBO miniseries The Pacific - revealing the intertwined odysseys of four U.S. Marines and a U.S. Navy carrier pilot and producing a powerful blend of first-person immediacy and historical perspective.

Sidney C. Philips, an easygoing Alabama teenager, enlisted along with a friend. 'Manila John' Basilone was the son of immigrants who found happiness in the rough-and-ready life of a marine. Eugene B. Sledge watched his best friend and his brother go off to war - and finally rebelled against his parents to follow them. 'Shifty' Shofner was the scion of a prominent family with a long record of military service. Ensign Vernon 'Mike' Micheel left the family farm to complete flight school.

Between America's retreat from China in late 1941 and the moment that MacArthur's plane landed in Japan in August 1945, these five men fought many of the key battles of the war in the Pacific. Here, Hugh Ambrose focuses on their real-life experiences and those of their fellow servicemen, enhancing and expanding upon the story told in the HBO miniseries.

Covering nearly four years of combat with unprecedented access to military records, letters, journals, memoirs, and interviews, this volume offers a unique historical perspective on the war against Japan, from the debacle in Bataan to the miracle of Midway, the relentless vortex of Guadalcanal, the black terraces of Iwo Jima and the killing fileds of Okinawa - and ultimately the triumphant yet uneasy return home.

These are the true stories of the men who put their lives on the line for their country, who were dispatched to the other side of the world to fight an enemy who preferred suicide to surrender; men who suffered hardship and humiliation in POW camps; men who witnessed casualties among soldiers and civilians alike; and men whose medals came at a shocking price - a price paid in full by all.

What listeners say about The Pacific

Making sense of history in the Pacific

Quite approachable for a listener - new to audio history. I have not seen the TV saga of this but the written work was very useful. The reader was fine -easy to listen to and my only real criticism is that occasionally you could feel the word processor at work - the cut and paste - that does not mesh with the rest of the narrative. But it was worth listening to. So - yes - we could use more work in this genre. Please - could we find out what life was like for the Japanese or the Germans, the Baltic States, the Russians, Norwegians etc. during the same period?

Good but not brilliant.

Good story. Annoyed increasingly by narrator pronunciation: for-waard etc. put me off somewhat an interesting idea to follow individual people through the war. It does mean there are gaps and didn't like the way the Japanese - Japs - were always described. But that is what you get following the time.

These authors tend to sanitise the racist attitudes of the Americans toward the Japanese (replacing ethnic slurs with proper designations) whilst casually describing obvious War Crimes as if such behaviour is natural and correct. A good corrective to this one-sided narrative is John Dower's book 'War Without Mercy' which carefully records the US War Crimes that were falsely justified at the time in exactly the manner used by these two contemporary authors. The killing of wounded is against the law - but was committed by the Americans because the Japanese were viewed as 'subhuman'. It is disturbing that this book follows that racist narrative without question.

The brutality of the Pacific war has almost now equal... every single one of the vets is a hero ! The world needs more John Basilones and less Trumps

I hoped this would be a great follow up to the mini series and it kind of is in terms of information but unfortunately the narrator just does not do a very good job at making the story. it seems like nothing more than a list of words to be read out in the same flat tone no matter what is being said. It's a shame because it is a story and could be told as one, but this has all the excitement of listening to an autoread pdf document, no change in tone etc. kind of just a list of information, not at all what I'd hoped for.

great listen to some very scary times, some very brave people out there and thank you

Good, but I had technical issues

This is very intresting book give you a new insight into the pacific war and the men who frought it and what they went though well wourth reading.