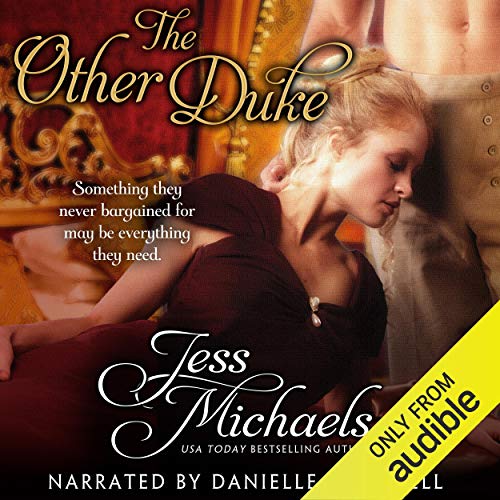 By: Jess Michaels
Narrated by: Danielle O'Farrell
Try for £0.00

For years Serafina McPhee has been engaged to marry the heir to the duke of Hartholm; and for almost as long, she has been struggling to find a way out of that engagement. When he suddenly dies, she does not mourn but thrills at the idea that she will be free. Unfortunately, best-laid plans go awry when the next in line for the title, her intended's cousin, Raphael "Rafe" Flynn, is forced to take over the engagement. But Serafina knows Rafe's reputation as a libertine and wants nothing to do with him, either, even if he is devastatingly handsome.

She proposes an arrangement: she will agree to the marriage and provide Rafe with his heir and spare. Once she has done her duty, he will let her go. Rafe is intrigued both by her beauty and by her utter disgust with the idea of being his bride. Women normally fall at his feet, not cringe away from him. However, since their arranged marriage is not something he can escape, he agrees to her terms.

But when he finds out on their wedding night the truth about her torture at the hands of his predecessor, he finds himself driven not just to fulfill his bargain with his new bride but to introduce her to desire. While they move closer together, surrendering to wicked pleasures, dangerous emotions may violate every agreement they've made.

What listeners say about The Other Duke

The Heroine has been bullied by her father, raped and sexual abused, from a young age, by her betrothed. She naturally has all the fears and hates that go with that experience. However, she is stoics and has learnt to tolerate what you can't change.
The Hero is spoilt rich, living a hedonistic lifestyle, he has no wish to change.
Naturally being such a hedonistic, he manages to persuade her in to his bed and things move forward with sensual pleasure as it's bases.
The secondary characters stay firmly in the background popping up now and again.

Parts of this story were heartbreaking and difficult to read. The author [very capably] made me feel the hopelessness of Serafina, the heroine of this story. But can you imagine being a woman of this era (early 19th century)...without a voice or choices of decisions? Suffering in silence the condoned abuses legally enacted upon you...and you must submit and there is nobody to help you even if you did speak up? There IS NO help. It is your lot to suffer quietly because you were born a woman and the person legally accosting you is your betrothed... a peer of the realm...a Duke.

Serafina McPhee is thought to be the most beautiful woman in London, with her long, honey blonde hair and pale, pale blue eyes. She's blessed with a creamy porcelain complexion and naturally pink lips, soft, and alluring. But Serafina is more than just a beautiful face. She's intelligent and in spite of her hardship --- she retains a sense of light hearted humor. She constantly strives to bring joy to others and better those around her. She strives to make a difference. And she is secretly thrilled when her fiancee' is killed....only to have her happiness collapse upon her because she discovers she'll still be forced into a marriage against her will....with the new Duke of Hartholm.

He's a seducer of women...a gambler and all around rake. He has a scandalous reputation and doesn't care. He thrives on adventurous risque behavior. Raphael (Rafe) Flynn is an Adonis. An angel of beauty full of charm with his longish blond hair and bright mischievous blue eyes. Rafe usually lives a charmed life..but all his luck ran out the day his cousin died forcing Rafe to [reluctantly] inherit the title of Duke of Hartholm and all the lands that come with that title as well as his deceased cousins' fiancee. His life has become a nightmare.

This story was, simply put, sweet...and even though it was oh so completely predictable and unoriginal, it was mildly entertaining with the author making a scandalous family, honorable...and a supposedly honorable Duke, scandalous. However I found Serafina tiresome because her reasoning for adamantly refusing to pursue her relationship with her considerate, patient, drop dead gorgeous husband...this man who comes to practically worship her...well, it didn't make sense. The whole idea (her refusal to accept him) was contrived and overdone. She wouldn't allow herself to accept him due to the violation and abuse of her past...even though Rafe proves to her that he's a gentleman and she eventually trusts him. Likes him even. Her reasoning made sense at first but she refuses to allow him to care for her no matter how kind he is to her...no matter how much he proves himself to her. Thank goodness for Serafina's best friend, Emma...she was the only voice of rational reasoning for Serafina. This story had some mild, (again, predictable), extremely weak suspenseful drama...and some sweetly soft erotica. Extremely fast paced. I won't be reading the rest of this series only because they're so predictable, contrived and unoriginal stories.

Danielle O'Farrell was good with the delivery of the story

The story wasn’t bad, if rather simple. The hero seemed to be a great guy who handled the sudden, life changing situation in an adult, rational manner. Rafe lived up to the ducal contract to the letter and tried to make things as easy for Serafina as he possible could. He did not want to marry any more than she did.

Yes, Serafina had a miserable childhood. All emphasis was on her beauty and not much confirmation of her other attributes. Her parents were not kind and she didn’t experience any love that I could see. Her original fiancé raped her repeatedly before his death. But she seemed to get past that fairly quickly when she was taught gentle loving by her new husband.

Aside from all that, I just wanted to smack her. It was obvious from the start that her husband adored her, but he had made a bargain with her before their marriage to allow her to live freely on her own and she was determined not to accept his love and to force him to let her leave. Of course, she didn’t really WANT to leave, but had decided it was best for both of them.

The story left me wanting something more. A heroine with a brain would have helped. I’m interested in hearing about Rafe’s sister, so I’m hoping the second book in the series is better.

One other thing – while the narrator’s voice was very good she constantly mispronounced words. I’m not talking about foreign or difficult words. I’m talking about simple words. Has Audible done away with editing entirely?

Worth a credit? Definitely not. I paid a miniscule amount because I wanted the Kindle book as well. And that’s about what it was worth.

I LOVED THIS SERIES

I see some of the reviews saying there was too much sex in this series...I did not think that was so. I happen to be one of the romance fans that like a good amount of steam and this series had just enough. The story line was good and kept me listening till the wee hours. The narrator was very good also. I am always leery of a narrator that I have not heard before but I took a chance and she was very good. I highly recommend this series, however, be aware of a steam rating of about 7 out of 10. Can't wait for the next book in the series. Good Job!!

Hot is an Understatement

This book is pure sex with a little bit of plot to tie the sex scenes together....
The reader is very good.

Listen for the Love Scenes....

Not embarrassed to admit ...sometimes I just wanna listen to a book for the love / sex scenes. There are plenty in this book. Is the story great - not really. Are the characters good - I liked Rafe.

It is steamy, but not over the top.

Worth a credit - probably not - on sale 1/2 off? Yeah I bought the whole series on sale.

Always a hit with a Jess Michaels romance!

Story: Lovingly written, a little watery plot wise but the passion in the writing makes up for it.

Narrator: Enjoyably good!. I loved her voices, intonation, cadence, the softness of it was gentle rather than whispery ...

the plot was intriguing and characters had depth, not developed as much as possible yet it had a lovely feel so an enjoyable experience and a book which I will read again.