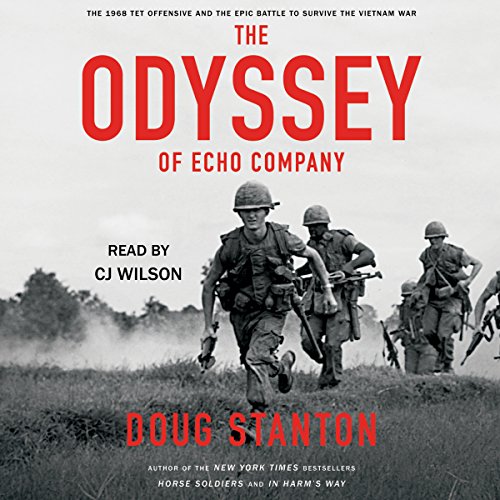 The Odyssey of Echo Company

A powerful work of literary military history from the New York Times best-selling author of In Harm's Way and Horse Soldiers - the harrowing and redemptive account of an American army platoon fighting for survival during the Vietnam War.

On a single night, January 31, 1968, some 100,000 soldiers in the North Vietnamese Army attacked 36 cities throughout South Vietnam, hoping to topple that government and dislodge American forces. The 12 American boys of the recon platoon of the 101st Airborne Division, average age 19, are from small farms, California beach towns, and big cities like Chicago, and they are cast into a war they neither understand nor ultimately feel they can win. The fighting was hand-to-hand, nonstop, and waged in endless small battles that forged this group into a lifelong brotherhood of survivors. The Odyssey of Echo Company is about the young men who survived 60 days on the run from the enemy during the Tet Offensive, at the height of the Vietnam War.

Each young man lived 100 years in these days and came home to a country that did not understand, and didn't try to understand, what they had survived. They came home winners because they were alive but were losers for having fought there. When they arrived, they landed in San Francisco, took off their uniforms, and walked back into America, where they fell silent and realized that not many wanted to hear the remarkable story they had to tell - until now.

Based on hundreds of hours of interviews, dozens of detailed letters written to and from Echo Company soldiers, a huge trove of Pentagon after-action reports, and travel to the scenes of battle with the American soldiers and some of their Vietnamese enemy soldiers, The Odyssey of Echo Company breaks through the wall of time to tell this important story of ordinary people in extraordinary circumstances.

What listeners say about The Odyssey of Echo Company

A great book. I would highly recommend.

A great book. Harrowing and thought provoking in places. Also covers the life of the soldier post war, and returning back to Vietnam. The performance is great, at times making you feel like the reader was actually there.

I did not want it to end, brilliant book.

Loved it, so well written and the narration was the best i have had the pleasure to listen to.

A very good insight into the minds of a soldier fighting not only a war but his own thoughts and feelings, very moving at times and brought tears to my eyes at times , well worth a listen .

I feel bad about giving this 5 stars as a story as it’s a personal account and deserves far more when you consider all that Stan and his platoon went through.
I think we the narrator dies an excellent job to portray the feelings and images of war in Vietnam. I could almost feel that I was watching things unfold around me.

What a great listen. Fascinating first hand account of
the war.
At times in my headphones I felt I was engaged in the battles.
Well narrated. Now I’m gonna listen to it all again !!

Great look into what a Nam solder endured.

I would recomend this book to anyone who is interested in the Vietnam War. My father served 2 tours there in the Marines and I have studied this war for years. My father's health is declining rapidly and in listening to this book it gave some of the best insight into my father and his war.

The most intense Nam combat I've ever heard

Buckle up, Doug Stanton takes you on a harrowing ride through the eyes of Stan Parker. Attached to a Recon platoon, Stan saw intense firefights during the Tet offensive. Stan escaped death so many times it's incredible how lucky he was. During Tet and mini-Tet the US suffered the most KIA during the war. I've read about the fierce battle for Hue and Echo Co. was 15 miles north of Hue while that region was under constant attack for months. Story even discusses subjects as PTSD and Agent Orange which effected many in Echo company.
I'm really enjoying the resurgence of Nam combat vets who are now telling their story like the WW2 vets of the late 90's.
I was captivated, we need more books like this!

A story that pulls at your heart strings. You hear the internal struggles of a good man in a hellish situation and realize the horrible choices these people had to make. Something I will never be able to fully comprehend. I want to say thank you for this story.
Cpl. Wright
USMC

Just an incredible story and odyssey

So well written...actually had to put the book down a few times given how moving and stirring it was. So very well done. Am glad that Stan asked it to be written...

Would recommend to anyone who enjoys and can handle war books. A must read. d

WOW, could not stop listening.

I understand better what so many of my friends endured during the conflict. thank you Doug and to all who served.

A story that needs to be told

After reading dozens of books about the Vietnam war this one captures so many more concepts than any other and in a truly amazing way. A must read

As a veteran who was in Danang Bay multiple times during the war and spent 3 years in the hostile fire zone, I always wished I’d taken orders to a PBR, till I listened to this book. These men were indeed brutalized by the war, and I thank God He didn’t send me there. And I thank the men and women who did go in my stead; God bless them!

An attempt of a historian to be a novelist

Listed as history, the author is enamored with melodrama which appears forced and is in fact boring

Put this one right up there with Band of Brothers. Fantastic story, equally written. True heroes.