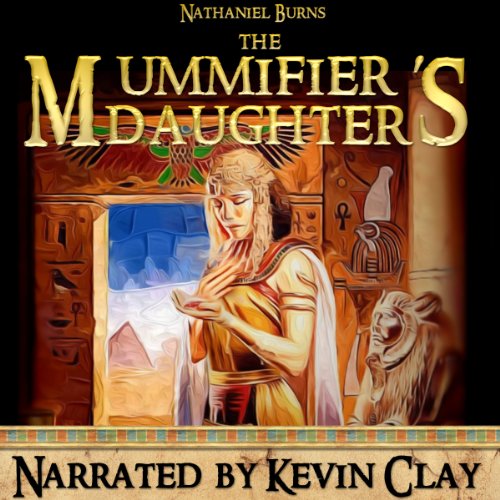 By: Nathaniel Burns
Narrated by: Kevin Clay
Try for £0.00

This is Young Neti-Kerty‘s dream: To follow in her father’s footsteps and become the first female mummifier in Thebes.

Shabaka, the secretive Prefect, the Pharaoh’s special envoy charged with combating crime in the capital of the Pharaoh’s empire, also often makes use of Neti Kerty’s special talents. With her powers of deduction and knowledge of the dead, she has already helped solve many crimes.

But then the unimaginable happens. Her parents are cruelly murdered, and Neti-Kerty’s small, idyllic world shatters. Together with Shabaka the Prefect, she embarks on the search for her parents‘ murderer. Surviving many shared adventures, they stumble upon a monstrous conspiracy...

The Mummifier's Daughter carries us back to a land steeped in gods, god-kings, ritual and magic. It paints for the reader a detailed picture of Pharaonic Egypt in all its shadowed glory. Faithfully recreating one of the most remarkable eras in Egypt’s history, bestselling author Nathaniel Burns weaves a shudderingly ominous tale of ancient Egypt’s mysteries with a cast of characters the modern reader will recognize even though millenia have passed.

So light up the incense, sit close to the light and draw back the curtains on the shadowed past with this gripping tale of love and intrigue among the living and the dead in one of history’s most intriguing civilizations.

What listeners say about The Mummifier's Daughter

I have listened to three chapters of this drivel and wish I could delete it completely. It is impossible to suspend. reality and enter into this story it is so cluky with unlikely coincidence s.

So so story ruined by appalling narrator

This could be a fairly good story but I couldn't get past the second chapter because of the dreadful narration.
Kevin Clay reads it as if he's doing a sensational Sun advert and I kept expecting to hear ' ONLY 99p!!!' at the end of a sentence. He has no inflection in his voice and he reads so fast he's almost babbling (I actually checked to see if I had it at the right speed - I thought I must have accidentally made it x1.5 or 2). There is virtually no difference in the voicing of the different characters, and while he cannot help the hard American accent, it jarred as it had no relation to the story or the time and place of the setting.

Why is a man narrating a woman’s story??

I don’t what the hurry was but the narrator seemed to be in a contest to see how fast he could narrate the story and get to the end. There was no “performance” I could have done a better job and I don’t know the first thing about how to “perform” reading. I love these books. I love this story. It may. It be the most involved or sophisticated novel but there is a lot to work with. I wasted a credit.

This was very different, I love historical romances but this turned out to be a mystery instead😃. Nice twist. Very strong girl and and strong male. The narrator almost read me to sleep half way through, luckily I had to get up to do some chores.

if you're a stickler for the minuta of Egyptian history, you're not going to like this book. other than that little problem, the book was good. I didn't much care for the narrator. the main character is a woman/girl so I expected a woman to narrate. he did do a good job distinguishing the voices. overall, it's a pretty good work of fiction.

The Mummifers Daughter, This was a fun book to listen to, nothing heavy to clog up your mind. I did find that the narrator must be a fan of speed reading, he rushes through the story like he had another place to be that was more important. Overall, still enjoyable.