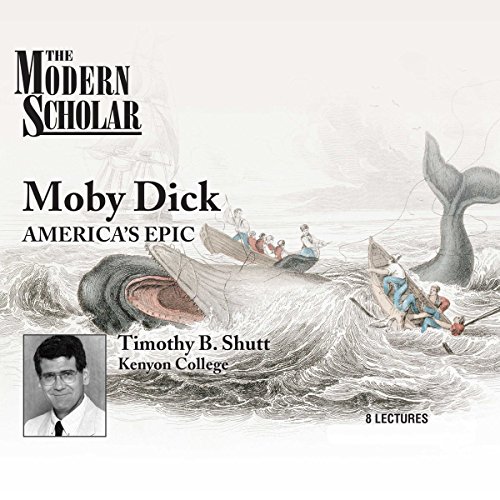 American writers have long sought to compose "the great American novel", or "America's epic", Mark Twain's Huckleberry Finn and F. Scott Fitzgerald's The Great Gatsby have been advanced as plausible contenders for the title, but no work can mount a more substantial claim than Herman Melville's Moby Dick, or The Whale. In this engaging series of lectures, beloved Modern Scholar professor Timothy B. Shutt guides listeners on a fascinating investigation of the tale, examining the work as a whole and exploring the life of its creator, Herman Melville.

What listeners say about The Modern Scholar: Moby Dick

Some parts are good

I read Moby Dick a few months ago and was eager for some interpretive assistance with this brilliant but very strange novel. Shutt does provide some very insightful commentary during the middle "chapters" of the audio guide and his insights improved my understanding of the book. During these sections, he reads well-selected passages from the novel to illustrate his points, however during the last three chapters or so, he clearly ran out of original content and filled almost all the time with reading from the book! For someone who had read the book and was looking for commentary, this was really boring, and it would also be a boring summary for someone who hadn't read the book. I wish the audio guide had just been kept to the length of the insightful parts without the added filler, or, better yet, that Shutt had developed more commentary on the book, since, although he touched on many interesting aspects, there is so much more to discuss about Moby Dick.

Still, I would recommend this guide for the value of the middle chapters.

A good lecture series on Moby Dick but...

It should have included more. In fact, I suspect Dr. Schutt recorded more and it was edited out. He is interesting to listen to, especially when he reads from the text so I enjoyed the lectures.
I just wish he had told me more.

Professor Shutt is obviously a learned man and while the content of his lectures is rich in descriptive detail, his delivery style lacks spontaneity and seems to me too slow.

In addition when describing Melville genealogy he volunteers that Dr. Shutt is distantly related to the author. This serves no purpose except to highlight his narcissism. I've nothing against narcissism when it is kept in check. Personally, I'm related to the whale but I don't go around announcing it to the world. (Yes, I wish the good professor had seasoned his considerable erudition with a sprinkle of humor, here and there.)

Anyhow for serious students (to be) of Herman Melville this is a valuable set of introductory lectures.