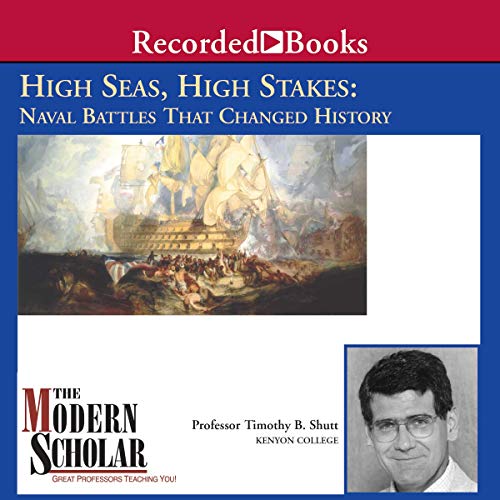 Naval battles have long captured the popular imagination, from confrontations between Athens and Sparta in the ancient world to the epic conflicts that took place during the World Wars and beyond.

In this riveting series of lectures, Professor Timothy B. Shutt of Kenyon College explores the naval battles that have helped to establish empires and have changed history.

Throughout the course of world events, as trade and commerce grew in importance and nations became ever more dependent on the import and export of all manner of goods, control of the world's waterways and shipping lanes became a key determinant in which nations reigned supreme. As demonstrated so aptly in the World Wars, blockades at sea can strangle a nation as effectively as sieges laid against walled cities of old. With studied insight into the events that have shaped the world over the millennia, Professor Shutt imparts an understanding and appreciation for the importance of naval warfare in world history - and of the grandeur and daring that define these awe-inspiring clashes.

A very enjoyable series of lectures, the descriptions are so good you can really picture what's going on and the necessary historical background is given without taking away the focus on naval matters so you learn a lot more than you set out to.

Very enjoyable and he obviously knows his stuff!

Didn't quite float my boat

Timothy Shutt has an obvious enthusism and knowledge for his subject but I don't think that the lecture format works that well. Having become used to almost faultless narration in other titles, the rambling lecture style is unexpected. Some of the battle accounts such as Midway are well explained but most of the ancient ones suffer though the lengthy explantion necessary to put them in historical context. I have read a far more gripping account of the Battle of Lepanto for example.

I expected a survey course, some direction for additional reading. What Shutt delivered was often intellectually slipshod and technically amateurish.
As for the mental laziness on display here: Even in a survey course, I expect a lecturer to know how to pronounce the names of the people and places under discussion, not to guess at them, as Shutt repeatedly does.
In the opening lecture, Shutt suggested that he would explore themes such as the relationship between merchant oligarchies and naval power. Instead, the lectures often delivered score-keeping. This side lost X number of ships. The other side lost a lot fewer, because they had better ships or they practiced more, or some similar generalization that Shutt fails to explore. The effect is disturbing. OK. Some of these battles took place a long time ago. But those were human beings in those fights. They wanted to live, and many suffered terribly. I'm not asking for Shutt to burst into tears over that. I'm asking him to show some discipline, to draw some broader conclusions, to develop a theme. Other historians do that. Score-keeping insults the dead, the reader and history itself.
On to the technical sloppiness: At the end of the series, a narrator credits three editors. I cannot fathom how they might have spent their time on this project. Certainly not on correcting errors. At one point, I got so exasperated that I actually started keeping a log of Shutt's stumbles, but I kept losing track. There were lots and lots and lots. I can understand that Shutt might stumble in his delivery. What I can't understand is how the publisher could have expected payment for such sloppy editing, or why Audible actually bought it.
I bought it because I didn't know how awful it would be. I wish I hadn't.

This is a lecture series by a professor on 2000+ years of naval history. Unfortunately, it was very disappointing.

Its major failing is that essentially it was just a factual recounting of major battles using a couple of sources each. The professor provides a bare minimum of analysis for each battle and for Naval history in general. He does not explain why the battles he chose were of particular importance or their lasting consequences. Nor does he show why one side prevailed. He does not explore the developments in naval science or tactics over time.

If you want a crash course in the facts of about 15 major naval battles, that this is a good choice, but the lack of analysis or insights make this a poor value.

Instead read Keegan's History of Warfare, or Alfred Thayer Mahan.

I Agree with Chris and Matthew...to a Point

Unlike Professor Shutt's lectures on Hebrews, Greeks and Romans or his masterful guided tour through Dante's Hell, Purgatory and Heaven, these talks meander. The particular engagements are never placed solidly in their larger military, social or economic contexts. After reviewing the main characteristics of typical naval powers in lecture one, those criteria are seldom referred to again.

Things get better with the lecture on Trafalgar and after--but then I know that period pretty well and may have been filling in the blanks for myself. The section on the Russo-Japanese War was all new material to me and a good grounding for someone who will probably never pick up a book on the subject.

But only once do I recall getting a classic Shutt-like insight: near the end of the lecture on Midway he illustrates the American Way of War (high tech/low casualty) by observing that the winning blow was struck by fewer than 100 men--and that the cutting edge of that force may have numbered only 30. A stunning point that rivets the attention--as Professor Shutt at his best does all the time--and puts the victory in a wholly new light.

But while I agree with Chris and Matthew on all this, I have a confession: I like Professor Shutt. I enjoy his enthusiasm, his delivery, his personality as it comes through the headphones. Sometimes I think if Audible sold a recording of him reading the phone book I'd put it on my Wish List. While I learned very little that was really new, I got a good, solid review of naval history that made the train ride home every night far more enjoyable.

Good overview for the masses. . .

Don't think that this program is getting the respect it deserves. . . certainly, there is not a lot of details about the particular circumstances of the specific battles, but. . .this is a survey that spans thousands of years, and . . . is intended to give you some pocket "takeaways" and a basis to learn more. I have listened to over 400 audible books, and . . . about a third or so I just can't get through. This wasn't one of them. The lecturer has genuine passion for the material, and the material is presented in an interesting and easy to follow format. Recommended for the uninitiated . . .and as for the history war buffs, see if you agree or disagree with the perspectives. . .

Professor Timothy B. Shutt has perhaps the most entertaining voice in all of audiobook history. Just listening to him is pure entertainment. His lectures are also very engaging, full of fun historical details that really bring the past to life.

Not one of Professor Shutt's stronger efforts. Lacking in focus for many chapters. Absolutely no editing as far as I can tell and really distracts from the experience. Constant errors, redos, silent gaps where he seems to have lost his place and even asides to the control room. By far the most unprofessional audio book I've ever listened to.