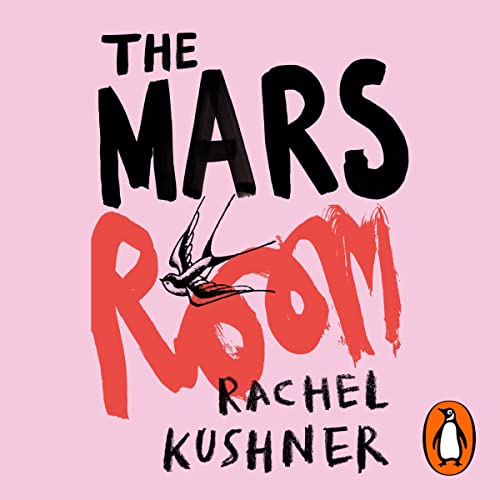 Random House presents the audiobook edition of The Mars Room, written and read by Rachel Kushner.

Shortlisted for the Man Booker Prize 2018.

Romy Hall is at the start of two consecutive life sentences, plus six years, at Stanville Women’s Correctional Facility. Outside is the world from which she has been permanently severed: the San Francisco of her youth, changed almost beyond recognition. The Mars Room strip club where she once gave lap dances for a living. And her seven-year-old son, Jackson, now in the care of Romy’s estranged mother.

Inside is a new reality to adapt to: thousands of women hustling for the bare essentials needed to survive. The deadpan absurdities of institutional living, which Kushner details with humour and precision. Daily acts of violence by guards and prisoners alike. Allegiances formed over liquor brewed in socks, and stories shared through sewage pipes.

Romy sees the future stretch out ahead of her in a long, unwavering line - until news from outside brings a ferocious urgency to her existence, challenging her to escape her own destiny and culminating in a climax of almost unbearable intensity. Through Romy - and through a cast of astonishing characters populating The Mars Room - Rachel Kushner presents not just a bold and unsentimental panorama of life on the margins of contemporary America but an excoriating attack on the prison-industrial complex.

"More knowing about prison life [than Orange Is the New Black]... so powerful." (New York Times)

"One of America's finest writers." (Vogue)

What listeners say about The Mars Room

This book really blew me away, so much so i was compelled to write a review for once!
The prose is so beautiful in places, and quirky too in a way which reminded me of Chuck Phalanuick's "Invisible Monsters". This goes way beyond "orange is the new black"; this is some deep stuff. It's an insight into the real lives and minds of women (and men too) it feels so tangible i was sad to not be hearing any more from the protagonist when the book was done!
There's not alot to be said without giving much away, but it ended in a way which i had really not anticipated, it was poignant and beautiful and made so much sense in retrospect. I'd imagine that most people would get something from this book; the characters are so excellently drawn, the stories are painted beautifully, each relating to the other characters plot lines. Give it a go, it's really something special.

Good, I suppose. Colorful characters, a glimse into a world I cannot believe. Inhuman and thoroughly depressing. After reading this book, I'd rather not visit San Francisco. I guess it is important that these stories are told. It was just too sad for my weekend read, and not quite what I had expected. I think I expected something a bit more Dickensian. Some humour in it all. It was just naturalism all the way.

Enjoyed is not the right word. it's a great book but disturbing to read. nevertheless I recommend it.

I'm sure the book is great but I had to turn it off a few minutes in, could not stand the narrator's voice, so unnatural! sounds like siri is reading to me

This is such an incredible story and had me gripped from the start. 'Romy' was totally believable, all the characters are well written and rounded and I could picture them all. It's not a 'jolly' read, but then it's not a 'jolly' subject matter, it's gritty and dirty and desperate and thought provoking.
I really liked Rachel Kushner's style of narration, it's unhurried and reels you in beautifully and I completely get why she would narrate her own story, as I don't think anyone else could have done it justice.
10/10 from me.

I was hooked from the beginning. Brilliantly written and read by the author. My favourite novel for a long time.

This is a really beautiful sad story. For me the narration fits so much with the writing that it felt almost like an autobiography. One of the best books I have read/listened to in a long time.

I love the story and I love the author’s voice on narration. Bit like Hemingway for our times

Important story but did not enjoy narration

I think the story was important and well told. I am wondering if I would have enjoyed this more as a book rather than audio-book. The narration, which I had high hopes for because of it being read by the author, did not work for me, probably a preference thing.