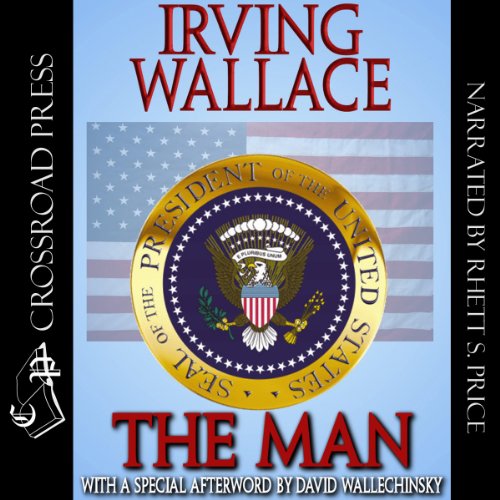 By: Irving Wallace
Narrated by: Rhett S. Price
Try for £0.00

The time is 1964. The place is the Cabinet Room of the White House. An unexpected accident and the law of succession have just made Douglass Dilman the first black President of the United States.

This is the theme of what was surely one of the most provocative novels of the 1960s. It takes the reader into the storm center of the presidency, where Dilman, until now an almost unknown senator, must bear the weight of three burdens: his office, his race, and his private life.

From beginning to end, The Man is a novel of swift and tremendous drama, as President Dilman attempts to uphold his oath in the face of international crises, domestic dissension, violence, scandal, and ferocious hostility. Push comes to shove in a breathtaking climax, played out in the full glare of publicity, when the Senate of the United States meets for the first time in one hundred years to impeach the President.

What listeners say about The Man

Returned, could not listen to it

Would you try another book from Irving Wallace and/or Rhett S. Price?

The narration is really poor. The narrator tries to do voices, but all his voices either sound the same or are laughable. In a book about an African-American president, I thought all the voices sounded African-American and thus could not tell them apart. And the women's voices were particularly bad- like men in a very bad cross-dressing skit. More annoying was the narrator's tendency to put the emphasis on phrases like "he said" in an odd place and thus make this filler phrases jar the listener every time. Then we have the problem that Wallace's book has not aged well at all. It's that 1960's thing where a white man is altogether too self- conscious and preachy in his writing. Also, even for the time the women characters were all weak, man-crazy or man-desperate, and entirely too dumb and tentative to be working in the white house or entertaining senators. The plot showed signs of being laughable even given the historical period in which the book was set. I tried to listen to it, but had to return it after an honest effort.

What didn’t you like about Rhett S. Price’s performance?

for it's time the book was a groundbreaking rumination on having a black president. I remembered it fondly which is why I tried it now.

I would listen to this one again. I'm sorry it has ended. I was amazed at the depth of understanding the author had for the main charactor. It made for a very powerful book as I stood with him (in his shoes as it were).
I wonder how the author got close enough to see so clearly into those painful places?.
It looked at race and the effects of race at a very gut level. The book allowed me to be entertained while it challanged me to think. That's what made it so engaging for me. 32 hours was not enough. I wish it had a sequel. If you like law, White House goings on, and solid human struggle to grow and find acceptance, read it

I truly enjoyed this book from start to finish. Wish it was a movie. Amazing

I enjoyed the story other than the length. Some of the voices were like chalk scratching on a black board

Best book I listen to this year. I have to admit, the first few chapters moved slow but after that pure gold.

Excellent, well-written book. However, although the narrator did an excellent job of voice characterization, his mispronunciations of many relatively common words was somewhat distracting. “Sword”, “rendezvous”, “lithe” and others were routinely shredded. Would it stop me from listening to another book he narrated? No, not if that was the only edition available. But if there were another option, maybe.

It was a long story to listen to, but worth it. The narrator did a good job of narrating, however some characters were awful to hear. The racist southerner congressman was nails on a chalkboard and you just had to power through it. In all though, it is worth your time

This should be a must read for all Americans-masterfully written. Engaging storyline that continues to read into this century.

Lengthy but quite good

Very good book. Lots of history woven in. The voice for Sen. Miller is very annoying, but Sen Miller was very annoying. The characters came to life with their struggles to do what was right vs what was convenient or acceptable. There were also strong passages detailing the various plights of blacks. Although some of the issues don't still exist, eerily/sadly/frustratingly some of the issues still plague or nation. Enjoyed it!

This was, given the year in which I read it juxtaposed with the year in which it was written, an interesting story. However, the narrator was terrible! Almost all the voices, with perhaps the exception of the President, had very strange and unnatural intonations. Add to that the narrator's mispronunciation of so many basic English words, the book was almost impossible to 'read' as an audiobook.