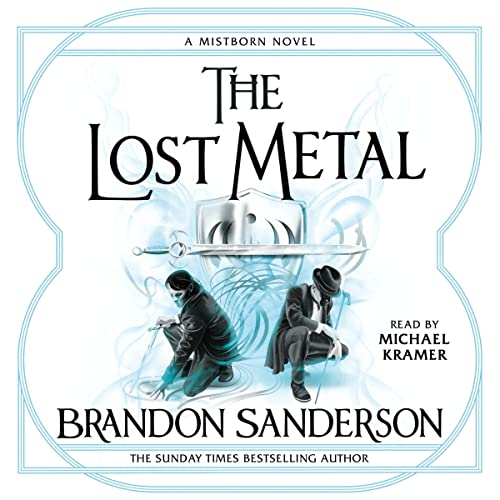 By: Brandon Sanderson
Narrated by: Michael Kramer
Try for £0.00

Return to New York Times best seller Brandon Sanderson's Mistborn world of Scadrial as its second era, which began with The Alloy of Law, comes to its earth-shattering conclusion in The Lost Metal.

For years, frontier lawman turned big-city senator Waxillium Ladrian has hunted the shadowy organisation the Set - with his late uncle and his sister among their leaders - since they started kidnapping people with the power of Allomancy in their bloodlines. When Detective Marasi Colms and her partner Wayne find stockpiled weapons bound for the Outer City of Bilming, this opens a new lead. Conflict between Elendel and the Outer Cities only favours the Set, and their tendrils now reach to the Elendel Senate - whose corruption Wax and Steris have sought to expose - and Bilming is even more entangled.

After Wax discovers a new type of explosive that can unleash unprecedented destruction and realises that the Set must already have it, an immortal kandra serving Scadrial's god reveals that Harmony's power is blocked in Bilming. That means the city has fallen under the influence of another god: Trell, worshipped by the Set. And Trell isn't the only factor at play from the larger Cosmere - Marasi is recruited by offworlders with strange abilities who claim their goal is to protect Scadrial...at any cost.

Harmony's vision of future possibilities comes to an abrupt halt tomorrow night, with only blackness after that. It's a race against time, and Wax must choose whether to set aside his rocky relationship with God and once again become the Sword that Harmony has groomed him to be. If no one steps forward to be the hero Scadrial needs, the planet and its millions of people will come to a sudden and calamitous ruin.

What listeners say about The Lost Metal

Overall the Weakest of the Mistborn Series

A lot of people are going to love this for the emotional gut punch at the end and I do as well, that's why it gets a 3 for story, as that itself raises it up more.
But overall this is a weak entry into the Cosmere and the weakest Mistborn series by by.

Previously we'd gotten murder mysteries given form with an added western feel to it and that's perfectly fine, but the unfortunate nature of this book highlights a big issue in how rushed it feels. What Brandon wanted to do was to cap off this Era of the Scadrial Chronicles with hints towards further developments in magic and technology and it would've worked, if there'd been build up for that, except there hadn't been.

The conflict, the development, the planning and placement of everything is rushed, from Bilming to Elendel, nothing is earned here and with the extremely convenient bow on every thread left dangling. I'm of the opinion that Brandon lost control of this plot 2 books ago.

He needs to take his time with things now, this is a warning sign of poor writing slipping through with yes men surrounding him who won't tell him his plots are bad. I fear for the next big Cosmere book if this trend continues

Waited years to be this disappointed

Well if you made it this far into the series you are going to read it anyway, too many themes that had already been resolved in previous books are rehashed again and setting up other books to come

Great ending to this part

Great ending and wonderfully performed. I look forward to the final era of the mistborn, but I think I'll have to wait until all the books are written. I simply want to read the next in the series too much to wait years between books. This last book had both some of the best action and most emotional moments of any the books so far

Sad to see the end of this era and of Wax and Wayne, but another fantastic performance from Kramer bringing all of Sandersons characters to life. Little disappointed the Mask people didn't have much to do with the story but it was excellent nonetheless and I can't wait to see where the next era takes Scadriel, definitely enjoying other characters from elsewhere in the cosmere having more and more of a place in other books and even hints of places we've never read about before!

Just wow! The cosmere coming together! Date t say more incase I give anything away!

*Puts on a reviewers hat*

I enjoyed the book. I started it and read 31 chapters and had to restart. Something made me listen and not hear. I couldn't figure it out but on my second attempt I kept reading until the end. Good book with more moving parts than usual. Lots of foreshadowing of other worlds and what's coming. Hints and tips along the way

Book has a good bit of heart which I like about Brandans work. It can make things hit harder in the right moments and let's you feel your heroes triumphs in others.

Another success, enjoyed the immersive experience once again as with all previous stories. Attention to detail and exciting storyline never fail to deliver. Thank you Brandon Sanderson.

After being absoluely thrilled by books 1 -3 this was a huge disappointment. Nothing original, just a long slog of boss fight after boss fight. I think this series has run out of steam.

Everything you want in a Sanderson book

The narrator, as always, does a wonderful job with all of the different accents. It really does bring the book to life. The book itself was brilliant, fast paced, funny, and emotional in all the right places. Great stuff

Very satisfying wrap up with some sadness.

An exciting conclusion to the second era with lots of character to enjoy. I am already interested to see how the third will shape up.

If you love the Cosmere and Mistborn series this book is a must. The character development is amazing and it ties up loose ends yet leaves you with more questions which I really enjoy.

The last installment of Mistborne Era 2 does not disappoint. Mystery, plot twist and lots of lore... yeah

a tremendous finish for a great series

this book deals with so much. a lot of open questions are answered, both from the main storyline and with a lot of Lore about the world. additional success.

Best book of the cosmere so far!

This book touches a lot with the intricacies of the Cosmere and how investiture works. Highly recommend to read pretty much all the books there are right now in the Cosmere before reading this one, though it is not mandatory. It is absolutely fascinating how Brandon is slowly tying it all together!

It sets up the larger Cosmere, and is in it self enjoyable. I reccomend.

Most people love hearing Michael Kramer and Kate Reading narrate audiobooks, and their opinions are valid. It’s just a matter of preference though and I think it would be useful to get other narrators for the British audiobooks. I really did not enjoy Michael’s narration here, though I’m sure most will disagree. This is not a personal criticism, just a preference.

Narrators are essential for the enjoyment of an audiobook, and I feel the narration here hampered my experience.