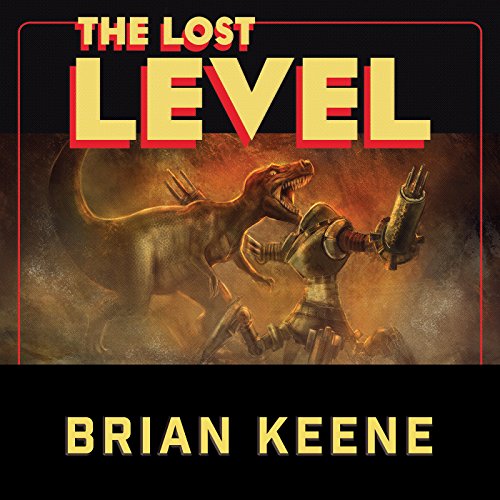 When modern-day occultist Aaron Pace discovers the secrets of inter-dimensional travel via a mystical pathway called The Labyrinth, he wastes no time in exploring a multitude of strange new worlds and alternate realities. But then, Aaron finds himself trapped in the most bizarre dimension of all - a place where dinosaurs coexist with giant robots, where cowboys fight reptilian lizard people, and where even the grass can kill you. This is a world populated by the missing and the disappeared, a world where myth is reality and where the extinct is reborn. Now, side-by-side with his new companions Kasheena and Bloop, Aaron must learn to navigate its dangers and survive long enough to escape...The Lost Level.

Apex is proud to present the first book in Grand Master Award winner Brian Keene's long-awaited new series, a loving ode to lost world classics like Burroughs's Pellucidar, Howard's Almuric, and Lansdale's The Drive-In, but with a thoroughly modern twist that only Brian Keene could conceive.

What listeners say about The Lost Level

Very weird pauses.... all the time... almost always very weirdly positioned.... for no reason at... all and drags... when he shouldn't...

How on earth did this pass any QA?

I heard books where the narrator was AWEFUL but still managed to enjoy the book, but I cannot stand this!!! It is INSANELY distracting and cannot concentrate on the story, at all!!

Luckily, this was not my first book from Brian Keene. I am a huge fan, and I know I will love this, so I will persevere, but it is very difficult.

Update: I finished the book. The narration is intolerable, but the story is good. It's not his best imho, but I still enjoyed it a lot.

HIGHLY suggest you start with another book of this author if you haven't heard any before (earthworm gods is the one I would suggest as a first one), but definitely give it a go if you're a seasoned listener of his novels.

Hope this was a teaser to more

I really enjoyed this book in part and it kept the passage time while I travelled. However the ending was swift and I felt like Brian just lost interest in writing it as the ending was very anti climactic and a little dull, not nearly as good as his other books. I understand this will lead to others in a series but can't help that I feel a little cheated.

Nazis., dinosaurs , time travel, missing socks on another planet, slug monsters, trifid like creatures, aliens, beast from marvel, sword fighting and robots. love all of the above in books but in 6 hours with no coherence utter rubbish.

One of my favorite authors

One of my favorite authors writes a beautiful action packed interesting story and it gets read to me by what seems to be a text to speech program. It’s unfortunate the narrator did this story no justice. For that reason alone I had to force myself to keep listening instead of just sitting back and enjoying another great story from Brian Keene.

not much to write, back ground noise and the narrators voice wanted to put me to sleep. Brian Keene rocks just seemed thrown together.

The first thing to note here is that the Lost Level is a fun little pulp-era throwback story. You don't have to know Keene's Labrynth mythos (or really have any familiarity with his work) to enjoy the story. It's not high art. It's fun and an amusing distraction...
...if you read it to yourself. The fault of this story is 100% the narration. When I started listening, I honestly thought the narrator was doing an ironic imitation of William Shatner with awkward pauses in the middle of sentences (and sometimes in compound words). It quickly became a distraction in terms of trying to enjoy the content of the story. Then there was the constant mispronunciation of words- glaring mistakes that should have been caught. I don't know if this was the result of a disinterested director, but there really is no excuse for this not being corrected and cleaned up.

Great book but not as great in audio

I'm a big fan of this book. It's a mixture of scifi/sword and sorcery/adventure.

What was one of the most memorable moments of The Lost Level?

I really enjoyed the giant fight and the fight in the slug temple.

The narrator had weird pauses in the sentences almost like listening to a Charlie Brown cartoon. There were no changes to the voices of the characters. There was not a lot of emotion in the performance. The narrator may be more suited to technical books.

Was The Lost Level worth the listening time?

I didn't finish it. I was already familiar with the story and just wanted something for my evening walk.

love the story but the narrator not so much

as always huge fan of Brian Keene, however, this narrator with his strange pauses and audible shifting in his chair really distracted you from the story and made it hard to immerse yourself.

The story was excellent and kept me interested throughout and I can't wait for the second book. The narrator, on the other hand, was not great. His voice was fine and he did character voices just fine, but his reading was just that, reading. He would break up words with a pause in between. "I once went to a Motor. Head concert " those kind of things. Sometimes he would mess up and just reread the part correctly instead of the editor fixing it in post. Not great at all.

great story not so great narration

The story was great. The narrator was not. Pronunciation was terrible and awkwardly awkwardly placed pauses.

The story is awesome! So, good I had to get the sequel. The reading was very poorly edited though. Full of coughs, throat clears, strange word pronunciation, and breaks in the middle of sentences. He has a nice voice though, and with a little better editing this could've been a true masterwork.

I struggled with this novel because the narrator did not pronounce some words correctly and it drove me bonkers!

The story itself was not bad. But, without a good narrator it falls flat. It sounded robotic with no life to it and reminded me of one of those movies with bad acting.
It needs a better narrator.