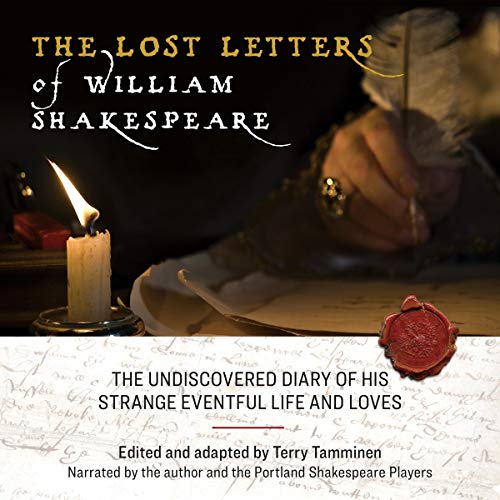 The Lost Letters of William Shakespeare

Could a treasure trove of 400-year-old letters constitute a previously unknown "diary" written by William Shakespeare? After 25 years of research, I believe the astonishing answer is yes. The Lost Letters of William Shakespeare: The Undiscovered Diary of His Strange Eventful Life and Loves reveals vibrant details from Shakespeare's arrival in London to the premiere of Titus Andronicus, his first play to be staged, along with political commentary on Elizabethan of England (and surprising insight into how it affects us today), as well a magnificent but tragic love story.

In 1989, I performed a one-man play about the life of William Shakespeare in London. "Miss B", an elderly woman was apparently sufficiently impressed by my impersonation of the Bard that she offered to show me some old, never-published letters that she believed were written by William Shakespeare. Although I was initially skeptical, it was an offer too good to pass up. What I discovered in these letters began to unravel almost everything I thought I knew about the great poet and playwright. My Prologue to The Lost Letters describes our meetings, more about my mysterious benefactor, and how - throughout my subsequent careers in business and public service - I spent over two decades decoding and researching what these letters had to say, in order to adapt this true story for the modern listener.

Overall, these remarkable letters represent a wealth of as-yet-undiscovered knowledge about Shakespeare's relationships, personality, and career as he carved out his place in the chaotic world of 16th-century London. Whether you are a Shakespeare scholar, merely a fan, or even if you have never read any of his works, the stories of the The Lost Letters will enthrall you with their fascinating and true tale.

What listeners say about The Lost Letters of William Shakespeare

I hope you enjoy listening to the audiobook as much as I enjoyed producing it with a team of outstanding actors in Portland Oregon. As much as the letters illuminated corners of Shakespeare's life and loves, much never before known, hearing them read aloud breathes ever more nuance and vibrancy into this amazing tale.

If the story of the letters is true, then this is a pretty amazing find... As such I proceed as if it is true... more fun that way!

My only criticism is the editing - occasionally the audio feels rushed from one paragraph to another as if the copy/paste was done without adding a second in between. I also listened while reading the book so I did notice small parts of the text removed, reordered or altered. This didn't really take anything away from this overall, but fur purity's sake...

Otherwise I was ever enthralled. The stories in each letter are fascinating but for me, a history teacher, getting a sense of the time and place was just brilliant. I felt emersed in the battle between Church of England and Catholicism, Britain and Spain, the desire to emigrate to the New World to seek fortune... The spy networks, the matters and intrigues at court, the toothless sailors spinning wild yarns... The crude humour mixed between sonnets and poetic language... The joys and sorrows he experiences certainly worked to inspire Shakespeare... again... if it's indeed true! One way or another, can't wait for book two!

This book is for people who enjoy mental time-travel. By the time when Terry’s journey with the plot of this book started, I was a 10-year-old boy, growing up in Estonia, a part of former Soviet Union. Under the regime, I did not understand why we lived as we did. Why we could not think and act freely. I did not understand it at all until we managed to restore our independence in 1991. Frankly, I still cannot believe that we had such a regime as the Soviet Union for 50 years, but that is totally another story. The reason I had to start my review like this was that my only rescue from this insanity was reading the books. The lively stories from history became my favorites. I guess that from that period of my youth the storytelling bug grew on me and that is why I enjoyed Terry’s book so much. I really do not need any proof if it is all 100% truth as the story itself is an adventure on many levels to enjoy.
As I have mentioned my interest towards time-travel, my most enjoyable nuances were the detailed descriptions of the atmosphere where the situation was taking place: the politics at the time, the environment and architecture, indoors and outdoors elements, temperatures at the location, time of the day, season, weather, fashion, lights, smells, tastes, feelings of happiness, success and sorrow – all of it. One of my most favorite writers is Sir Arthur Conan Doyle and his series of “Sherlock Holmes”. When most of the people tend to concentrate on the criminal case of those stories, for me it is the least intriguing part. For me, each time I open one of his books, I disconnect myself from this world and travel into London in the years of 1878-1903, where Sherlock Holmes adventures are described. I can breathe and smell those houses and places, feel the temperatures and lights. The lit fireplace in the dark room, where Sherlock was analyzing his next challenge while smoking his pipe. It takes talent to write like Doyle. But as this example does not match up with William Shakespeare story, I bring you a better one:
In 1844 a French writer Alexandre Dumas senior published a story of “The Three Musketeers” with the lead character named d’Artagnan, who was a poor young man leaving his home to go to Paris to join the elite guard of musketeers. Everyone who has read the book knows what I’m talking about, but if you have not, please do and you shall not regret. Those stories helped me to learn about France and Paris. The living standards, cuisine, fashion, ethics of the time. Again, an absolutely superb piece of writing.
What is the most magnificent part of this example regarding to the book review in question, is the timing. "The Three Musketeers” original story took place in years 1625-1628, even though it was finally published more than 200 years later. Why is this important? William Shakespeare lived in 1564-1616 and not that far away in England.
One might say that this period in history had a significant matter to the literature as such in several places around the world, certainly regionally in Europe for some reason.
“The Lost Letters of William Shakespeare” took me on a journey which is really difficult to describe, but as you’ve just read about my passion for such historical literature, you can imagine my satisfaction from reading it. What makes it even better is the author's Terry Tamminen´s personal story within the main story and frankly, I cannot say if one is more important than the other because they complement each other. Terry’s contact with mysterious Miss B, who lend him the letters, is something that gives me the chills even when I am writing this review right now. You will have a chance to learn how big and long term has Terry Tamminen’s passion for William Shakespeare actually been. But foremost I am extremely grateful for the letters itself. I don’t want to give the readers any wrong expectations that this book would be one long continuous adventure, building up excitement towards the end of the book. No, this is a book which actually contains personal letters from William Shakespeare to his best friend in his hometown Stratford - John Combe, “Coz”. While mainly sharing his events of the journey and rich experiences of a different kind, his dreams and goal to reach the land of gold, he is constantly asking his best friend to watch over and take care of his family left back home, in case anything should happen to him on his journey. As in Alexander Dumas “Three musketeer’s” d’Artagnan left home to go to Paris, so did the young William Shakespeare, leaving home to go to London in order to earn some money for the boat ticket that would take him to the promised land America with an expectation to return wealthy.
Being myself now 40 years old and a father of 4 children, I can honestly relate to the feelings that honorable William has shared privately to his friend in those letters. I can imagine myself into that period, and you know what, life is not that much different from today from the perspective of human behavior, emotions, ambitions and existence. Today we use computers instead of paper to write to our friends, and we move around on electric vehicles instead of horse carriages, but deep inside of our hearts and minds we have remained pretty much the same. We want to love and be loved in return while being able to take care of our dear ones in peace.
As this was the first bunch of the letters described in one book, I am looking forward to the next ones, to continue my journey in William's shoes in the late 1500s.

Dear Terry, I honor your passion and commitment of 30 years of stubborn work to be able to share this story with us. I do keep my hopes up that one day we will find out who was this mysterious Miss B and the background of the secrets of those letters.

Thank you from the bottom of my heart!

PS! I have read the book and also listened to the audiobook as my eyesight is not the best those days and the most comfortable time to read/listen to this book is either in commute or gym. The audiobook is as lively as the book, so I can recommend both without hesitation.