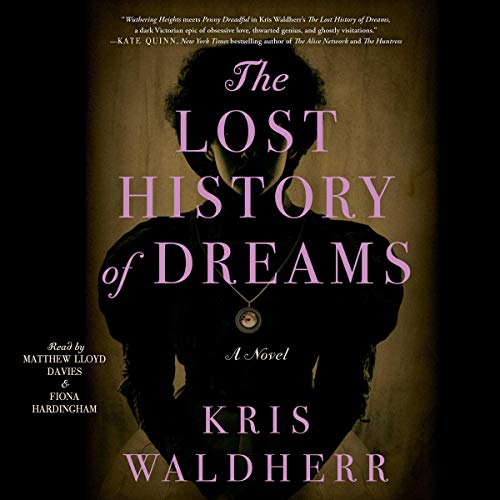 The Lost History of Dreams

A postmortem photographer unearths dark secrets of the past that may hold the key to his future, in this captivating debut novel in the Gothic tradition of Wuthering Heights and The Thirteenth Tale.

All love stories are ghost stories in disguise.

When famed Byronesque poet Hugh de Bonne is discovered dead of a heart attack in his bath one morning, his cousin Robert Highstead, a historian turned postmortem photographer, is charged with a simple task: transport Hugh’s remains for burial in a chapel. This chapel, a stained-glass folly set on the moors of Shropshire, was built by de Bonne 16 years earlier to house the remains of his beloved wife and muse, Ada. Since then, the chapel has been locked and abandoned, a pilgrimage site for the rabid fans of de Bonne’s last book, The Lost History of Dreams.

However, Ada’s grief-stricken niece refuses to open the glass chapel for Robert unless he agrees to her bargain: Before he can lay Hugh to rest, Robert must record Isabelle’s story of Ada and Hugh’s ill-fated marriage over the course of five nights.

As the mystery of Ada and Hugh’s relationship unfolds, so does the secret behind Robert’s own marriage - including that of his fragile wife, Sida, who has not been the same since the tragic accident three years ago, and the origins of his own morbid profession that has him seeing things he shouldn’t - things from beyond the grave.

Kris Waldherr effortlessly spins a sweeping and atmospheric Gothic mystery about love and loss that blurs the line between the past and the present, truth and fiction, and ultimately, life and death.

What listeners say about The Lost History of Dreams

If you like bleak 1850s British novels, you may like this book. It has lots of 1850s Bronte novel staples: A bleak house of mystery on the moors, several characters who are obsessed with other characters for reasons that never quite become clear, a kindly housekeeper, a deeply implausible sequence of events, and worst of all, a narrator whose constant changes of volume made it very hard to listen to this book in my car. The male narrator kept switching from a normal tone of voice to a whisper and then a near-shout. I kept having to adjust the volume so I could try to hear the whispered parts and not be blasted away by the near-shouts. There was also a female narrator, who was better.

I liked it but…

Whenever I read a book that goes back and forth in time, I’m reminded of Kate Morton’s books. She is the master of this storytelling style and I can’t help but compare at least a little. This book jumped around well enough but somehow I just fel a bit of whiplash.

The story was good but there were parts that just went on too long.

Overall, I’m glad I read it and enjoyed it mostly but felt like it could have been edited better.

A slow building story filled with gothic like dying wives who linger as ghosts while their mourning but none too faithful widowers endure wistful hauntings No one lives without regret. Everyone seeks revenge takes on assumed names and tells stories that could possibly be true. You never know until the end.

I never write reviews, but definitely want to give a heads up as we all know a narrator makes or breaks a story. I couldn't even get past the first chapter to find out if the story is for me as the reading went low and loud in such a way as riding a roller coaster. Looks like a cool story. Going to try the physical book.

A Must Read – Beautiful and Mysterious

Kris Waldherr’s novel The Lost History of Dreams is beautifully written, and is a story that keeps giving as I’m on my third read. I love both the hardback and the audio!