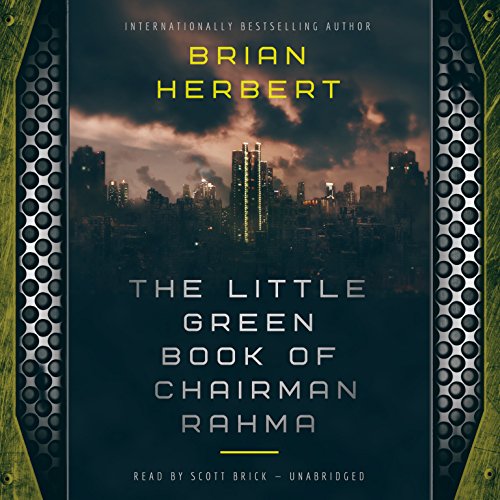 By: Brian Herbert
Narrated by: Scott Brick
Try for £0.00

A novel about saving the environment through totalitarian repression - by Frank Herbert's son Brian.

A revolution has taken over the government of the United States, and the environment has been saved. All pollution has been banned and reversed. It's a bright, green new world. But this new world comes at a great cost. The United States is ruled by a fascist green police state, and the corporations are fighting back. Joining them is an increasing number of rebels angered by the dictatorship of Chairman Rahma. The chairman's power is absolute and appears strong, but cracks are beginning to show as new weapons are developed by the old corporate powers, foreign alliances begin to make inroads into America's influence…and strange reports of mutants filter through the government's censorship.

The Little Green Book of Chairman Rahma is both thrilling and thought-provoking, revealing that human greed can poison even the most righteous intentions.

What listeners say about The Little Green Book of Chairman Rahma

After listening to all ten Harry Hole books by Jo Nesbo, switching to this book was a huge disappointment. It's so poorly written! The grammar and syntax reminded me of a high school English class essay, or an author's first attempts at writing fiction. Any author who uses phrases like "it sort of looked like..." or "just about..." is clearly brain-dumping narrative ideas.

The characters were poorly developed - the relationships between the male lead Joss and his two love interests were such sexist tropes they made me want to chuck my phone out the window.

The narration was alright, not bad, but a bit breathless and over-dramatic.

I almost returned this book, but decided to finish listening and give it a chance. I enjoyed hearing about a few of the scientific/technical concepts such as "greenforming" and being persecuted for "eco-crimes," but I just could not get past the atrocious writing.

I realize that, ironically, my review is quite poorly written. Maybe Brian Herbert's style is rubbing off on me. Blech. Time for a well-written palate cleanser!

I actively disliked the Dune prequels, but I had such high hopes for a non-Dune book by Mr. Herbert, having not read anything but a few of the prequels. Alas, this was so bad that it was embarrassing. The author obviously didn't spend any time researching environmental law or the basic tenets of the numerous environmental movements in this country in order to form a complex, realistic picture of what an environmental utopia/distopia might actually look like. Instead, the "environmental" dictatorship created in the book was wholly unbelievable. The Chairman owes more to Stalin than any actual enviro-activist or government employee. The world of this book is just silly and facile, rather than any actual exploration of environmentalism run amok, which, honestly, would make for an interesting book.

The rest of the book fails as well. The characters are two dimension, the plot nonsensical, and the sentence structure facile. I could go on, but that would be boring. In all, I'm highly disappointed.

Has The Little Green Book of Chairman Rahma turned you off from other books in this genre?

No, I'm a huge sci-fi fan. All this has done is turned me off from other books by this author. I so want to like him, but inevitably I just end up feeling annoyed by the wasted potential. I'm just not going to try anymore.

I've never been a big Scott Brick fan, but I don't think it's his fault that I dislike his performances. He narrated the Butlerian Jihad (Dune prequel) which was such an abomination (used in the BG sense of the word) that hearing his voice causes a form of post-traumatic listening disorder. Yes, I'm being dramatic, but, God!, that book was a travesty!

Not really, no. I hate being a hater, I really do! I want to find the silver lining in the cloud. But here, no, there are no silver linings. And the glass is bone dry, not half full.