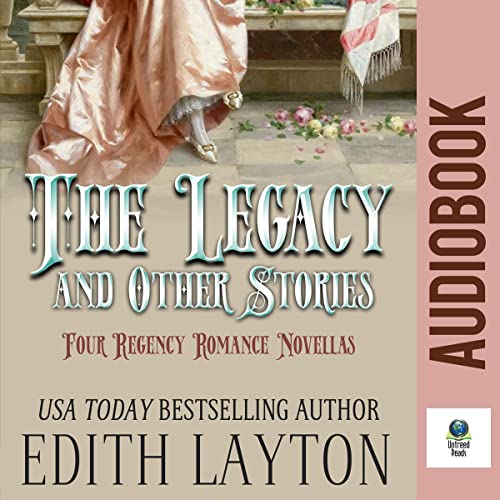 The Legacy and Other Stories

By: Edith Layton
Narrated by: Pippa Rathborne
Try for £0.00

Previously published individually, these four great novellas are collected in one book for the first time!

Valerian Blackwood is summoned to his aged uncle’s country estate to help the old man settle a problem with his heir. What Valerian finds is a mystery - and the love of his life. He only has to decide which is more important to him: solving the mystery or winning his lady.

What is Hannah Jenkins to make of the wildly attractive, silver-tongued man villagers bring to her family’s house after he is found injured on the shore near her seacoast home? He says he was the victim of pirates. But who is the pirate, and who is the prey?

June Heywood’s coming wedding day is clouded by a vicious remark she overhears, causing her to wonder why the handsome and clever Lawrence, Lord Morrow, ever asked for her hand. Who should she believe? Gossip or her heart?

A Marriage of True Minds

The bride’s sister and the groom’s brother, alike in temper, lock horns - all the while missing what their relatives can so plainly see.

What listeners say about The Legacy and Other Stories

Once again Pippa Rathborne makes magic. One can always trust her to infuse her performance with nuances that you know the author intended. Her voice is unique , her characterizations are distinct (Buried Treasure, amazing!) I am a long long time fan of the late Edith Layton and love her style of writing. She wrote with a cadence that is rhythmic…..melodious. I miss her works. Thanks to her estate for reissuing her stories and I hope that Ms Rathborne continues this narration collaboration.