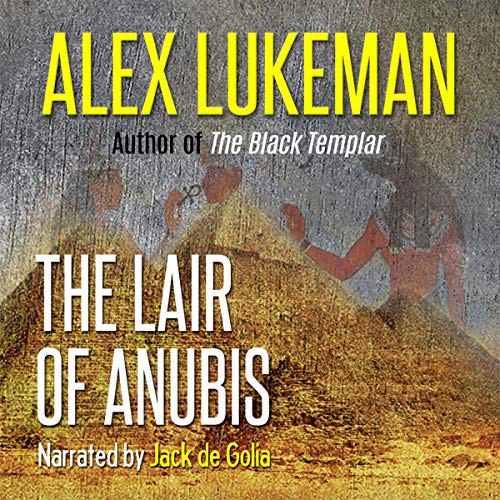 The Lair of Anubis

An ancient papyrus describing the death of Cleopatra reveals the secret location of the lost tomb of Alexander the Great, supposedly filled with priceless treasure. Elizabeth Harker sends the project team to Egypt to find out if the tomb and treasure still exist.

It doesn't take long before people start dying. A secret cult has worshiped Alexander as the Sun God for thousands of years, and they're not about to let unbelievers desecrate the tomb of their god. They'll stop at nothing to prevent it.

Nick and Selena are getting older, their bodies starting to show the effects of too many battles and too many wounds. With two children to worry about, maybe, it's time to quit. But neither one of them is quite ready to give up the adrenaline-fueled lifestyle they've been addicted to for years.

It's a decision they need to make soon. But first, they have to get through this mission, with no guarantee they'll survive.

What listeners say about The Lair of Anubis

enjoyable story, good characters, but not the best narrator. his voices are almost annoying and squirrelly

The Lair of Anubis

Nick and the crew are back for more adventures, but will this be the end of the Project? This is twice now that Nick and Selena's kids have been put in danger, and the crew is getting older and feeling the effects of all the times they have been shot and such. But when Selena is asked again to translate a papyrus for a museum it throws them back into there adrenaline filled life that fuels them while looking for the tomb of Alexander the Great and Cleopatra.

This is another wonderful book by Alex Lukeman, full of action, suspense and danger galore. I love these books and this series, the characters have become my book family, it is escapism at its best for me. The wonderful narrator Jack de Golia has transported me to there missions and this audio is no exception. I love that I can lose myself in his voices for the characters and it's like I am right there with them on the mission fighting, hurting, and laughing with them. This is a great book and a awesome audio, I hope he keeps on writing them because the day it comes to a end will be a sad day indeed.

Museum curator asking for translation, we have an old Egyptian papyrus. Another intriguing plot and with good narration. A winning combination of intrigue. Given audio for my voluntary review and my honest opinion