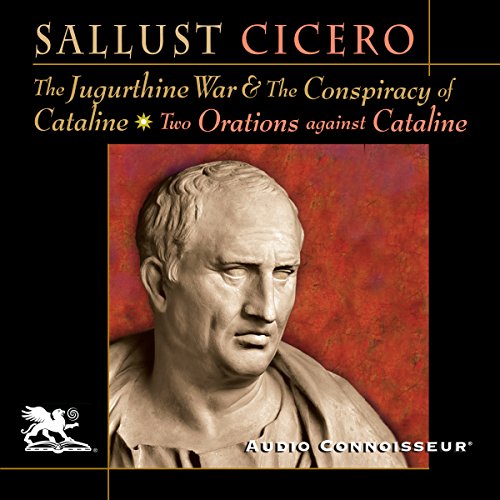 The Jugurthine War & The Conspiracy of Cataline

By: Sallust,Cicero
Narrated by: Charlton Griffin
Try for £0.00

A bloody revolt by a North African prince and a plot to seize control of Rome are the subjects of two short masterpieces of ancient history by the illustrious Roman chronicler, Sallust.

The Jugurthine War tells the story of the crafty Numidian, Jugurtha, his brutal lunge for power beginning in 118 B.C. and his capture and execution in 106 B.C. It is a tale of pitched battles and savage guerilla warfare, failed peace conferences and corrupt officials, treachery and heroism.

The Conspiracy of Cataline is a gothic tale of revenge, violence, and naked aggression in the pursuit of power. Its most famous participants are Cicero, the young Julius Caesar, and Lucius Sergius Cataline. Cataline is described by Sallust as "a guilt-stained soul at odds with gods and men, who found no rest either waking or sleeping, so cruelly did conscience ravage his overwrought mind".

Hear the peculiar power in the dramatic prose which Sallust employs in these two great works. They are not only a magnificent example of the gravitas of the Latin language in the hands of a master, but also a valuable source for the speeches of some of history's most famous leaders. Translated by Handford, Lord, and Blackistone.

Also included on this volume:
With Cataline himself present in the Roman senate chamber near the end of 63 B.C., Cicero hurled at him one of the most superb examples of oratory ever known, the famous First Oration Against Cataline which was memorized by schoolboys for a thousand years. As the speech continued, the senators who were seated in the vicinity of Cataline quietly got up one by one and moved away from him, leaving him alone on one side of the senate chamber staring at the floor. Upon its completion, with applause for Cicero still ringing in his ears, Cataline walked out of the senate building and left Rome. Listen as this spine tingling example of oratorical bravura engulfs Cataline!

What listeners say about The Jugurthine War & The Conspiracy of Cataline

The Publisher's Summary is accurate. The speeches by Cato and Caesar are extremely powerful and relevant to our own time. One wonders how much greater our appreciation of these speeches would be if we could hear and understand the original Latin. Imagine sitting in the Roman Senate as these men spoke, with impending death and slaughter hanging in the balance and permeating every thought. It is curious how certain centuries seem to produce a group of extraordinary individuals. The first century BC was one of these centuries. We have Sallust to thank for recording the lives and times of these people, and it is no exageration to say that we have Charlton Griffin to thank for pulling the work of Sallust into the twenty first century and performing it with such excellence that everyone with an interest in human history will thoroughly enjoy it.

I absolutely loved this book. From the way Sullust tells the story to Cato and Cicero's speeches. The narrator does an amazing job when delivering the speeches. I highly recommend this

Another classic banged out while in quarantine. Going through the whole list narrated by Charlton. His Oxford baritone really nails it.
Xenophon is next.
Enjoy Sallust.
If you know, you know.

Gaius Julius Would Be Proud

The quality of everything except table of contents is great. This publisher just blocks out time as "chapter 1/2) but no other information. I should he able to open the table of contentsand find the orations against catalone as a heading somewhere, but I don't. Instead you get to blindly click through each chapter hoping to find what you want. The narrator is great.

I think way more highly of Sallust after this and Cicero's speeches on Catalina were simply amazing. Compelling account of both and the narration is top notch!

I loved every moment of this book, particularly the orations of Cicero at the end. The narrator is fantastic.

The arrangement of the telling is odd. I thought I'd missed something when they described the fate of Cataline... before they got around to telling you who he was and what he'd done. Cicero does Tarantino (Pulp Fiction).

Cicero’s orations are brilliant. Winston Churchill must have studied them. And Sallust is a pleasant surprise; his literary style is impressive. The narration by Charlton Griffin is magnificent.