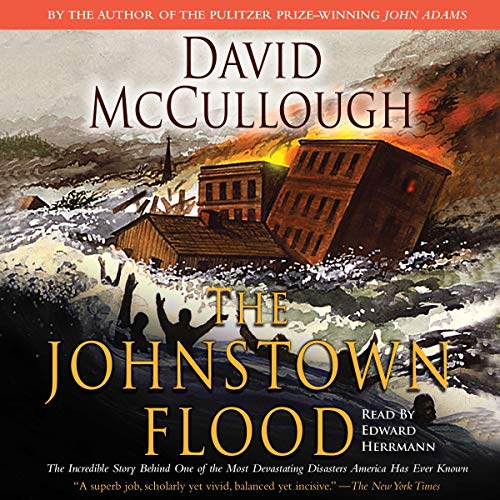 By: David McCullough
Narrated by: Edward Herrmann
Try for £0.00

At the end of the last century, Johnstown, Pennsylvania, was a booming coal-and-steel town filled with hardworking families striving for a piece of the nation's burgeoning industrial prosperity. In the mountains above Johnstown, an old earth dam had been hastily rebuilt to create a lake for an exclusive summer resort patronized by the tycoons of that same industrial prosperity, among them Andrew Carnegie, Henry Clay Frick, and Andrew Mellon. Despite repeated warnings of possible danger, nothing was done about the dam. Then came May 31, 1889, when the dam burst, sending a wall of water thundering down the mountain, smashing through Johnstown, and killing more than 2,000 people. It was a tragedy that became a national scandal.

Graced by David McCullough's remarkable gift for writing richly textured, sympathetic social history, The Johnstown Flood is an absorbing portrait of life in 19th-century America, of overweening confidence, of energy, and of tragedy. This is a powerful historical lesson for our century and all times: the danger of assuming that because people are in positions of responsibility they are behaving responsibly.

What listeners say about The Johnstown Flood

An horrific and sad tragedy

I listened to this book over some weeks. So compelling was it, I hated having to stop it but actually so overwhelming I think it was probably better to do it this way. This event is skillfully brought to life by the author, thoroughly researched and very balanced. It would have been easy to apportion blame but he doesn’t seek to do this, just telling the build up to these events, the tragedy itself and the aftermath in a way that seeks to look at every aspect. This is a book that is so powerful it will stay with me.

For those who like history this is a must. It builds a picture of living in Johnstown before the flood and the appalling consequences of a major disaster.

This is one of the best books I've read on any subject. It is as well-researched as a good history and as superbly paced as a well-written novel. I first read it about ten years ago, making the mistake of starting it in the evening. I ended up staying up all night to finish it! Then I lent it to my brother, who also stayed up all night to finish it! I recently reread it via audiobook -- it is still as gripping as ever!

The story of the Great Johnstown (PA) Flood of 1889, the result of a record-setting rainstorm speeding the failure of an earthen dam, was the top story of its day. The catastrophe, in which over 2,200 were killed, dominnated the front pages of newspapers around the world just as the terrorist strikes of September11, 2001 did in our generation. In fact, until 9/11, it was the single largest loss of American civilian lives in one day (the greater number of deaths of Galveston hurricane disaster of 1903 happened over several days).

Despite the media attention the Flood recieved in its day, it has been all but forgotten to most Americans. Yet it has plenty of lessons to teach the 21st century: altering the environment without consiering the consequences begs disaster; people in positions of authority (the owners of the dam was a secretive club whose members included the likes of industry moguls Andrew Carnegie and Henry Frick) don't necessarily act responsibly. The better side of human nature also shines through: despite the fact that their home towns nearly scoured off the map, the survivors of the Flood began almost immediately rebuilding their homes and businesses. The world responded to stories of the Flood with an unprecedented out-pouring of charity.

In my 2.5 years as an audible listner, this is the best work I have so far listened to!
The author does an excellent job in setting up the background leading up to the envents that it made me feel as if I was there on that fateful day watching the turn of events.
Also, the reader, Edward Hermann could not have done a finer job.

Having listened to quite a number of audible selections, including numerous McCullough books, I am quite sure that this narrator is the best of the best. I hope he produces more recordings because he adds so much by his natural and unadorned narrative style that any book he would read, would be worth hearing.

The story behind the lyrics...

I first heard a reference to this American tragedy from the lyrics of Bruce Springsteen's _Nebraska_ album in the early 1980s, and knew it must have been really bad.

This book tells the whole story of the events of that day, as well as what led up to it, the tragic aftermath, and the stories of the heroes and heroines both during the flood, and those who helped the survivors, including Clara Barton, who chaired the American Red Cross in its first major peacetime relief effort.

Meticulously researched, and for the most part, very well written by Mr. McCullough. Listeners should note that the chapter numbering for each part of the book starts at 1, and it's easy to lose track of where you are...

The 'horrible tempest,' with flood and fire...

"It had been the 'horrible tempest,' with flood and fire 'come as a destruction from the Almighty.' It had been awful, but it had been God awful."
― David McCullough, The Johnstown Flood

I was wrapping a couple of my first edition, eBay book purchases with mylar and discovered my first edition 'The Johnstown Flood' had a bit of water damage to the spine. I took this as a positive portent (ex dīrīs diluvium?) it was time to read it. One couldn't find a better divination that it is time to read a book unless one stumbles upon a pressed butterfly in a Nabokov or dirty photo in a Henry Miller at the Library (which reminds me I need to start carrying butterflies and McGill postcards into public libraries regularly).

I'm not sure what if there is a specific word for the disaster history genre, but I've recently read The Big Burn: Teddy Roosevelt and the Fire that Saved America, and now I've just finished a flood history, I've read about volcanoes (Krakatoa: The Day the World Exploded) and earthquakes (A Crack in the Edge of the World), so now I just need plagues and pestilence histories and I'll be able to fill my disaster dance card (programme du décès?).

This is McCullough's first book, published in 1968. He was an early master of strong narrative histories. Having been trained at Yale in English and almost fumbled by grace, accident, talent or opportunity into historical writing. Once he started publishing, Mccullough has almost never been a disappointment to his publishers. He now reigns as one of the supreme masters of American popular biography, along with Walter Isaacson, Jon Meacham, Joseph Ellis and Doris Kearns Goodwin. These are the Costco historian set. They aren't always the 'best' or most rigorous historians, but there is a certain skill in being able to carry a story to the historically, unwashed masses. There are certainly better academic historians (Burlingame, etc), but McCullough's skill at telling a story and bringing his story-telling flair to the 1889 Johnstown Flood, makes the history of this very American disaster not just a moving story, but a very good social history.

The story of the Johnstown Flood is the story of America in the late 1880's... robber barons, the industrial revolution, a careless disregard for human life and safety, railroads and telegraphs, the power of nature overwhelming the works of man, heroism and cowardice, disaster on an unimaginable scale followed by compassion on an even greater level.

This is the quintessential book about the flood, read by Edward Herman, one of the great actors of our day. It is detailed, fascinating and sobering.

This book is for you.

I can see the wave of water in my mind...

Aside from a paragraph in a high school history text, I knew nothing about the 1889 Johnstown Flood that killed over 2,000. David McCullough has distilled and organized a mountain of information into this very readable, heartbreaking but often humorous account.

It starts a bit slow with how the dam came to be built, abandoned, scavenged and restored... but before long I was holding my breath and then taking a slow motion ride with the wave down the mountain. At times on a floating roof, mattress or in a train car... though the small towns on the river and on into Johnstown. After reading I did an internet search of images and found I had formed very accurate pictures in my mind.

The book follows up nicely with the rush of aid (first response of the Red Cross), reporters and finishes with the resulting lawsuits. So interesting how everyone knew there was a high risk of the dam giving way, but no one prepared for it.

Rich in detail and thoroughly researched. I am from the area where the flood occured and while listening feel that I am transported back in time.

I have listened to many of David McCllough books, actually my first audible book was his novel 1776. Although nonfiction it reads more like a novel with an excellent description of the devastation created by the Johnstown flood. If you like American history this is a must listen.

About a third of the book is a lead up to the flood, about 1/3 is the flood, and the reminder is the after investigation of the flood. In the end one can suppose mother nature was mostly to blame. THe description of a eighty foot wall of water that tore down the valley after the collapse of the dam is gripping. It is interesting to here the tales of what separated the living from the dead, mostly plain dumb luck

As the title states, to hear this book is like you were there. A lover of history will surely like this.....an amazing event described wonderfully and narrated very well.